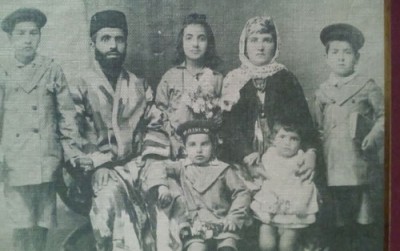 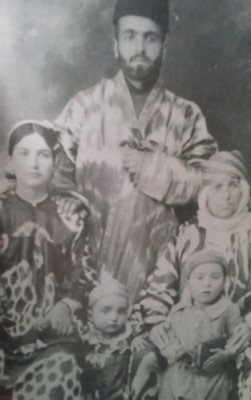 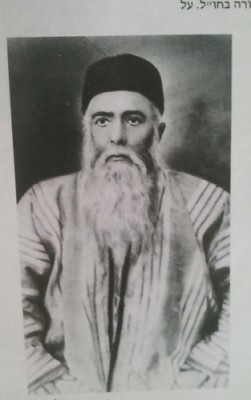 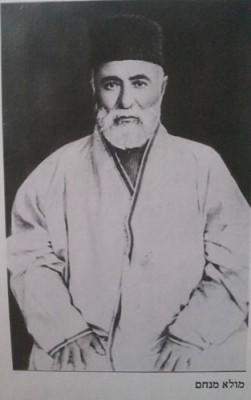 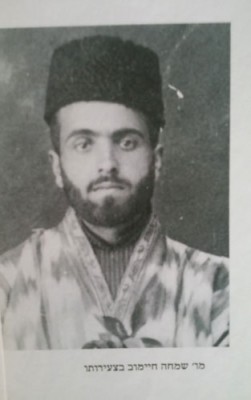 In the city of Karmina (Navayee) lived Mula Haim (Haimoff), a well-respected rav and community leader. However, Rav Haim always aspired to live in Eretz Yisrael and learn Torah in the Holy Land. So, against all odds, Rav Haim packed his bags and left his entire extended family behind; he was adamant about his decision. Most of Rav Haim’s children were already married and established, and he left the community in the hands of his renowned (for those from Navayee) firstborn son, Mulla Menachem.

Bukharian Jews started traveling to Eretz Yisrael in 1871, paving the way for all those courageous enough to follow in their footsteps. It must be noted that, as opposed to most communities, the Bukharians were not chased out nor were they running from any Pogrom. On the contrary, they were very well-to-do and settled. The movement was purely lishaim shamayim. Rav Haim was already 65 years old; people began to fear relocation due to the political civil war atmosphere that was emerging in Russia at that time. However, nothing could deter Rav Haim, his wife Mazal, and their 11-year-old son Simcha, and they began their voyage in 1911. They were escorted to Eretz Yisrael by Mulla Menachem. Mulla Menachem then returned to Karmina in order to lead the thousands of Jews there in the path of the Torah. A little while later, another son came to visit R’ Ephraim, along with his 7-year-old niece Frayha. Things went pretty well for about three years, all until WWI broke out.

During 1914, the Ottoman Empire ruled over what was then called Palestine. Turkey was a world power, and played a pivotal role in the war. Russia had much more on their plate than they were able to handle. Aside from being involved in the world war, they were struggling with their own civil war–the Bolshevik Revolution. Since the Ottoman Empire sided with Germany (against Russia), an immediate “iron curtain” developed between Russia and Palestine. Chaos was now building up in Shchunat Habukharim. From 1871 to 1914 the holy community was primarily funded by all the Bukharians in Russia (Uzbekistan, Tajikistan, etc.), but it now came to an abrupt halt. Hunger became a reality, and aside from all this, the wealthy Bukharian Jews in Russia lost all their riches to the new communist government that was formulating under the Bolshevik leader, Lenin.

In the year 1916, Rav Haim was nifter at the age of 70. His widow had no money to pay for the hevra kadisha’s burial services. Only because another wealthy man died that same day (Binyamin Yochananov), and the hevra kadisha was going to the cemetery anyway, Mazal was able to convince them to bury her husband. She had to sell the little silver that she owned in order to pay for Rav Haim’s shrouds.

Sixteen-year-old Simcha was now bereaved of his father, who was also his childhood rebbi. The situation in Yerushalayim was very bad, especially for the Bukharians, since they were looked upon by the Turks as Russian enemies. Many young men fled to Egypt, Syria, or other neighboring countries in order to flee the army draft and Russian espionage claims. Simcha spent most of his teenage years hiding in immense fear from the Turkish authorities. Once Simcha reached the age of 17, the Shadchanim begin inquiring about him. The market for potential chatanim was very scarce. Simcha was considered a commodity in Yerushalayim, especially considering the fact that he was a true child prodigy and a very learned talmid chacham. Instead of freeing himself from the sorrows of poverty and marrying the daughter of a rich man, Simcha adhered to the wish of his elderly widowed mother. Mazal figured that if Simcha would be capitalized by a rich family and someone else would marry her astonishingly beautiful 14-year-old granddaughter Frayha, she would be abandoned, to say the least. So Mazal was adamant about Simcha marrying Frayha, and so it was.

The two got married and continued their life of poverty. Simcha was very diligent about his studies and blossomed into an enormous talmid chacham. As time went on, children were being born and the destitution was getting worse. Very often, Frayha would wonder if there would be grape juice for Shabbat. But nothing deterred Rav Simcha; he tried supporting the family in every way possible and simultaneously proceeded with his avodat hashem.

Rav Simcha served as a highly qualified shochet, sofer, mohel, and chazan. When his third child, Binyamin Chai (Rabbi Yigal Haimoff’s father), was born, he was accepted into the elite kolel of the legendary Porat Yosef. In the kolel, he had the zechut to learn under Chacham Ezra Atiah, where he excelled tremendously. Rav Simcha eventually learned dayanut by Rav Yosef Yedid Halaivi, arguably the greatest Av Bait Din in Yerushalayim. Baruch Hashem, despite the financial hardships that the Jews of Yerushalayim were going through, Rav Simcha was now amply managing to support his family. He lived in the special apartments that were allocated to binai Torah such as himself, Rav Avraham Aminov (Talmudi), Rav Shlomo Leib Eliazarov, etc.

Rav Simcha had two main chavrutot: Rav Yehudah Ari Haimov (Dayan and Chief Bukharian Rabbi of Yerushalayim) and Rav Yehuda Tzadka (nephew of the Ben Ish Hai and soon-to-be Rosh Yeshiva of Porat Yosef). Throughout these years, though Rav Simcha was relatively young, he suffered from a heart condition. It was his powerful perseverance and yirat shamayim that helped him obtain such an unusual success in such a short period of time. In the words of Chacham Ovadia Yosef, “Rav Simcha Haimoff was a Torah genius and his descendants are considered binan shel gidolim.”

Rav Simcha was most popularly known for his drashot, which lasted for hours. His righteousness was paralleled only by his encyclopedic knowledge of Torah. In fact, I once came across a five-volume biography set that included gedolim such as the Chafetz Chaim, Ben Ish Hai, Rav Chaim Soloveichik, etc. To my excitement, I couldn’t help notice Rav Simcha Haimoff’s name in the glossary. I quickly looked it up to see how this book would captivate this gaon in a couple of lines. The following is what was written: “A tzadik who would tremble every night by his bedside dreading the possibility that maybe someone might have been offended by him in anyway and that Hashem should please forgive him.”

At the tender age of 36, Mulla Simcha’s condition deteriorated considerably. He was barely able to walk; very often people had him commute by private car service in order to merit his services. His time had come. Lying in his hospital bed, Rav Simcha’s holy nishamah returned back to the creator on the day of Simchat Torah.

Rav Simcha left behind a young wife and eight children; the oldest was 16 and the youngest were one-and-a-half-year-old twins. Times were very tough for the family, but in the words of his son Aryeh, “It was the unity amongst the siblings that got them through those tough times.” After a few tough decades, the family made a complete recovery, and as a token of gratitude to Hashem Yitbarach, the family (at large) has contributed tremendously to Klal Yisrael–specifically to the global Bukharian community.