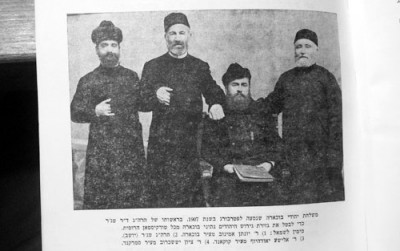 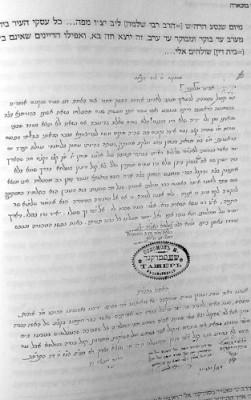 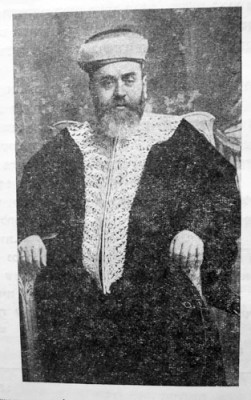 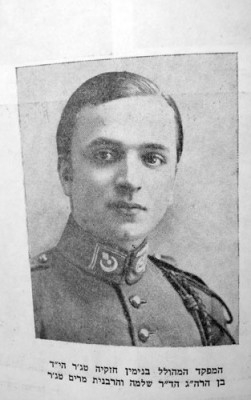 Born in 1866, on the 26th day of Shivat, Rav Shlomo was privileged to grow up in Yerushalayim. His father was Chacham Moshe Tajir, the Rosh Av Beit Din in Yerushalayim. Rav Shlomo took advantage of his young age and developed into a young talmid chacham. When he turned 30, he accepted a position as a rav in Turkistan. Eventually, that position graduated to chief rabbi, a position he held for 18 years. While there, he married Miriam Pinchasov, the daughter of the esteemed Pinchasov/Mamon family of Bukhara.

In the year 1914, when he was 48, Rav Shlomo returned to Yerushalayim. Following a post as Chief Rabbi of Beirut, he eventually took up an offer to be a rav in Damascus, Syria. It is very interesting to note that although Rav Shlomo himself was not of Bukharian descent – he was of Turkish lineage–he considered himself Bukharian, despite the fact that he only spent a mere 18 years in Turkistan. Furthermore, he served as rav in Damascus, a place in which people take tremendous pride in their identity. In spite of all those opportunities to identify himself as one of those prestigious identities, his family identified themselves as Bukharian Jews. His children were barely 10 when he left Turkistan and mostly ended up in French universities in Syria. Nevertheless, they attended Bukharian shuls when they settled in Eretz Yisrael. In fact, the main book that is used to write all these articles, Toldot Yihudai Bukhara (printed in Manhattan in 1967), was written by Rav Shlomo’s son, Mr. Nissim Tajir. To me personally, that is an inspiration.

When Rav Shlomo was niftar on the 8th of Heshvon 1936, the people of Bukhara sent three prominent members from Rav Shlomo’s pre-1914 community in Turkistan. From Samarkand, David Eliasov; from Tashkent, Abbo Chiya Rubinov; and from Kakand, Pinchas Mordachaov. All three were present by the grand debate that Rav Shlomo (along with other rabbanim) held against many priests and sheiks. The debate was recorded in the Ginzai Yerushalayim by Pinchas Graivski, in the year 1936 (#117). In honor of Rav Shlomo’s Shloshim, these three representatives came to present the following story. “For us to begin singing the praise of Maran Shlomo Tajir, as much as we talk, we would always remain at the beginning. All what he did for us as the Chief Rabbi of Turkistan for 18 years was a gift from Hashem Yitbarach. However, something we must say–to remind and to reveal a breathtaking event that took place by our Rav. In 1910 the General Samsonuv orchestrated an edict of expulsion for all Jews in Turkistan. Rav Shlomo realized the danger that lurked over us while it was still benign. Without any hesitation, Rav Shlomo led a delegation of rabbanim to St. Petersburg in order to put a halt to this atrocity. There have been similar edicts on our community, during which Rav Shlomo stood at the forefront. Interestingly, aside from the essential qualities of Rav Shlomo, like being a gaon in Torah, one of the tools that opened many doors for Rav Shlomo was the fact that he was fluent in 12 languages. It’s amazing how much avodat Hashem a person can accomplish using the talents that Hashem has bestowed upon him! Another such event took place in 1906, when the sheiks and priests tried to make a joint protest against the rights for shchitat yihudim (Jews slaughtering animals). Rav Shlomo requested a chance to regain his rights. Being an amazing orator. Rav Shlomo led a three-day public debate independently against a handful of enemies led by General Sovoteej (yimach shimo). Baruch Hashem, Rav Shlomo prevailed.”

The three Bukharian representatives continued. “Parallel to his immense Torah knowledge was his righteousness. His home was always open to everyone and his donations to widows and orphans ran on a blank check policy. Rav Shlomo was a great advocate about Jews speaking Hebrew and ideally living in Eretz Yisrael. In fact, he even wrote a haskamah for Rav David Kolyakov when he came out with his Bukharian/Russian/Hebrew dictionary.”

Rav Shlomo was active in all Jewish communities, being that he was fluent in so many languages. While he was a rav in Syria, the years 1928-1930 were very scary. Arabs began rioting, claiming that Jews were forcefully throwing Arabs out of their houses in Eretz Yisrael in order to dominate the land. The Arabs tried to create a Jihad (holy war) against the Jews. When Rav Shlomo got wind of these events, he quickly got on the scene and wrote an article in the French newspaper Liziko di siri, convincing the Arab community that these claims on the Jews are all lies and that the Arabs of Eretz Yisrael sold their homes wholeheartedly to the Jews for a fair amount of money.

In 1930, Muslim businessmen of Damascus accused a Jewish official of speaking outward blasphemy against the Muslim religion along with ridiculing the Muslim Prophet Muhammad. The Jewish community was terrified that after the court convened on the matter, the entire community would suffer horrifically. Especially with false witnesses against the Jewish official, the picture wasn’t pretty.

Rav Shlomo immediately made a crash visit to the notorious anti-Semitic Prime Minister, Ata bee al Ayoovee. The Prime Minister let him in, but before he even had a chance to sit, he told the Rav, “If you came to change my mind about the court case you can forget about it.” The Rav replied, “I came to make sure you wouldn’t regret something.” “Speak your case,” said the Prime Minister. “How can you comfortably accept such a dangerous responsibility upon yourself? Something that can cause blasphemy on your religion by your actions alone,” asked the Rav. “What are you referring to?” the Prime Minister questioned. “Well, you are aware that currently, the French mandate is strongly involved in Syria. Therefore, every court case consists of three judges, one of who will be a Frenchman. The French judge does not understand Arabic; you will therefore need the (false) witnesses to utter with their own (Muslim) mouths the blasphemy that they claim the Jew spoke against Islam.” At first, the anti-Semite Ata bee was speechless. Then, he turned to the Rav and stated, “Although I know your prime motive is to save your fellow Jew, you have nevertheless convinced me about the repercussions. I will therefore dismiss the case.”

Chacham Shlomo Tajir lost two sons in the French\Syrian Army: Aryeh, 55, and Binyamin Chizkiya, 31. Rav Tajir was survived by his son Nissim, who was very active in the Bukharian community. Any Bukharian who lived before 1973 Israel has heard of Nissim. Chacham Shlomo left an illustrious reputation in many Jewish communities across the globe as a paradigm leader of the entire Aidut Hamizrach (Sefardi) community.