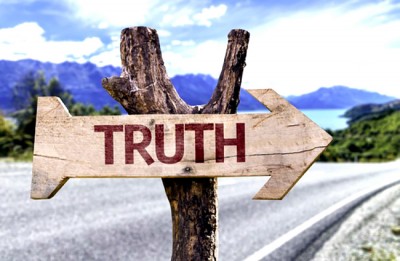 Truth and peace are ultimate values in Judaism. But what happens when there is a conflict between them?

The surprising answer is found in our Torah reading this week.

The Torah reading of Vayeira opens with Hashem informing Avraham and Sarah that after decades of barrenness, a son would be born to them. Sarah received the news with astonishment, because the time when she was able to give birth had passed long ago, and there was no way she could naturally give birth.

The Torah describes Sarah's astonishment in the following verse: "And Sarah laughed within herself, saying, "After I have become worn out, will I have smooth flesh? And also, my master is old." How can I give birth? My husband, Avraham, is too old to give birth”

Hashem’s response to Sarah's laughter was not long in coming: "And Hashem said to Abraham, ‘Why did Sarah laugh, saying, “Is it really true that I will give birth, although I am old?”’ If we look carefully at the words, we see that Hashem didn’t quote Sarah exactly. Sarah didn’t say “I am too old”, but “my husband is too old.” Why did Hashem changed her words so it sounded like she was attributing her barrenness to herself instead of to Avraham?

Our sages learn an important lesson from this change: we know that Hashem’s seal is truth. Truth is the very foundation of Judaism. We declare in the Shema, "I am Hashem your G-d — this is the truth!" The Torah teaches us to maintain the truth at all costs and stay far away from falsehood.

Yet despite this, Hashem changed the truth when the truth might cause controversy. When it comes to maintaining peace between a husband and a wife and between a person and his fellow man, our sages teach us that we are permitted to change the truth. Since Sarah’s words might be interpreted as if she is laying the fault for their barrenness on Avraham, Hashem changed her words and had Sarah admit that the fault was hers. "I am old,” Hashem quotes Sarah, instead of “my husband is old.” He did this to maintain their domestic harmony.

Aaron was also famous for this principle of “it is permitted to change the truth for the sake of peace.” Our sages tell us that when Aaron saw two people fighting, he would go to one of them and tell him that his friend was sorry for what had happened, and he regrets the whole incident. Then he went to the other one and repeated the same thing, how much his friend is sorry about what happened and how he would love to go back to how things were in the past and be friends again.

Sometimes Aaron had to go back and forth several times the same day, sometimes after several days, but the goal was always the same: he made sure to warm up the relations between the two until when they finally met — they immediately hugged, shook hands, forgave each other and were at peace with each other again.

When Aaron was trying to make peace between two quarreling Jews, he changed the truth. Why? Because peace is too important. It is so important that it even overrides the truth. This is because peace is the ultimate truth in Hashem’s eyes, even more than reality! This shows us how urgently we should avoid any controversy and conflict with our fellow man and with our spouses.

This is one of the major things demanded of us today, to feel as much love, brotherhood, and unity as possible, to do our best to speak to each other, dialogue, have a pleasant relationship, and not to talk about things that cause distance and irritation.