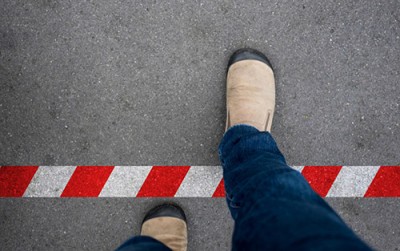 A couple came crying to me with their heart rending problem. Their lovely daughter got sucked into a whirlpool of self-destructive behavior including uncontrolled conduct, overdoing the alcohol, ignoring the people in her household, to the point she has eating disorders of bulimia and anorexia, hospitalizations and treatments.

After speaking with this young woman a few times, I came to the conclusion that all her acting out was really an internal shouting for clear steady boundaries though her actions seemed to show the exact opposite. On the outside it looked like boundaries were that last thing she was interested in. She didn’t seem to be they type to respond to someone banging on the table and saying “enough!” But it comes out, that is exactly what was missing in her life. Her parents full of regrets for the past were now afraid of her situation, afraid to act choosing to sit back and not make it worse, but she was getting worse.

In my first conversation with them I asked them if they ever had any parenting classes in order to get the necessary tools to help themselves and their children. I was not surprised when they said they didn’t take any such class. I explained to them that living is like flying a plane. Every pilot must learn to navigate, read the dials and warning signs properly, know what to do in emergencies how to take off and how to land. Actually, living is more complex than flying a plane especially since it affects others around you.

Anyone can make a mistake but the biggest claim against Aaron and Moshe in our weekly Torah portion that prevented them from entering the holy land was that instead of showing measured behavior when facing the nation that was riled up; they were swept into the storm as it says: “the nation fought with Moshe.” Moshe functioned not within his normal equilibrium and ended up violating Hashem’s command: and you should speak to the stone in front of their eyes and it will give its waters… and Moshe lifted his hand and hit the rock twice with his stick and much water came out.”

Everyone lost out from what ensued in our weekly portion. Hashem informs Moshe and Aaron that they will not merit to enter the promised holy land and that Aaron will soon die and the rest of the nation does actions that cause them death and harm.

Hashem really wants every Jew to take full responsibility for his actions, exactly where he and his mission presently are. This means that no one can say everything will be fine without hoping to face consequences for their bad deeds.

We can ask, if Hashem knows our inclinations that confuse and incite us in our path, why all the anger? The answer lies in the beginning of this Torah portion: “This is the decree of the Torah that Hashem commanded, speak to the children of Israel…” this is the medicine ready before the ailment comes. If we pay attention to plan out our path and fulfill what Hashem wants for us, we’ll be from those about who it says; “Therefore the rulers say, “let us make a reckoning”. Which reckoning?  The reckoning of the soul. And who are the rulers? Those who merit ruling over their inclinations.