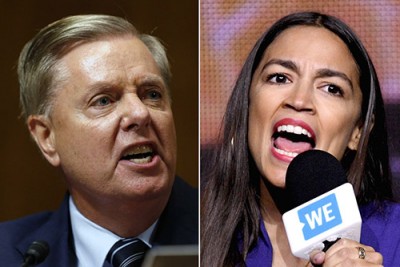 Years ago when the movie was a hit, I never quite understood the Forrest Gump adage. “Stupid is as stupid does” until this week when I read about two particular idiots and what they are promulgating. The first is the new Democrat darling Alexandria Ocasio-Cortez. This week she had the audacity to compare the plight of migrants in the caravan trying to get into the US illegally to the Jews fleeing the Holocaust.  She wrote in a tweet: “Asking to be considered a refugee and applying for status isn’t a crime. It wasn’t for Jewish families fleeing Germany. It wasn’t for targeted families fleeing Rwanda. It wasn’t for communities fleeing war torn Syria. And it isn’t for those fleeing violence in Central America.”

Senator Lindsey Graham of South Carolina responded to Ocasio Cortez.  He insisted that the  Nazi crimes against Jews are diametrically different from to the unrest created by the caravan at the southwestern border. Graham recommended that Ocasio Cortez take a tour of the Holocaust Museum in DC. She “pooh=poohed” that idea because in her mind she is a maven smarter than anyone else.

Senator Graham said of the congresswoman-elect,” You have to wonder has she ever seen a history book. How can she be this bad at making comparisons? We are offering asylum to those that are in need. It is just that the caravan has more job seekers than people in actual need of asylum. Mexico has already offered to take in a multitude of people. The remainder seems to be mostly out there to gain economic advantage. This is not a case of people escaping mass genocide as Ocasio-Cortez likes to claim”.

The problem with this outrageous tweet is the lack of education that our American youth are receiving. Ocasio-Cortez and other millennials lack basic knowledge of the Holocaust according to a survey released this past April by the Claims Conference.  Just a handful of states-California, New Jersey, Illinois, Florida, New York, Michigan and Rhode Island require students to learn about the Shoah according to Education Week.41% of those surveyed could not define the  Auschwitz concentration camp. 22% of the millennials either have not heard of or aren’t sure whether they’ve heard of it at all and  31% of the millennials believe 2 million or fewer Jewish people died in World War 11 at the hands of the Nazis.

Adding insult to injury according to New York Post’s columnist Karol Markowicz, “Jew hating has become too normal in America and liberal Jews often keep mum about it”. They are so afraid that they will not be accepted in the progressive left’s circle if they do. Is that why Senator Schumer hasn’t commented on Ocasio-Cortez’s tweet? He is certainly quick to respond to everything the President writes.

Another nitwit is Linda Sarsour. She is the Muslim Palestinian American activist that said, “When police officers in America shoot unarmed black people, Jewish hands lurk in the background”. She went on to criticize the ADL “If you believe in the idea of ending police brutality and the misconduct of law enforcement officers across the country, then you do not support an organization that takes police officers from America, funds their trips, takes them to Israel so they can be trained by the Israeli police and military and then they come back here a do what? Stop and frisk, killing unarmed black people across the country”.

Of course, what the police are really doing is training to deal with terrorism.  Another gem that came out of Sarsour’s mouth was: “Folks masquerade as progressives  but always choose their allegiance to  Israel over their commitment to democracy.” This is an example of the long list of anti-Semitic remarks she has made.

Last week Teresa Shook , the founder of the Women’s March publically called on LInda Sarsour and three other Women’s March leaders to step down  from the movement for working against the group’s desire for” a  world that is fair, just and inclusive of women and all people”. About Sarsour specifically, Shook said that she and her ilk, “have allowed racist rhetoric (Anti-Semitism) to become a part of the platform by their refusal to separate themselves from groups that espouse those racist hateful beliefs”.

On Thanksgiving Day Linda Sarsour tried to fend off the growing criticism of her embrace of Louis Farrikhan, among other things, without actually calling out his endless hate speech. This was an effort to get something on the record at a time when people weren’t paying attention so that she could pretend she’s resolved the issue. Sarsour is hoping she can get away with dodging the specific problem of her refusal and that of fellow Women March co-chair Tamika Mallory to condemn the Nation of Islam leader who spews anti-Semitic hate at every opportunity. She gave a knee jerked apology saying “we should have been faster and clearer to helping people understand our values and our commitment to fighting anti-Semitism. We regret that. She went on to say “every member of our movement matters to us including our incredible Jewish and LGBTQ members. We are deeply sorry for the harm we have caused. We see you, we love you and we are fighting with you”.

These women are not only ignorant of the truth; they are dangerous. They have no compunction to lie to their gullible sycophants in order to achieve their agenda. We need to oppose and expose these progressive leftists. The world has to know just who they are and how racist they are. We cannot allow their evil to influence the public.

“Stupid is as stupid does” can be a slippery slope unless we control it.

Cynthia Zalisky is the Executive Director of the Queens Jewish Community Council. She can be contacted at This email address is being protected from spambots. You need JavaScript enabled to view it.