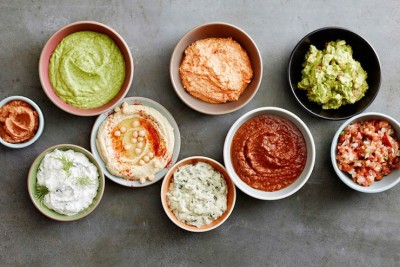 As we proceed full-steam ahead towards Kaballat HaTorah, I would like to take a moment to reflect back on one part of the Pesach Seder.

The third question is: On all other nights we don’t even dip once, but tonight we dip twice: the karpas in salt water and maror in charoset.

On all other nights we don’t dip? Seriously? In America it’s practically an obligation to dip French fries in ketchup! In fact, one who doesn’t squeeze half a bottle of ketchup onto his plate, douse his French fries in them, and then throw out most of the ketchup hasn’t fulfilled his societal obligation and likely has to eat the fries again! In addition, these days, in restaurants and fast-food joints, after choosing your meal, you then choose from an assortment of dips and sauces to coat your sandwich.

In 2021, eating challah without a minimum of three or four dips is practically unheard of. When we go somewhere for Shabbat, we’re often asked to bring dips. The store primarily sells an assortment and wide variety of dips. The incredible selection includes garlic, onion, babaganoush, falafel, pizza, pickle, hummus, techina, tomato, broccoli, and pepper - to name just a few.

In the Staum family, charoset was a big hit throughout Pesach. In contemporary lingo, the Staums would “pound” charoset. I should add that I was, and am, the one who makes the charoset. Before I was married, on Erev Pesach, my mother would provide me with quite a few apples, which I would hand-grind before adding the nuts and wine. I have maintained that practice until today.

This year, I made charoset not only for the Seder in our home, which included my in-laws, but also for my parents, who were hosting my brother and his family and my sister and her family.

Since I was making charoset for so many people, I knew I would need a lot of apples and a couple of bags of crushed walnuts. It wasn’t easy hand-grating all those apples (No, I wouldn’t use a food processor. Did my great-grandmother use a food processor in the shtetl?), but I made two large containers of charoset.

I was quite surprised that this year most of the charoset wasn’t eaten. I realized that every year we have more and more dips on our table throughout Pesach. The charoset now has major competition with numerous other kosher-for-Pesach dips. It therefore no longer takes center stage.

So, if anything, the question the child should be asking on Seder night is why are we only dipping twice and why aren’t we dipping the Maror into hummus or babaganoush?

But perhaps there is another dimension to the dipping.

The reason we dip our food generally is that we want the food to have the taste of the dip we are submerging it into. There’s particular enjoyment eating something with the added taste of the dip. However, when we dip the karpas and Maror, we don’t want to overshadow the taste of the Maror/karpas, only that it should be mitigated somewhat. In fact, the halacha is that after dipping the Maror into charoset, we shake off the excess charoset.

Maror symbolizes the challenges and pain of exile, and of life. My rebbe, Rabbi Berel Wein, often notes that we are the only people who recite a bracha on Maror. We don’t whitewash our bitter past and we don’t whistle past the graveyard. We confront the reality of difficult times and recognize that they are invariable. At the same time, we also seek to find the silver lining in all our struggles. We remind ourselves that everything G-d does is for the best and with a divine purpose. That may not take away the pain, but it certainly adds a certain dimension of sweetness to it.

That is the deeper symbolism of dipping on Seder night. The child – and the child within me – asks why throughout the year we douse our foods with delicious dips to add taste; but at the Seder, we seek to maintain the original taste of these bland/butter foods even while dipping it and slightly mitigating its bitterness and blandness without eliminating it. What a strange dipping! Where’s the kosher-for-Pesach Caesar dressing?

We answer by teaching our child that the Jewish people possess a rare combination of realism and optimism. We don’t negate or pretend that our situation is often bitter. Yet, at the same time, we have never stopped dipping that bitterness in the proverbial charoset of G-d’s sweetening of the bitterness. That faith has carried us through the darkest of times. That rare combination is part of the secret to our eternity.