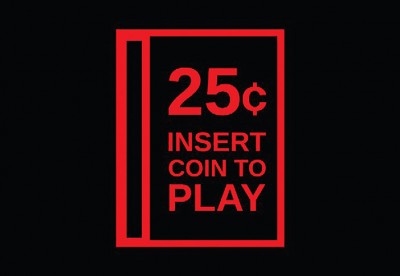 Yom Tov is truly a special time. The special tefillos, the meals, the songs, the meals, the camaraderie, the meals, extra time with the family, the meals, and of course the delicious meals. Chol Hamoed also provides a wonderful opportunity for family bonding (pronounced ‘kvetching’) and enjoying spending time together.

One of the many pleasurable moments I enjoyed on Chol Hamoed a number of years ago was watching our (then) three year old son Avi enjoying an arcade. For our two older children the arcade cost me some money. But for Avi the cost was minimal.

Avi plopped himself down on one of the virtual motorcycles attached to the game and turned the steering wheel with gusto as the game automatically made the turns. He gleefully made engine noises as he steered his car through windy roads at dangerously high speeds. He looked a bit confused when some large letters suddenly appeared on the screen and began blinking a few times, but a minute later the simulated game reappeared, and he went right back into his driving with passion.

And why should I be the one to tell him that he wasn’t really controlling what was happening? If he cannot yet read the words ‘Insert Coins’ why should I explain the concept to him? As long as he was content and felt that it was his doing, he was happy, and I saved a few dollars.

When he finished one game he went on to another and the same scene repeated itself.

How funny it is that this young impressionable child thinks he’s controlling what’s happening when really it had nothing to do with his motions and efforts.

I don’t know if angels laugh but do they view us in the same vein? We too feel that we are in control and are running every aspect of our own lives. But in truth it only appears that way, because life and its events are divinely simulated and ordained to occur exactly as G-d sees fit.

We do not see the words “Insert act of Kindness”, “Insert Charity”, or “Insert additional Prayer” flashing before our eyes. Still, we are aware that it is such acts which grant us the merit to remain behind our wheel and continue to drive (or at least appear that way).

The only problem was that in order to procure tickets which are redeemable for serious prizes, you have to actually play some games. So I did have to shell out some cash and we had to help Avi with a few rounds of skee-ball and basketball shooting.

When we were done he had racked up over 100 tickets! I was pretty sure he had enough tickets to get the 6 days-7 nights vacation getaway package to Miami. But I guess he fell a bit short because he was only able to get the little squishy thing which broke in the car on the way home. There’s a lesson in that too. But it’s a lesson our children will never learn.