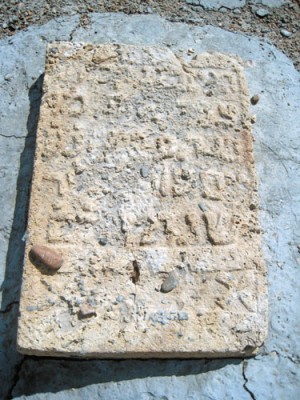 Chacham Yosef Mammon (1741[some say 1752]-1822) originated from Titon, Morocco. He was the son of Chacham Moshe Mammon a descendant of the Rambam. Rav Moshe was an esteemed talmid chacham who was a jeweler and money trader by trade, which led him to be a wealthy man.

At this point in history, Morocco was under Spanish control. Ultimately, two Sultans ruled over Morocco. The city of Titon was under the control of Abdul Kidir; the other Sultan, who controlled Fez, was Abdul Chasan. Rav Moshe was especially on good terms with both Sultans. He would lend the Sultans money and offered them jewelry at the proper occasions. In fact, at the annual affair, in honor of the King, Rav Moshe was honored with gifts. Rav Moshe developed a wonderful reputation among everyone in Morocco.

It once occurred that two individuals from the royal family were experiencing some sort of financial dispute. When the case reached the King’s throne, the King seemed puzzled as to what the verdict should be. The King then appointed Rav Moshe to judge the matter, being that both parties would agree to whatever Rav Moshe would say. Rav Moshe addressed the matter well and everyone witnessed how both litigants left the court peacefully and accepting. They were amazed. From that day on, Abdul Kidir, King of Titon, appointed Rav Moshe as the chief adviser of the high court of the King. A disadvantage that occurred post this amazing inauguration was that Rav Moshe broke all ties with Abdul Chasan, king of Fez.

Following this event, the King of Titon made Rav Moshe change his last name from Maimon to Mammon. Being that Maimon meant monkey in Arabic, the king felt it was degrading for a man of such stature to have such a name.

As the days went on, the two kings of Morocco were not on good terms anymore. In fact, it even came to the point that the King of Fez declared war on the king of Titon. King Abdul Kidir of Titon consulted with Rav Moshe, and Rav Moshe highly recommended that the King not go to war. King Abdul Kidir told Rav Moshe that he was just an adviser and had no authority to impose any decree over the King. With those words he handed his ring over to Rav Moshe along with the responsibility of all the king’s possessions and went off to war. The war proved to be disastrous for King Abdul Kidir, just as Rav Moshe predicted. All too soon, the soldiers of Titon surrendered and King Abdul Kidir fell into captivity. As the Jews fled the city of Titon out of fear, they begged Rav Moshe to join them in their voyage. Rav Moshe declined their very tempting offer stating that as he had taken full responsibility of all the belongings of the King, he could not just drop everything and run. Extended family and friends assisted Rav Moshe with the evacuation of the Rav’s family and possessions, leaving the Rav as the sole representative of the kingdom of Titon.

As the enemies made their way in they saw the city was evacuated. As the soldiers were going from structure to structure, they finally caught up with Rav Moshe. He was in the Bait Hakineset, adorned in his talit and tifilin. They approached him and said, “Your King has been captured and demands his signet ring back.” To that, Rav Moshe quoted the Talmud and said, “He who is disloyal to a deposit, it is as if he was disloyal to Hashem.” Upon hearing these words of loyalty the officer shouted out, “Was it not enough that you betrayed the King of Fez once that you decide to be so brazen?!” And with that, the officer killed Rav Moshe Mammon by the curtain of the Aron Hakodesh, may Hashem avenge his death.

Most of Rav Moshe’s family had fled Morocco with the exception of one son, his first-born, who remained in Titon. Another son, Baruch, fled to Sulimania and eventually was killed, since he was reluctant to heed to the command of the queen. Rav Moshe had another son named Yosef who fled to Damascus, Syria, along with his wife, son Yehuda, and two siblings, Shlomo and Rachel.

As time went on, the Mammon family decided to move to Eretz Yisrael and resided in Tzifat. In Eretz Yisrael Rav Yosef had the honor of meeting the world-renowned Chida (Rav Chaim Yosef David Azulai). The Chida approached Rav Yosef and informed him about the terrible hunger that befell Eretz Yisrael and how Rav Yosef was the perfect candidate to go around to the neighboring countries to collect funds. Adhering to the words of the Holy Sage, Rav Yosef didn’t hesitate; he packed his bags and along with his brother and sister began his sacred voyage to Bagdad, Iraq. In Bagdad, the Mammons were introduced to the illustrious Sasson family, who guided Rav Yosef to travel to Bombay, India. In Bombay, Rachel got engaged to a member of the Sasson family. The newlyweds resided in Bombay, where Rachel’s husband led a successful textile business, which he named after his wife “Rachel-Banu.”

From there, the two brothers, Rav Yosef and Rav Shlomo, left for Istanbul. Rav Shlomo stayed behind and Rav Yosef left for Iran. Rav Yosef first came to Carminsha, then Hamadan, then Teheran, and finally Mashhad. The two brothers had to move fast due to Israel’s dire need for food and sustenance. The Jews of Mashad lived a very tranquil and peaceful life. They were able to practice their religion fully focused with joy. The Chacham of Mashad at the time was Chacham Simantov (author of Chiyat Alruach). Rav Simantov was an outstanding talmid chacham in an outstanding era of Torah. Rav Simantov assisted Rav Mammon tremendously with collecting funds for Eretz Yisrael. At the end of this successful voyage, Rav Mammon asked Rav Simantov if there were any other Jews in the vicinity, to which Rav Simantov replied, “There is a community about 2000 kilometers from here located in the city of Bukhara.” Rav Simantov continued that the Jews of Bukhara have been living there for many years. Recently, they requested sifarim from and a helping hand. He sent over a rabbi from Yazid named Rav Ziveed, along with many sifarim. Rav Simantov related he just got word from Rav Ziveed that he is having a very difficult time in Bukhara and feels that he has no influence on the Jews. He didn’t know how to respond.

Upon hearing such opportune words Rav Mammon responded confidently, “I will go.” Rav Simantov was impressed but reluctant. He told Rav Mammon that the roads were extremely dangerous, in addition to the fact that Rav Mammon spoke no Persian dialect.

But Rav Mammon was stubborn and insisted on proceeding with this heavenly call. When Rav Simantov realized that he could not dissuade the holy messenger from Israel, he felt that he was forced to help the Chacham in this voyage in every way that he could.

Rav Simantov appointed one of his students, Chacham Daniel, to join Rav Mammon, specifically as his interpreter. With a caravan full of sifarim, the two chachamim were now on their way to Bukhara.

For the first time in hundreds of years, a rabbinical messenger arrived in the city of Bukhara. During the summer of 1793, Chacham Mammon and R’Daniel entered the gates of the city Erev Shabbat Kodesh.

Now, it must be noted that the Bukharian Jews are a community of many cities like Samarkand, Tashkent, Karmena (Navayee), Khitirchee, Shaharesabz, Tukeystan, Andijon, Ponjshombe, Dushombe, Kokand, and many more. However, as explained in prior articles, for about 150 years prior to Rav Mammon’s arrival, the Jews of Bukhara were experiencing an era of spiritual turmoil. Being that it was a very desired location that the local gentiles constantly fought over, understandably, it led to devastating persecutions for the Jews.

Upon entering the city, the Chacham couldn’t help to notice the slaughterhouse. Observing the shechita procedure, Rav Mammon was very disturbed about the lack of correct ritual. Right then and there he realized that a great task lied ahead of him.

Rav Mammon immediately requested to be taken to the Bait Hakineset to speak with Rav Zivid.

Word spread like a wildfire through the streets of the city that two strange Jews had come to town and seemed very motivated. The words reached the ears of Bucharas Nasi (political leader), whom the Bukharians called “Kalantar.” At the time, there were two aristocratic Jews who held these positions: Mullo Yosef Chasid and Mullo Hamalidin. Word got to Mullo Hamalidin first about the visitors. Upon entering the Bait Hakineset, Mullo Hamalidin was delighted to know that Rav Mammon was sent from Mashad by Rav Simantov. After the leaders of the community convened, Mullo Hamalidin set up the two chachamim in the house of Mullo Yaakov Jewsa, a very wealthy and respected individual. Much honor and respect was portrayed upon the rabbanim as a token of the community’s appreciation.

After witnessing the town’s shochet performing an incorrect shechita, Rav Mammon decided not to eat any meat or poultry for the time being and sustained himself mainly through fruits and vegetables. Rav Mammon experienced a rather interesting Shabbat that week. Rav Mammon realized more and more that the community yearned so sincerely to be guided in the correct path. When given the opportunity to speak (while Rav Daniel would translate), Rav Mammon stepped up to the podium explaining his original objective: that he was sent by the Holy Chida to collect funds for Eretz Yisrael. Then Rav Mammon broke out into tears and went on explaining and teaching some basic halachot about shechita, Shabbat, and tivilah. (This first speech was recorded by a descendent of Rav Mammon about 100 years later, Rav Pinchas Chacham, son of Rav Shimon Chacham, in his book Zecher Tzadik). After such an inspirational speech, Mullo Hamalidin stood by the Taiva and announced to the people that Hashem had send Chacham Yosef Mammon to our community like “Eliyahu Hanavi at the time of trouble.” He then looked at Rav Mammon and said with open arms, “We will listen to whatever you tell us. Please stay with us; your word will be kadosh for us.” At that moment, everyone in the Bait Kineset stood up and declared in unison, “naaseh vinishma” (we will do and we will listen).

That Motzai Shabbat, all the leaders of the community joined for a meeting at the house of Mullo Yaakov Jewsa and officially inaugurated Rav Yosef Mammon as the new ultimate authority of Bukhara.

The information in this article is from Toldot Yihudai Buchara, by Nissim Tajir.