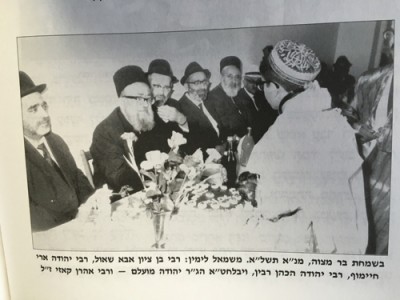 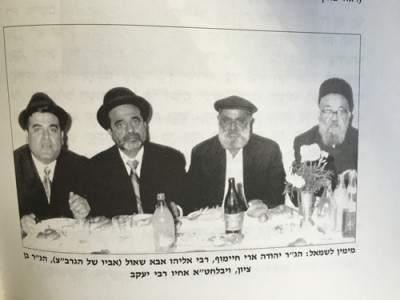 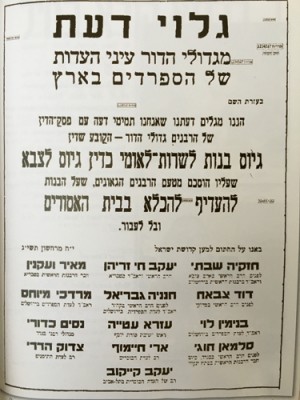 In the last one hundred years, many famous Torah sages have walked the face of this earth. Hashem, in his mysterious ways, has only revealed a small percentage of them to the general public. We have all heard of Rav Ezra Atia, the Stiepler, and the Baba Sali. People often wonder, “Does that mean if a community did not produce famous chachamim (Torah scholars) then they didn’t exist?”

When I was a bachur (student) in Yeshiva, that thought often entered my mind, until a talmid chacham in the kollel (R’ Yonatan Admoni) shared an interesting thought with me. He asked me, “Did you ever hear of Rav Yosef Karo?” to which I replied, “of course; he wrote the famous Shulchan Aruch.” He then asked me “Did you ever hear of Rav Shmuel Valansee?” to which my response was, “no.” He then opened up a Shulchan Aruch and showed how Rav Yosef Karo referred to Rav Shmuel Valansee as one of the greatest Torah sages of his generation. He then stated if no one hears a tree fall in the forest does that mean it didn’t fall? With those words I was sold! Thus embarked upon this hobby of researching Bukharian Torah scholars.

Following the Russian revolution (1917) and the poverty that struck Israel in the ‘20s and ‘30s, it is understandable why the very previous generation did not have so many Bukharian Torah giants. Even the Bukharians who were spared of communist Russia and ascended to Israel in the 1890s fell prey to the misleading anti-Torah leaders of the time. Nevertheless, despite all of those obstacles, there emerged a Gadol Hador (Torah giant) in his own right - a scholar who stood shoulder-to-shoulder with all other leading poskim of the recent generation. His name was Rav Yehuda Ari Chaimov; he was a leading rav of the Bukharian community of Yerushalayim in the 1960s.

Rav Yehuda, or Mulla Ari, as he was commonly referred, was born on the 18th of Iyar 1899 in the city of Andijan. His parents, R’ David and Esther, merited to have eight children. In 1909, young Yehuda, his parents, and two sisters, Rachel and Devorah, made the ultimate decision to travel to Eretz Yisrael along with a caravan of relatives. After about two years of living in Yerushalayim, the family decided to return to Andijon along with little Yehuda. In 1912, however, they decided to return to Yerushalayim - this time for good. Rav Yehuda’s older married siblings (two brothers and three sisters) stayed behind in Andijon with their respective families.

It is truly amazing how Hashem orchestrates his world. Rav Yosef Yedid Halaivi arrived in Tzafat from Syria in 1890 and lived there for 21 years. He was arguably one of the greatest poskim in Eretz Yisrael. In 1912 he made a trip to Yerushalayim to print a certain book that he authored. Rav Yosef decided to reside in Yerushalayim and transferred over all his belongings. A short while later he was appointed as a prominent dayan (Rabbinical judge) for the Bukharian community. His new appointment gained him many connections, one of which was inheriting the enormous library of the Rishon Lizion, Chacham Rephael Meir Panitzil. He also served as dayan in the Syrian Beit Din. Rav Yosef taught a group of students for s’micha (Rabbinica ordination), many of who were Bukharian. The two most prominent were Mulla Ari and Rav Simcha Haimoff. Most probably those were the first two Bukharians to get s’micha in Eretz Yisrael. At the time the Mulla Ari was learning s’micha by his rebbe, the situation in Yerushalayim was very bad. It was in the middle of WWI and poverty had struck hard. There were literally dead bodies in the streets. Mulla Ari, together with his havruta, Mulla Simcha, were not deterred and used the opportunity to become ordained by their rebbe. In 1922, the renowned Yeshivat Porat Yosef opened. Mulla Ari was immediately accepted and even served as a maggid shiur (teacher for the older students) during the 1920s. Rav Yosef Yedid makes mention of Mulla Ari and Mulla Simcha in the sefarim that he put out - Birkat Yosef in 1927 and Vaychi Yosef in 1929. He refers to them with great endearment and gratitude.

In 1937, a “vaad” (committee) was set up, consisting of the Bukharian spiritual leaders of Yerushalayim. They were Rav Avraham Aminov, Rav Chizkiyahu Rabin, Rav Moshe Hakohen Yitschakov, Rav Chaim Shalomov, and, the youngest of all the members, Mulla Yehuda Ari Chaimov. In 1943, when some of the chachamim had passed away, Rav Moshe Yitschakov was appointed as rabbi of the community. When he passed away, upon Rav Moshe’s request before he passed, Mulla Ari was given the honor to fill in the position. Due to his humility, he rejected on the offer, and passed it on to his dear friend, Rav Chizkiyahu Rabin. Mulla Ari felt that it was the right thing to do since Rav Chizkiyahu was much older than him.

In 1945, when Rav Chizkiyahu passed away, Mulla Ari was proclaimed the rav of Yerushalayim’s Bukharian community, a position he held for 28 years. Mulla Ari tried assisting the Yeshiva in every way possible, keeping the atmosphere strong despite of the hardships Israel was going through at the time. His classes were of great guidance and inspiration to many future leaders of Eretz Yisrael, such as Rav Mordachai Eliyahu, Chief Rabbi of Israel during the 1980s, and Rav Yehuda Tzadka, Rosh Yeshiva of Porat Yosef. Mulla Ari had an especially close relationship and influence on Chacham Ben Zion Abba Shaul, Rosh Yeshivat Porat Yosef and leader of the Sepharadi Yeshiva world of Israel until his passing in 1996. Mulla Ari was also a member of the Bet Din Tzedek of the Eida Hacharaidit Hasepharadit.

After Mulla Ari’s passing on 20th of Tevet 1973, his house hosted the Yeshiva Ruach Yaakov. Years later, a Beit Keneset was constructed in his name, “Gur Aryeh Yehuda,” in B’nei Brak (Rechov Rebbi Akiva 37). Mulla Ari is a very unusual inspiration for all Jews, especially Bukharian yeshiva boys of our generation. To properly internalize Mulla Ari’s accomplishments on a worldly basis, it would be like saying that a Bukharian was the mayor of New York 50 years ago and did an amazing job in improving all aspects of the city. We should take this opportunity of pride of our gedolim, and emulate them so that we can achieve such spiritual heights with great zest as did Mulla Yehuda Ari Chaimov, Yehi Zichro Baruch.

Rabbi Yisrael Kaikov is ordained by the Mirrer Yeshiva where he learned for ten years, he is a experienced Rebbi, specialist in Jewish history and together with his wife they are madrich Chatanim and kalot Currently he is the Sgan menahel and 8th grade Rebbi in Yeshivat Shaarei Zion. He is also the meyased of Kehilat “MEKOR BARUCH” on Coney Island and ave J.