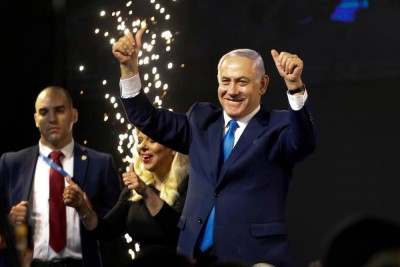 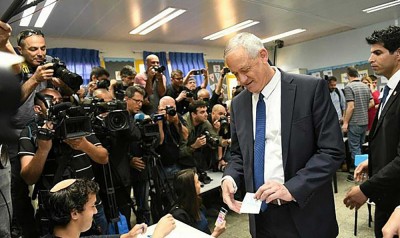 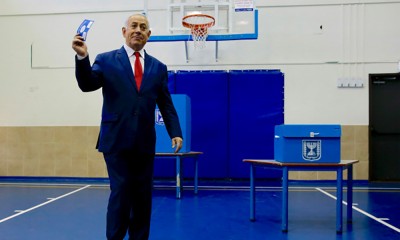 In his toughest re-election race, exit polls showed Israeli Prime Minister Benjamin Netanyahu a couple of percentage points behind centrist rival Benny Gantz, but by the end of the evening on Tuesday, early counting returns projected the incumbent ahead. “The right-wing bloc led by Likud clearly won,” Netanyahu said to his supporters. “I thank Israeli citizens for their trust. I will begin forming a right-wing government with our natural partners already tonight.”

In the hours following the end of voting, the Likud and the opposing Blue and White Bloc both claimed victory, with the projected number of Knesset seats ranging between 33 and 36 for either party. “We won! The Israeli public has had their say! Thank you to the thousands of activists and over a million voters. These elections have a clear winner and a clear loser,” said Gantz and fellow block leader Yair Lapid. “Netanyahu promised 40 seats and lost. The president can see the picture and should call on the winner to form the next government. There is no other option!” Lapid is a former television host whose Yesh Atid party rose to popularity on the promise of a more secular state, which includes ending the army draft exemption for chareidim. Gantz is a former army chief of staff. Like three other former generals who served as prime minister, he supports the two-state solution to end the ongoing conflict with Palestinian Arabs.

Since the founding of Israel in 1948, no party had won outright majority in the Knesset with 61 seats, forcing the largest parties to form governing coalitions with smaller parties that represent the country’s ethnic minorities, religious interests, and single-issue platforms. In the weeks preceding the April 8 vote, United Torah Judaism, the party representing the voices of chareidi rabbinic leaders, promised to support Likud as a coalition partner. Shas, the religious Sephardic party, is also expected to stand by Likud as it has since 2009.

Among parties formed ahead of this election, the New Right party, led by Education Minister Naftali Bennett and Justice Minister Ayelet Shaked, failed to pass the 3.25 vote percentage threshold to earn Knesset seats, and neither did the Zehut party led by former Likud lawmaker Moshe Feiglin. Yisrael Beiteinu, led by former Defense Minister Avigdor Liberman, is expected to hold between four and six seats.

The run-up to the election included a hard-right pivot by Netanyahu, who feared losing nationalist votes to more hard-line parties. By promising to extend Israeli civil law to Jewish communities in Judea and Samaria, he earned the scorn of international observers and praise from many in the settler movement. At the same time, he still faces accusations of corruption and on interfering with voting when Likud supporters were found with hidden cameras at poll sites in the country’s Arab communities.

As with his last re-election, Netanyahu stoked the fears of nationalist voters by invoking the Arab vote. This year, their turnout was low, as many activists urged boycotting the Israeli election. Instead of running on the Joint List, Israel’s Arab-oriented parties ran on two prominent lines: Raam-Balad and Hadash-Taal, with a combined 10 to 12 seats expected for these parties. Despite this relatively high number of seats, Gantz is not expected to call on them to serve as a coalition partner.

As we went to press, the results were being counted. The party with the largest number of seats or declared coalition partners will be called on by President Reuven Rivlin to form the next government. Should Netanyahu succeed in the plurality of Knesset seats and coalition partners, he would surpass founding Prime Minister David Ben-Gurion’s record as Israel’s longest-serving head of government.