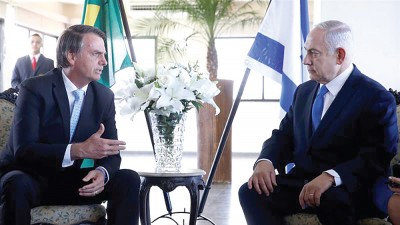 With the next Israeli Knesset elections scheduled for Tuesday, April 9, incumbent Prime Minister Benjamin Netanyahu is touting his recent diplomatic overtures in his bid to become the country’s longest serving leader. “We are happy to be able to start a new era between Israel and a great power called Brazil,” he said ahead of his meeting with the country’s recently-elected President Jair Bolsonaro.

Described by opponents as the Brazilian Trump, Bolsonaro has a long record of making incendiary speeches peppered with personal attacks, praising the country’s Cold War-period military rule, along with promises to ease gun ownership restrictions, roll back environmental protection laws, and deal with native (indigenous) land claims. In a country plagued by urban crime and political corruption, many voters see Bolsonaro as a straight-talking outsider who puts the country’s interests first.

Bolsonaro’s ascendancy also signals a reversal in Brazil’s Middle East policy. In contrast to his predecessors Lula da Silva and Dilma Rousseff who recognized Palestine as a country and rejected Dani Dayan as the ambassador to Brazil on account of his past role as a settler leader, Bolsonaro vowed to relocate Brazil’s embassy to Jerusalem.

As part of Netanyahu’s five-day visit to Brazil, both leaders were greeted with cheers at the Kehilat Yaacov Synagogue in Rio de Janeiro. “It is with great honor that today I have the man that is to me an example of patriotism, austerity, and work for his people,” Bolsonaro said. “I have always mentioned Israel as an example. Look what they don’t have and see what they are. Look at Brazil, look what we have, and see what we don’t have. We’ll be more than just good partners, we’ll be brothers.”

Riding on the wave of nationalist populism, Netanyahu also had recent meetings with Hungarian Prime Minister Viktor Orban and Italian Deputy Prime Minister Matteo Salvini, both of whom are challenging the official European Union positions on Jerusalem. As with Trump and Bolsonaro, these leaders also oppose large-scale immigration to their countries and made statements seen as racist towards minorities. Netanyahu also counts India’s Narendra Modi and Rodrigo Duterte of the Philippines as recent visitors to Israel.

From a historical viewpoint, Israel’s friendship with authoritarian leaders appears as a danger to Jewish security, after a century of fascism, communism, and Arab nationalism that resulted in massive Jewish deaths and expulsions. But the difference is that the nationalist leaders of this generation were brought to power through democratic elections and have expressed as much support for Jewish communities within their countries as for Israel.

In a time when western democracies such as Belgium, France, and Great Britain appear either unwilling to restrain anti-Semites within their borders, or are prevented from doing so on the grounds of free speech, one could look to Russia for the opposite policy, where President Vladimir Putin cracked down on the neo-Nazis, contributed state funds to a Jewish museum, restored former synagogues to the Jewish community, and attended Chanukah celebrations.

The support of authoritarian nationalists for Israel has limits. As Putin initially allowed Israel to target Hezbollah bases in Syria, he also rebuked Israel when the targets were too close to his ally, Bashar al-Assad.

Looking further back into Jewish history, some of the autocrats who sheltered Jews in ghettos from torch-wielding mobs and the pressure to convert also changed their minds when it was politically expedient for them. No one knows how long Bolsonaro, Duterte, or Trump will remain in power. As with its wars in the past, Israel has limited time available to defend itself before international pressure (including its allies) forces its army to stop advancing further. In 1967, the crossing of the Suez Canal brought pressure from the West to end the war, and likewise in 1973 when the army was within 25 miles of Damascus.

For now, Israel has the ability to expand its Jewish communities in the territories, shoot back against Hamas in Gaza, and shut the Hezbollah tunnels on the Lebanese border, and it must do as much as it can before new “pharaohs” arise who “do not know Joseph.”