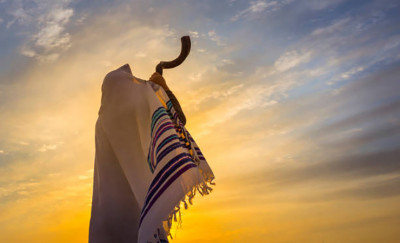 The birth of a new year is a time of reflection and resolution, when hope and inspiration fill the air. We dream about what this upcoming year holds in store for us, how we can make the rest of our life the best of our life. We all have ideas, ambitions, and aspirations that we yearn to bring to fruition, and the new year gives us "permission" to revisit these goals and breathe new life into them. For a brief moment, everything is crystal clear, we see our purpose and our path with vivid clarity. However, there is an underlying frustration that accompanies this time period as well. If we reflect honestly, we often realize that our new year's resolutions are awfully similar to those of last year, and the year before, and the year before…

We have brief moments of inspiration, but they soon fade into oblivion, only to be resuscitated for a few more days the next year in the hopes that somehow this year might be different. However, there is another option, a way to actually make this year different. By truly understanding this time of year and fully tapping into powerful themes, we can we can turn what was previously fleeting inspiration into lasting, eternal change.

The Deeper Themes of Teshuva

Teshuva literally means "return"- but whom, or perhaps what, are we returning to? The Gemara explains that Hashem created teshuva before creating the world itself. What is the meaning of this enigmatic statement, and what lessons and implications does it have for us as we proceed through the teshuva process?

The Practical Form of Teshuva

The Rambam discusses the three-step process of teshuva:

First, one must reflect on their past and acknowledge that a problem exists.

One must then transition into the present and strongly feel the pain of their mistake, regretting it wholeheartedly.

Finally, one must look towards the future and resolve to never commit this same mistake again.

This three-step guide is the practical process of teshuva. However, the essence of teshuva is the deep foundation for these three steps, and understanding this essence is the key to truly transforming ourselves through these three steps.

True Teshuva: Returning to Your Higher Self

Genuine teshuva is not just about self-transformation, it's about self-expression, returning to your true and higher self. As the Gemara (Niddah 30b) states, while we were in the womb we were in a perfect and transcendent state of being, and a malach (angel) teaches us kol ha'Torah kulah (all of Torah). As the Vilna Gaon explains, this refers to the deepest realms of Torah, a transcendent Torah that lies far beyond this world, beyond the confines of space and time. This Torah is the very root of reality, and you were granted complete understanding of its every detail. Not only were you shown this level of Torah, but you also learned your specific share of Torah- you were shown your unique purpose in the world, and how your unique role fits into the larger scheme of the human story as a whole. You were given a taste of your own perfection, of what you could, should, and hopefully will become. And from this transcendent realm, you were birthed into the physical world with the mission to actualize everything you were shown in the womb, while in your perfect, primordial state.

In essence, your job in this world is not to create yourself, but rather to recreate yourself; to re-attain your original state of perfection, as you were shown by the malach. This time, however, it must be done through free will, by choosing to become great. Only by overcoming challenge and difficulty, only by asserting your willpower, can you fulfill your true potential. In essence, our entire life is a story of teshuva- returning to our original, higher, and true self.

The shofar is a wake-up blast, meant to shake us from our stupor and return us to our true self. When we hear the shofar's piercing cry, we yearn to return to our source, to our higher selves. The word "shofar" shares a root with "li'shaper", to perfect and beautify. Strikingly, it also shares a root with "mei shafir", the amniotic fluid which surrounds the fetus while in the womb. When we blow the shofar, we are reminded to improve and perfect ourselves, to return to our fetal state of perfection we once knew, to return to our true selves.

The Three Stages of Teshuva

There are three stages of genuine teshuva:

The first is individual teshuva, whereby we return to our higher selves, our fetal selves, our true selves.

The second stage of teshuva goes beyond the limited self, turning the focus from individual to community.

The Rambam, in discussing the laws of teshuva, states that someone who removes himself from the Jewish community has no share in Olam Habbah (the World to Come). In other words, even if this person keeps all of Torah and mitzvos and is an upstanding Jew, if he disconnects himself from the community, he loses his eternal existence. This requires explanation. After all, this person didn't commit a heinous or evil act, he merely chose a life of isolation. Why should this warrant such extreme punishment?

The answer is profound. As human beings, we begin our lives as completely self-centered creatures, perceiving ourselves as isolated, separate, and disconnected from everyone else. As we progress through life, we learn to break down those walls and psychological barriers, recognizing that we are part of a bigger self, a collective self, a higher consciousness. At root, all of Klal Yisrael is one, an interconnected self. Each of our individual neshamot are part of a bigger whole, like individual cells that make up a single human body. A central aspect of the experience of Olam Habah is experiencing yourself as part of Klal Yisrael, as part of your true, collective reality. If, however, one disconnects themselves from Klal Yisrael, they have uprooted themselves from reality itself, and simply cannot exist. Just as if you unplug a light bulb from its electric circuit, the light extinguishes, if a soul is disconnected from its root, it ceases to exist. This is not a punishment, merely a consequence.

This is the second stage of teshuva, returning to our collective self, to the single soul of Klal Yisrael.

The Third Stage of Teshuva

The third stage of teshuva is returning to our absolute root and source, to the Source of all sources, to Hashem Himself. The Nefesh HaChaim refers to Hashem as the "Neshama Shel Neshamot", the Soul of all souls. Hashem is the root of existence, the absolute root of all our souls. Our entire journey through life is about sourcing our existence back to Hashem - this is the ultimate teshuva.

We can now explain the Gemara which states that teshuva preceded creation. This not merely a chronological phenomenon, this is a fundamental principle: teshuva is the root of this world, all of existence is created with the purpose of returning to its source, to fully reflect its absolute root, Hashem Himself.

The Three Themes of the Rosh Hashana Tefilah

The three themes of the Rosh Hashana davening are Shofros, Zichronos, and Malchuyos. Shofros relates to the blowing of the shofar, zichronos relates to remembering seminal events from Jewish history and Hashem’s covenant with the Jewish People, and Malchuyos is the process by which we crown Hashem King

The shofar represents one's individual spiritual yearning. It is a haunting, wordless cry that returns us to our higher self, our fetal self. Zichronos refers to the concept of memory, building upon this same theme. Memory represents tracing something from the present back into the past. It is an exercise in sourcing something back to its root. On Rosh Hashana, as we discuss the Akeidah and other seminal moments in Jewish history, we connect back to our collective self, the root soul of all of Klal Yisrael. Malchuyos is where we crown Hashem as our Melech, our King. We declare Hashem to be the source of everything, our ultimate root.

Rabbi Shmuel Reichman is the bestselling author of “The Journey to Your Ultimate Self,” which serves as an inspiring gateway into deeper Jewish thought. As an educator and keynote speaker, he has lectured internationally on topics of Torah thought, psychology, and leadership. He is also the founder and CEO of Self-Mastery Academy. After obtaining his BA from Yeshiva University, he received Semicha from RIETS, a master’s degree in education from Azrieli, and a master’s degree in Jewish Thought from Bernard Revel. He then spent a year studying at Harvard as an Ivy Plus Scholar. He currently lives in Chicago with his wife and son where he is pursuing a PhD at the University of Chicago. To invite Rabbi Reichman to speak in your community or to enjoy more of his deep and inspiring content, visit his website: ShmuelReichman.com