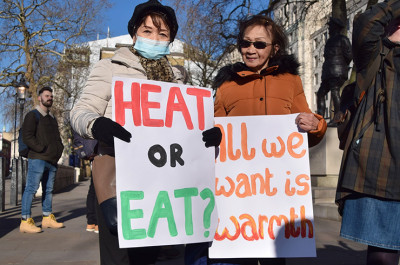 The year between last Rosh HaShanah and this past one will likely be remembered as a difficult one, with rising global tensions, division at home and painful losses in markets. Among the prayers millions of people will have in mind this year is that Hashem bless the world and resolve these challenges very quickly.  All of us are desperately in need of these blessings.

Politically, Americans are sharply divided.  The problem is not just that there’s a wide gap between Republicans and Democrats, but that the two groups have come to detest each other.  And these days, hate extends way beyond politics.  The numbers of anti-Semitic incidents keep rising, and along with that, hate crimes against other minority groups too, particularly Asian Americans.

The past year has also brought an increase in the number of violent crimes.  Worse, too often there is no mercy shown to victims.  Our rabbis have taught us that in the era right before the arrival of Moshiach there would be no respect for elders and no grace shown to children; we are watching the truth of their words unfold in real time.

In the last year, the quality of life continued to decline in most big cities.  Looters continue to steal hundreds of dollars worth of merchandise from retailers without any fear of punishment. Ordinary people worry about riding the subways, and many people feel unsafe when walking the streets even during daytime and even in so called “safe” neighborhoods.  Multiplying these scenarios countless times each day across the country will give a better idea of what’s really going on out there.

Late in 2021, Russian President Vladimir Putin hinted cryptically about the possibility of an upcoming black swan event. He wasn’t specific, but indicated it would be unexpected and be of such a magnitude that it would send stock markets reeling and have additional consequences too.  In late February, the world learned exactly what Putin had in mind when Russia invaded Ukraine.

The thinking initially was that the war would be very brief and end with a huge Russian victory – but events did not unfold that way.  More than seven months later, the fighting is still raging and, at least for the moment, Ukraine clearly has the upper hand.

A major counter-offensive resulted in Ukraine recapturing hugs swaths of land lost earlier in the conflict, and a Russian retreat of massive proportions.  Russian losses were so high and so humiliating that some political observers wondered aloud whether Putin would feel compelled to retaliate with extreme measures – if for nothing else than just to save face; press reports speculate those measures could include nuclear weapons.

Meanwhile, flash points in other regions of the world also are heating up and getting closer to becoming “hot” wars.  China vs. Taiwan is only one example of this. Vice Admiral Karl Thomas, commander of the US Seventh Fleet, suggested that a naval blockade of Taiwan by China is possible and that China is totally capable of implementing one.  And a US intelligence chief said China is preparing to invade Taiwan.  Wrangling between North and South Korea is intensifying even as the North continues developing more lethal weapons and making horrible threats.

And war between Iran and Israel could easily break out and become a regional conflict; this conflict also would have potential to draw in the superpowers.  Even a limited war would disrupt shipments of oil and gas, interfere with manufacturing, and drive utility and food bills much higher.

Up Ahead: Phase II

So where does all of this leave the world – and the ordinary people who simply want a peaceful life? Unfortunately, in a very precarious situation, because life as we know it could change very suddenly and very drastically.

The world appears to be entering into the difficult phase analysts have been warning about.  In Europe, people can no longer feel confident about finding the food they need at the local supermarket, or be sure they can afford it, or even about getting electricity when they flip the switch.  These problems could easily enough spread to America.

Optimists who still believe the world is getting back to “normal” should read the blunt speech French President Emmanuel Macron delivered in late August.  Macron warned that France had “reached a tipping point” and that the months ahead would be tough “as the world faces a possible end of abundance.”

Although he didn’t specify exactly what that means, clearly France must deal with very pressing issues, England is in even worse shape and Germany in worse shape than England. Inflation is racing ahead and many people are already far behind on their utility bills – and that’s before the full impact of slowing economies has been felt and before winter has set in.

While people are seeking tangible solutions to their immediate problems, it’s likely they also will be reflected on their lifestyles, whether by choice or forced to by circumstances.  Some may look at what’s going on in the world and opt to replace lavish habits with more modest ones.  Most of us may have to learn how to be happy with less materialism.

There’s also a chance that society as a whole will become more introspective.  They will think back fondly to the good old days, when worrying about war, plagues, and famine were well beyond their day-to-day worries, and decide the current system isn’t working.  At that point, they may decide they gained nothing by abandoning religion and will turn back to faith.

That would truly be amazing, because in recent, years traditional values have been trashed and replaced by sacrilegious ideas once unimaginable; even more astonishing is that those are being pushed in elementary schools.

The belief that society would return to religion may sound completely improbable, but don’t rule it out. Stranger things have happened.