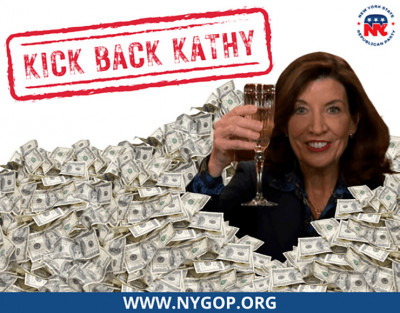 Kathy Hochul is gaining confidence as her campaign to be elected to a full gubernatorial term marches forward. With less than two months to go, Hochul is leading challenger Lee Zeldin by 5-15 points, depending on the poll. Hochul may think this gives her a mandate to act as tyrannical or corrupt as she pleases, but her hubris should be her undoing.

Hochul wants private corporations to be her political henchman. She doesn’t hide this desire, openly tweeted about how credit card companies should target her political enemies: legal gun owners. “Everyone needs to do their part to combat gun violence,” she wrote. “[AmericanExpress], [Mastercard] & [Visa] should categorize firearm purchases & flag suspicious activity – just like they do for millions of other transactions. Together we can help stop gun trafficking & keep New Yorkers safe.” Hochul is expressly demanding that a private company do her bidding.

First, why is this so dangerous? Why shouldn’t gun sales be categorized the same as any other sales? The simple reason is the same as to why the Second Amendment is so important. The entire purpose is to prevent a tyrannical government from taking too much control over the people. Not hunting, like Democrats like to say, but because it is “necessary to the security of a free state,” as the amendment clearly says. If credit card companies can flag these transactions, they can easily provide that data to the government, thus creating a registry of who has what guns and where.

While Joe Biden claims that anyone who wants to defend themselves against the U.S. government would need an F-15, that is clearly false. He himself gave a country to a bunch of cave-dwellers with Soviet era rifles. Activists like Ammon Bundy held off the might of the U.S. government in 2014. And, according to Democrats, unarmed MAGA warriors almost overthrew the entire government on January 6. Then there’s the post-COVID reality. Australia banned guns, and the first moment they deemed it an “emergency,” they locked down their entire citizenry with severe consequences. Same is true for China, which has severe gun control and a bevy of human rights violations.

Then there’s the other issue with Hochul’s demand: the acquiescence of the credit card companies. Visa, Mastercard, and American Express all said they would start classifying gun sales. The International Organization for Standardization (ISO) made the designation, and these companies were quick to adopt it. An organization that no one heard of, based in Geneva, Switzerland, with the backing of your credit card and elected officials like Kathy Hochul, just severely attacked the rights of a hundred million Americans.

But wait, there’s more! Kathy Hochul used the power of her office to give taxpayer money to her own campaign donors. COVID tests purchased from Digital Gadgets by the Hochul administration were twice as expensive as they should have been. The Times Union reported that “The price offered by Digital Gadgets founder and CEO Charlie Tebele was $13 per test, far steeper than what other companies were proposing for similar rapid antigen tests. Hochul’s administration had just approved a deal with another firm to buy 5 million tests for just $5 each. Still, the Hochul administration quickly agreed to pay $338 million to Digital Gadgets at the higher per-test price. The state Division of Budget and Hochul’s office signed off on the deal on Dec. 20, the same day Tebele made the proposition.” Tebele, according to the Times Union, donated at least $300,000 to the Hochul campaign, and he personally held a fundraiser for her in April.

Hochul had the authority to do this because she kept extending her emergency powers, month after month. Far after the waning of the Omicron surge, Hochul signed an executive order saying that she could keep her own powers granted by the state legislature for another 30 days. Now that she got her kickback, she finally allowed the emergency powers to expire.

Then there’s the issue of Hochul’s refusal to debate Lee Zeldin. Zeldin’s team has been trying to schedule a debate with the Governor for months, to no avail. Zeldin is forced to tweet daily just to call out to Hochul. “It’s September 13 and [KathyHochul] still has not accepted ANY debate requests,” Zeldin tweeted Tuesday morning. “This is not ok. The contempt Hochul has for being challenged should alone disqualify her. Absentee ballots start going out in 10 days. These debates need to start now before voting begins.” Hochul's refusal to face her opponent on a debate stage undermines the democratic process.

Kathy Hochul has shown her willingness to use her office for political and personal gain. She bullies major corporations to do her bidding. She wastes taxpayer money to bribe political allies to kickback money to her campaign. She refuses to allow the voter to be informed on the differences between her and her opponent. All while presiding over the decline of the state of New York. Crime is up, the economy is in shambles, and she is failing at every turn. There is no telling what another four years will bring.