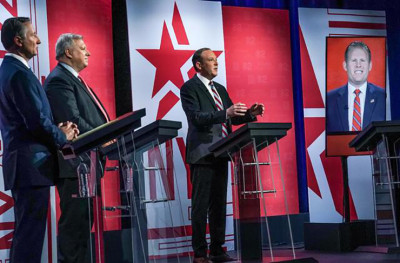 Republican candidates for Governor of New York squared off on Monday night, making their cases to win the primary vote to be held on June 28th.  Congressman Lee Zeldin, former Westchester Executive Rob Astorino, Businessman Harry Wilson and Andrew Giuliani had many differences over the evening, but one message was clear.  New York can no longer afford to be a one-Party state.

For anyone watching who thought that there were two debates going on, in a way there was.  Giuliani was barred from the debate stage for not showing proof of vaccination against Covid, so he was in a separate room from the other candidates.  So for much of the debate, Zeldin actively went after Wilson and Astorino, and vice versa, while Giuliani went largely unscathed.

The fireworks occurred early and often, with Zeldin calling Wilson a “Never Trumper” and Astorino “Rolex Rob.”  Wilson fired back, calling Zeldin a child and claiming that Zeldin asked Wilson to run on his ticket–a claim that Zeldin vigorously denied.

All the candidates were attempting to mold their vision of the future of New York and how they would achieve it.  Astorino leaned heavily on his experience as County Executive of Westchester, claiming that he lowered deficits in the County during his tenure.  Wilson pushed his business experience, referring to himself as a “turnaround specialist.”  Zeldin’s experience in both Albany and Washington was, at times, used as a weapon against him by Wilson and Astorino, yet he felt no need to flaunt his resume.  Zeldin, who has the backing of the New York GOP, seemed eager to show off his ability to be tough on the debate stage, knowing that Republicans in the post-Trump era look for a more aggressive candidate.  Giulliani, to his credit, didn’t directly say he would govern like his father, but he certainly echoed the policies that made Mayor Giulliani so popular in the 90s, like broken windows policing.

The moderators seemed determined to frame the debate from the beginning around national issues, rather than local ones.  The first question of the evening from the CBS moderators was not about inflation, gas prices, or skyrocketing crime in the state, but rather about January 6th and if Trump would run again.  The candidates gamely answered, all saying they would support Trump if he were the nominee.

In fact, the candidates had far more similarities, policy-wise, than differences, despite the on-stage showdowns.  They all claim that the current abortion law in New York goes way too far, yet only Wilson said he wouldn’t try to get it changed, claiming he’s not running on “social issues.”  They all think Manhattan District Attorney Alvin Bragg should be fired, and they supported adding the ability to recall DA’s to the state constitution.  They are all pro-fracking and drilling for natural gas to help with energy costs.  They are all against congestion pricing.

The debate highlighted two important characteristics that are going to be needed from the Gubernatorial candidate for the General Election.  The first is a strong understanding of the issues plaguing this state and this nation and a conservative solutions to those issues.  The second is the strength to take the fight to the Democrats, who heavily outnumber Republicans in registered voters.  The clear winner in both of those categories was Lee Zeldin.

Zeldin went after Harry Wilson from his first statement on the debate stage, and Wilson was on the defensive for the rest of the evening.  While that sort of tactic may turn off more genteel voters, it resonates with many Republicans who no longer care about civility in the face of Leftist lunacy.  Zeldin displayed a force of will that many have not seen out of him before, and that’s something that won’t be soon forgotten.

Giulliani, while he performed admirably, was at a severe disadvantage being relegated to the sidelines.  He was ignored by the other candidates, and the only verbal scraps he got into was with the moderators, who seemed to treat him with more disdain than they have for the other three candidates.  Some may see it as him rising above the scrum, but it seemed like he was playing a different game.

Whoever the nominee is, the primary is just a small hurdle compared to what is coming after.  New York is deep blue, and there will be a severe uphill battle to win the Statehouse.  The nominee needs to be committed, tough and unrelenting.  They will be going against a strong Party and a strong media.  On their side, however, is the awful track record of the Democrats, both statewide and nationally.  The onus will be on the nominee to make sure that the state knows who to blame for the problems they face.