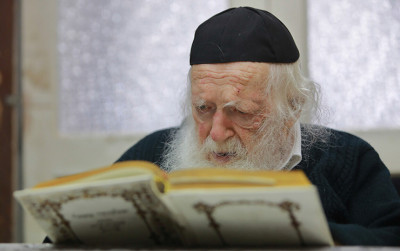 The Gemara in Ketuvot says that when Rebbi died, everyone in the room went to Olam Haba. What is the Gemara talking about? Free Olam Haba? The answer is that everyone there was so connected, and life changed that they went to Olam Haba – and that’s the point of these stories. Rav Chaim’s daily schedule was 11 page Sof Zohar, 10 perakim of tehillim, 8 perakim of Tanach, 10 simanim of Mishna Berura, 8 perakim of Rambam, 10 simanim of Shulchan Aruch, 8 blatt of Talmid Bavli, 8 blatt of Yerushalmi, 8 blatt of Medrash, 8 pages of Kisvei Ha’ari, 8 Daf of Kisvei Ha’Ramchal and then he would write Chidushei Torah! He made a Siyum every year on erev Pesach. He did this with such passion, we should try to do the same. Not exactly the same – but at least turn off your phone for a half hour a day while learning.

Someone came to Rav Chaim and asked if it’s true that the letter ‘gimmel’ and ‘tet’ don’t touch each other? He thought for a few moments and said its true, and he thought of 4 other examples also. We can barely remember letters that touch on one page. Rav Chaim knew the whole Tanach. That’s what the Torah meant to Rav Chaim. Let’s take upon ourselves to have a passion.

Another story, someone in the New York area became wealthy overnight and was nervous of ayin hara so he traveled to Rav Chaim. Rav Chaim asked him if he will go learn in Kollel now?  Get a Chavruta? The man told Rav Chaim they need him in the business. So Rav Chaim whose mind was only Torah asked him, “What is there to be jealous of?”

This is how he saw life.