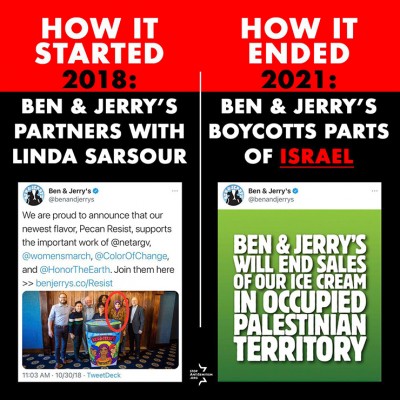 On Monday, Vermont-based ice cream manufacturer Ben & Jerry’s decided to take their leftist ideology to the next level by pulling their products from “Occupied Palestinian Territories.”  This move comes directly from the left-wing playbook on the Palestinian people, which is not about helping them, but rather attempting to hurt the Jews.

“We believe it is inconsistent with our values for Ben & Jerry’s ice cream to be sold in the Occupied Palestinian Territory (OPT),” the company said in a statement.  “We also hear and recognize the concerns shared with us by our fans and trusted partners.” They claim that they plan to stay in Israel, which immediately prompted many Leftists on Twitter to confirm that the BDS movement and their allies consider all of Israel to be “Occupied Palestinian Territory.”

This is not Ben & Jerry’s first foray into politics.  The founders were lifelong socialists who made many public comments about their politics.  This translated directly onto their brand in 2018 when they debuted “Pecan Resist” with notorious antisemite Linda Sarsour.  The Progressive movement was not satisfied, though, and they demanded that the company weigh in on many other matters.

The Ben & Jerry’s twitter account is usually active with a combination of ice-cream-related material and social justice messaging.  They tweet about the prison industrial complex, greenhouse gas emission, and peanut butter toppings.  As the Boston Globe pointed out last week, their account has been quiet for over two months.  This is because in May, they tweeted, “Any mint lovers out there?”, which was a grave sin because Israel and Gaza were exchanging rocket fire.

What does the conflict in Israel have to do with mint-flavored ice cream?  For a normal company, nothing. But Ben & Jerry’s have long since decided that their company is not about sales or profits; it’s about social justice activism.  So much so that left-wing activism has become expected of them.  This why their mint tweet was filled with comments such as, “why do you sell ice cream in israel” and “Hey @benandjerrys, I love your vegan flavors what I don’t love is your continued involvement with Israel in the west bank. cut ties and use your platform to help #FreePalaestine.”  So they stopped tweeting for 61 days, and the first message they posted at the end of that time was that they would stop selling ice cream in Judea and Samaria.

Of course, this wasn’t enough to placate the SJW crowd.  They demanded that Ben & Jerry’s ceases to sell ice cream in what they consider Occupied Palestinian Territory, which is all of Israel.  Ben & Jerry’s did not provide a map to display what “OPT” was, and they claimed that “we will stay in Israel through a different arrangement. We will share an update on this as soon as we’re ready.”

Like all boycotts of Judea and Samaria, this will have no effect on the Israeli population.  Ben & Jerry’s has only hurt the Palestinians with this boycott, as no Palestinian market can now carry their ice cream, while many Jewish supermarkets can, just on the other side of the border.

Jewish-owned supermarkets like Cedar Market, Glatt Express, Aron’s Kissena Farms, Seasons, Gourmet Glatt, and Pomegranate have all confirmed that they will no longer carry the brand.  Morton Williams, which has 15 stores in New York and 1 in Jew Jersey, claims they will reduce stock on Ben & Jerry’s by 70%.

The question is: What should pro-Israel Americans do to respond to this antisemitic action?  The pro-American and Zionist organization Amariah (formerly known as Chovevei Zion, where I am a Fellow), has called for the KOF-K to pull their certification.  The Rabbinical Alliance of America condemned the decision. The Coalition for Jewish Values has begun a petition on change.org that has garnered almost 2,000 signatures in the first day.

The fact is that the pro-Israel community has market power, and that market power can and should be used to let corporations know the consequences of their actions.  The social justice warriors will not stop with Ben & Jerry’s; they will simply move onto the next company, whatever it may be.  They seek to destroy the Jewish State, plain and simple.  Companies frequently kowtow to them because they think that it’s in their best business interest to do so.  It’s up to everyone else to prove that it’s not.