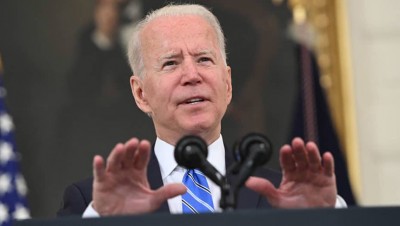 On Monday, President Biden delivered an address about the economy — during which he especially focused on inflation concerns.

American consumers’ expectations for inflation — as officially measured by the Federal Reserve Bank of New York — have reached record highs. The Survey of Consumer Expectations reveals that median one-year inflation forecasts among consumers climbed to 4.8% in June — a 0.8% increase since last month alone. In January, February, March, April, and May, one-year expectations were 3.0%, 3.1%, 3.2%, 3.4%, and 4.0%, respectively.

Biden explicitly brushed off such concerns during his speech:

We also know that as our economy has come roaring back, we’ve seen some price increases.  Some folks have raised worries that this could be a sign of persistent inflation. But that’s not our view. Our experts believe and the data shows that most of the price increases we’ve seen are — were expected and expected to be temporary.

Now, I want to be clear: My administration understands that if we were to ever experience unchecked inflation over the long term that would pose real challenges to our economy.  So while we’re confident that isn’t what we are seeing today, we’re going to remain vigilant about any response that is needed.

Republicans smell blood, and the Biden administration knows it. If this were not true, the speech on Monday would not have happened.

Republicans are leveraging inflation concerns as a primary critique of the President’s economic plan. After the White House boasted about Americans’ sixteen-cent savings on a hypothetical Independence Day barbecue, Republicans “pounced” — as the Left is fond of saying — on the president for being out of touch with the economic challenges faced by normal citizens.

Indeed, inflation — the erosion of a currency’s purchasing power over time — is particularly noticeable for members of the working class. The Biden administration is trying to win over this precise demographic with its omnibus legislative packages — such as the American Families Plan and American Jobs Plan. But inflation may throw a wrench in this strategy.

For another, cash — which is directly eroded by inflation — represents a larger share of a middle-class American’s assets.

In order to meet day-to-day expenses that compose a significant share of their budgets, the checking accounts and cash holdings of middle-class Americans are likely to represent a significant portion of their net worth. Meanwhile, higher-income Americans can allocate a greater percentage of their net worth to real estate, securities, retirement accounts, and other assets that accrue value over time while avoiding inflationary risks.

Despite President Biden’s insistence on building the economy “from the bottom up and from the middle out,” inflation directly interferes with this goal. Americans themselves are feeling it. And for Republicans, the only step left is to show voters why Biden may be responsible for their ever-lightening pocketbooks.