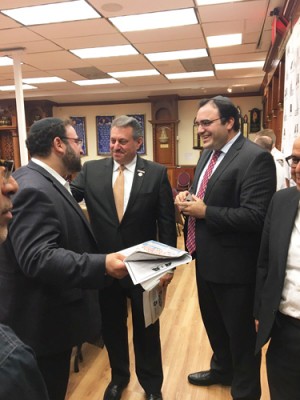 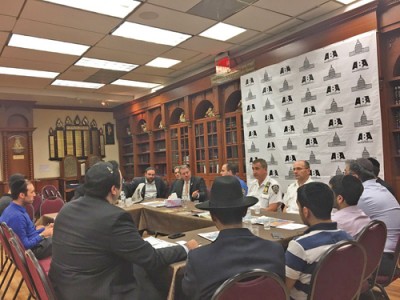 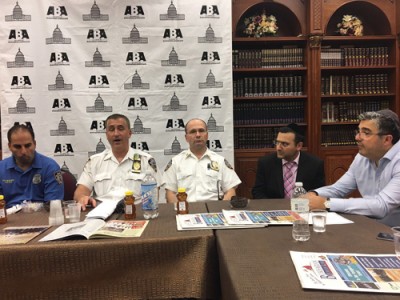 The Queens neighborhood of Forest Hills is regarded by its residents as safe, with much trust given to the police in keeping it that way. At the same time, with the High Holidays in mind, the Alliance of Bukharian Americans felt that with more information exchanged between the community and police, no place would be neglected in security. “We have a list of synagogues, including rented halls” said ABA Rego Park Liaison David Mordukhaev.

Commanding Officer Robert Ramos of the 112th Precinct recognized that while his colleagues are familiar with most synagogues in Rego Park and Forest Hills, those that operate only on holidays in catering halls should also receive the same level of protection. “We have a house of worship car that travels around religious organizations but there are places that we do not know about.” Along with the roving patrol, counterterrorism officers in special uniforms keep watch as crowds enter and leave services.

The meeting took place a couple of weeks before Rosh HaShanah at Congregation Beth Gavriel, one of the largest synagogues in Queens in terms of its building and membership. “Here we’re looking at about a thousand people at the main service,” said Mordukhaev. Although the synagogue has its own private security, Ramos offered the option of a paid detail where a uniformed officer is paid by the synagogue to stand watch for the duration of the services. Beth Gavriel Vice President Simcha Elishaev said that regardless of whether the security is private or NYPD, the presence of a uniformed guard offers comfort to the congregants, many of whom still feel some fear over the rash of arsons back in late 2015.

Rabbi Shlomo Nisanov noted that unlike Kew Gardens Hills where he lives, Forest Hills is more densely built, making crowd control and pedestrian traffic part of the considerations in security planning. State Senator Joseph Addabbo Jr. was also present at the meeting to lend support and offer his office’s services to constituents. He reminded the ABA that every precinct holds monthly public meetings organized by local precinct councils. “The 112th Precinct’s meeting takes place every third Wednesday of the month. It’s where safety is discussed.”

The work of the NYPD on the street is augmented by its all-volunteer auxiliary force that has the uniforms and marked cars, but without the deadly weapons that paid officers carry. Rabbi Nisanov added that there is also the Citizens Police Academy, where the public takes a 14-week course, learning about local waterways and counterterrorism all in a time-tested uniform.

In the aftermath of the earlier arson spree and occasional tire thefts, many Bukharian-owned mansions in Forest Hills now have security cameras installed. ABA consultant Pesach Osina suggested a list of private camera locations for submission to the precinct. Ramos agreed that knowing which homes have cameras would make it easier for police to quickly access the security footage. At the same time, he also expressed frustration in how the cameras are positioned. “A lot of times the cameras face the front door or garage but not the sidewalk. They do not go out towards the street.”

Through the ABA, local police are receiving the information needed to keep synagogues and homes safe during the month of Jewish holidays.