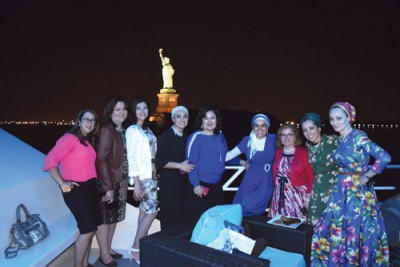 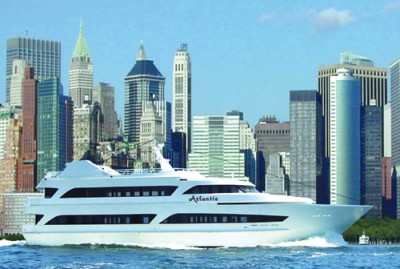 Standing at Pier 9 in Sheepshead Bay two weeks ago, one could be excused for thinking she had landed in a glamorous classic film.  An elegantly dressed crowd queued outside the Atlantis yacht as a waiter in black tie offered hors d’oeuvres.  On the dock, a woman in lace played the violin.  Crewmembers held open doors and directed guests to a buffet of sushi and salads.  A curved double staircase (housing a fish tank within the banister) led to a purple-lit ballroom.  Bukharian music played, friends laughed and socialized, and the crowd discovered the DJ stand and photo booth.  On the open top level, women took advantage of the Instagram-worthy backdrop, posing against the strings of blue lights, the lavender sky, and dozens of sailboats.  (How do they all know how to pose so expertly?  Ladies, I will be requesting a tutorial.)

What looked like a perfectly choreographed party was in fact a meaningful event.  Emet’s fourth mother-daughter gathering brought families and friends together across different generations and levels of religious observance.  More beautiful than the luxe backdrop was the feeling of people enjoying each other’s company, genuinely glad to share a night of fun and bonding.  The message of Torah and unity transcended the glamorous setting.  Emet is grateful to Caring Professionals, a Queens-based home health care agency, for partially sponsoring the event.

Emet is based in Queens and anchored by the large Bukharian community.  Over the past 13 years, Emet has reached thousands of Jewish students and young adults and inspired hundreds to return to a life rich in Jewish commitment.  Emet’s superb staff of rabbis and educators fosters within its students a desire to learn and a determination to develop a Torah lifestyle.  Anyone participating in Emet’s Step It Up events for young women can attest to this group’s pure motivation, an inspiring contrast to the jaded outside world.  It was this group of students that decided to begin mother-daughter events, so that their parents could understand and share what they were experiencing through Emet.

One such student is Sarina Kaziyeva, who has been with Emet from its inception.  Sitting on a cushioned sofa on the open deck with her mother, sister, and friends, she said, “Emet brings people together through love and excitement.”  This is a point echoed by many Emet participants: the unique combination of caring leaders and fantastic events.  Sarina’s mother shared these feelings, saying how the Emet events are always growth-oriented and enjoyable.

Channah Aranova and Rachel Kaziyeva both noted that relationships formed through Emet last even as students pass through different life stages.  Channah explained how she has more demands on her time and no longer attends Emet programs as regularly as she once did.  However, she is still as much a part of the Emet family, and can comfortably reach out to rabbis and mentors.  Miriam Simkhayeva specifically gave credit to Mrs. Rivka Muskat, Emet’s Women’s Program Director, for keeping in touch with her, long after she completed Emet programs.

Shira Fendel, who leads the Step It Up programs and was the driving force behind the event, was there with her own mother.  Not content to have the monumental preparations behind her, she also offered Dramamine to those whose stomachs did not appreciate the swaying.  (Chinese food on a moving ship?  What could possibly go wrong?)

Mrs. Devorah Kigel acted as MC for the night, opening the program as guests sat down to artistically plated appetizers.  Sharing moments from her own journey to Torah, she recalled a thoroughly American exchange with her secular parents.  Upon being told that their daughter would be leading a religious lifestyle, Mrs. Kigel’s father asked, “Will you be shaving your head?  No?  Okay, do whatever you want.”  After several years, however, the entire family can see and appreciate the positive changes that Torah observance made in her personality.

This evolution in opinion is relatable to the Emet family.  Many parents are, at first, wary when their children start becoming as religious as their own pre-Communist grandparents.  But with the passing of time, it becomes evident that keeping the Torah elevates all aspects of a person’s life, refining personalities and behavior.  These are changes that any parent will encourage, regardless of their own lifestyle.

One such parent is Mrs. Angie Borukhov, who told the guests how Emet developed her relationship with her daughter Mira.  Several years ago, Angie would never have dreamed of Mira as a religious woman.  Now she has come to understand the beauty of living according to Halachah.  Mira supported her mother through difficult times, and Angie credits Emet with developing such strength in her daughter.  In a world where it is easy to feel negative and low, family relationships are more important than ever, and Angie encouraged communication between all mothers and daughters.

Angie’s heartfelt speech was followed by a video of Emet Director Rabbi Akiva Rutenberg, who explained the origins of the mother-daughter programs.  Several such pairs appeared onscreen, and each attested to how Emet brought them closer through learning Torah together.

Next, professional singer Chana Esther Nieberg presented two songs.  The room was frozen in place by Chana Esther’s voice, hundreds of women transfixed with the sound.  When the spell broke, several women were wiping their eyes.  Naturally, Chana Esther was there with her mother, Cindy Nieberg.  The Niebergs of Flatbush are regular Emet hosts and independently involved in kiruv.

With the formal program complete, a large hot buffet opened.  Guests took their plates to all three levels, enjoying the view of the Manhattan skyline.  The yacht came close to the brightly-lit Statue of Liberty.  The moment was particularly meaningful to women who had emigrated from Communist countries.

Colorful disco lights flashed as the multigenerational crowd enjoyed a dance party and pastry buffet together.  (Never have I felt so very Ashkenazi.  Witnesses to my dancing efforts may still be laughing.  At least I tried, okay?)  The evening coordinators took the opportunity to surprise Sara Basiratmand, Emet’s Program Coordinator and general backbone.  A circle of glow sticks and light-up rings formed around Sara and her mother as everyone wished Sara a happy birthday.  Sara maintains relationships with hundreds of Emet students and staff, and each one considers her a genuine, beloved friend.

When the Atlantis docked at 11 p.m., an energized, happy, and unified crowd disembarked.  Esther Matatov spoke for everyone when she said, “It was incredible! You can’t miss Emet’s events.”