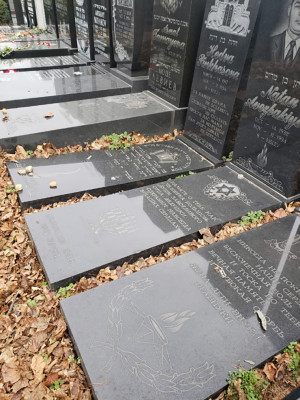 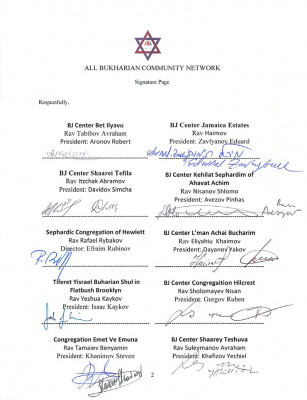 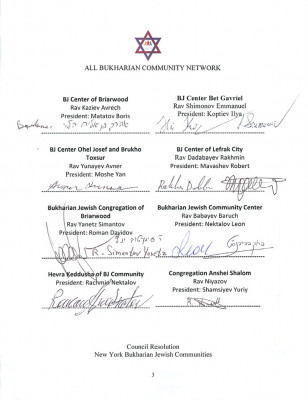 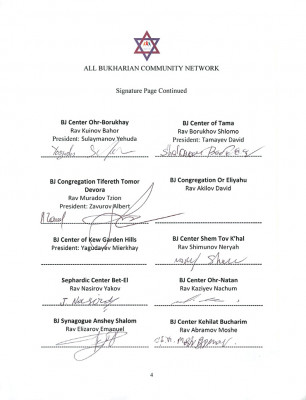 In November of 2020 we published an expose “Unearthing Problems At Mount Carmel Cemetery” revealing a series of intolerable actions taken by the management of the Glendale based burial ground also referred to as the Cooper Avenue cemetery that is a final resting place for both Ashkenazim and Sepharim. The article brought widespread attention to the issues, but sadly graves continue to sink.

The All Bukharian Community Network (ABCN) was successfully established in the beginning of the pandemic to bring a unified voice to advocate on behalf of the Bukharian community. As more families experienced unfortunate death, the inadequacies at the cemetery came to light. Many were scared to confront the cemetery owners especially during a raging pandemic. ABCN stood up for the community.

Rabbi Rafael Zavalunov announced a resolution signed by rabbis and representatives of the Bukharian Jewish community, “This document shows that our community can unite into one fist, have a united goal and come to a united decision,” adding, “The matter at hand is the collapse of monuments at the Mount Carmel Cemetery.”

By June of 2020, posts of cemetery desecration were revealed on social media in Bukharian circles; the community was rightfully scared and were reminded of a similar situation in Samarkand, Uzbekistan. ABCN leaders did their utmost to calm the community and urged peers not to stress. It was decided that Joseph Lieberman, a retired licensed engineer from Jamaica Estates well versed in this issue, would be tasked with offering a solution. Lieberman awaited the opportunity to see a live foundation laying to arrive at his determination.

Yuriy Danielov, a leader of the effort who once restored a cemetery in Tashkent, has taken on the Mount Carmel plight. Danielov has been involved in similar efforts for nearly a quarter century. Together with Lieberman they arrived for a foundation laying but were turned away once informed that the cemetery would be closing. Lieberman would not tolerate such action and displayed his credentials demanding access. It was literally min ha’shamayim when the pair entered as it was Yuriy’s brother’s grave that was being prepared – a clear message that their efforts were necessary. While they filled David Danielov’s foundation, the workers explained that because of the commotion caused in the media, a decision was made to make the final part wet and pour the concrete last. Lieberman noted that the soil is also quite heavy and that this tactic was incorrect. The workers sent the pair to discuss their dilemma with management. Scared for the safety of his brother’s plot, Yuriy announced that he would bring rebar the following day to reinforce the concrete. When he returned, the concrete had already been poured.

For the next three months ABCN representatives contacted cemetery management to no avail. Finally, Leon Nektalov, a well-recognized Bukharian community leader, managed to get an appointment for August with Tom Augoustatos, Director of Operations for Mt. Carmel. Leo Yakubov, a respected lawyer in the community, was also involved. At this point, Augoustatos advised ABCN to draft a letter as it would bear better results. Also, Lieberman realized that an engineer more involved in the day to day operations would be necessary, and Alex Yakir was chosen.

Yakir prepared an engineer’s report that was sent to the cemetery and to Lewis Polishook, Director, New York State Department of State, Division of Cemeteries. Polishook responded and agreed to a meeting on September 20, 2020, with a solitary representative. David Mordukhaev, another active community member, appeared at the cemetery first and joined Polishook. David explained the report and that the foundation requires corrections. It was noted that the time to experiment was over and following the sketch made the most sense.

Due to the extreme weight of the headstones, it made the most sense for rebar to be used from head to toe and not across the width as there was not enough room between graves due to management compacting the area. The community decided to use smaller caskets that would allow the new rebar option to become plausible. Unfortunately, the cemetery representative did not understand the sketch. Yuriy, who had been patiently waiting outside with Steven Yagudayev offered to show a physical sample. Augoustatos, on behalf of the management, agreed to the rebar bridge described and Mark Stempa acted as a moderator on behalf of the cemetery to ensure follow through. Experimental pouring of cement for the foundation of the monuments would be immediately suspended and, in the future, cement would be poured according to the proposal of ABCN’s engineer. This followed with an agreement for a meeting with Augoustatos the following Monday, a formal photo, a handshake of the agreement, and another letter from Nektalov and Yakubov. By Monday, Augoustatos had said he would need to reschedule and pushed off ABCN reps for over a month giving him ample time to correct any mistakes. By October, Augoustatos presented the option of a quarter inch metal plate for the engineer to approve. This option was deemed unsuitable, and another letter was sent to which a reply was sent that the conversation was closed. Rabbi Zavalunov reported, “I am saddened to say that there are opportunists in our community who for various reasons managed to sabotage our agreement and as a result, today, the pouring of cement for the monuments does not meet elementary standards of construction requirements. Therefore, we see crooked and sagging monuments from those which have been installed recently.”

Steven Khanimov, the representative from the Emet Ve Emuna Fund, spoke with Polishook who advised that ABCN could not interfere as the graves were owned individually and not by a lot as a community; each family would need to speak out.

Bukharian families contacted were scared to speak out believing that the mafia and retired police officers control the cemetery. Polishook asked for 10-15 emailed complaints and stated that the management would then be changed. This request was successfully followed up on. Abo Leviev, and Benjamin Khanimov for instance sent in emails that their mother’s grave was cracked. They requested to pay for the concrete themselves to create the necessary bridge. This request was never allowed and Polishook eventually hid behind regulations that barred him from acting.

By February of 2021, Polishook stopped returning inquiries and a new meeting was arranged with the management’s engineer, Mr. Ronald Ogur and Yakir. Ogur said that a special fiberglass wall supporting eight tons would suffice. It was suggested that steel fabricator plates would support the head, foot and middle of the vault. The concrete vault being used is an inch thick, along the surrounding walls. Management modified the ledgers’ size to be required from 12” to 8”, and now it is part of the new rules and regulations of the graveyard. The weight of the ledgers are over 2000 pounds, which causes pressure on top of the vaults. It was then suggested to get vaults that are made from fiberglass that can sustain eighteen tons to sixteen thousand pounds. The vaults were not made or designed to sustain or hold the size of the ledgers used in our community. The amount of the vault’s weight causes too much pressure to sit on top of the ledgers. It was then suggested that if the actual vaults are reinforced from two to three inches thick, this could be a possible solution. He mentioned there are times when vaults arrive cracked and then must be returned. This is where fiberglass vaults or metal vaults became an option, but due to religious concerns, they are not an option. Steel fabricator plates will not work due to the conduction of the metal plates, and the fact that it does not fully solve the issue of the foundation pouring practices of the cemetery. ABCN visited the fabricator of the vaults and found that they would be able to get a vault that was thicker with metal rebars, along the walls of the vault, but notes that the cemetery must modify their foundation pouring practices and pour the foundation in the bench method that was previously presented. This method includes pouring the foundation at the head and the foot of the vault.

Instead, it was agreed that a new customs size two inches smaller than the generic 87” would be used giving more space for the foundation. To pay for this effort of $22,000, ABCN together with Beth Gavriel Community Center raised the funding.

It should be noted that when a new grave was dug, pictures and video from funerals did not exhibit cracking from the vaults and it appears that the damage occurs during the excavation process. It is also vital to note that the recent drama is due to structural integrity issues causing monuments to sink because of a change in how the concrete is laid. Years ago, there was no issue and graves all remain standing from those eras as do mausoleums.

Mount Carmel was chosen by Rachmin Nektalov, a community activist who works with Chevra Kadishah. He purchased a couple of lots that the Bukharian community uses today. ABCN reached out to Nektalov throughout the process and he suggested a lawsuit, but by April of 2021, Nektalov realized that no fruit would bear from a conversation with the cemetery, leaving ABCN at a loss.

David Aronov, a politically connected ABCN member, arranged a meeting with Assembly Member Andrew Hevesi of Forest Hills and Rego Park. This meeting was followed up with a well-attended meeting at Beth Gavriel on December 5th that included many rabbinical leaders and affected family members. It was decided that a letter from Bukharian rabbis, leaders, synagogue presidents, and the leadership of charitable foundations in Uzbekistan who have vast experience in this matter should be sent to the cemetery management, and this was done in March of 2022. “This document once again demonstrates our unity and desire to negotiate peacefully with management of the cemetery,” said Rabbi Zavalunov. Since our requests have been denied, this article has been prepared to detail the course of actions taken. Currently, other democratic methods of achieving justice and respect for religious and human rights are underway.

In a follow up meeting that Assemblymember Hevesi held with the cemetery, the management seemingly lied to the elected official stating that there was just one issue. Ongoing lawsuits from 2011 and 2018 suggest otherwise. Earlier this week, on May 5th, Hevesi agreed to meet the community again to propose a solution to the modifications of the concrete pouring practices for the foundation to our deceased family members.

A closing remark must be made that there have been issues of price gouging this past July of $45,000 to $250,000 that were resolved by the publication of articles. The Ashkenazic portion of the cemetery has also been victim to vandalism, an account that has been denied by Mark Stempa. Additionally, graves have been run down by tractors causing terrible damage. The Bukharian community as the biggest consumer in the cemetery must not remain silent. This is us putting a peaceful foot forward to reach a fair compromise and acknowledge our clear-cut recommendations.

We are currently in the season of pouring concrete and the cemetery is in full swing preparing foundations. We urge our community to meet this Sunday, May 15th at 12 p.m. at 106-16 70th Avenue, Forest Hills.