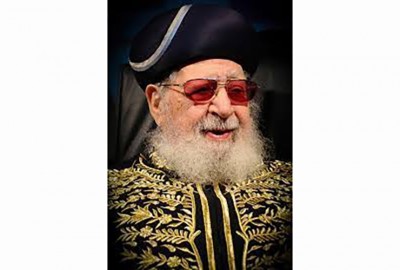 Chacham Rav Ovadia Yosef zt”l was the former Sephardi Chief Rabbi of Israel and one of the foremost Talmudic authorities of his generation. On Motzei Shabbat, October 9, Chazaq, Stories to Inspire, and the Bukharian Jewish Link hosted a beautiful virtual commemoration on the occasion of the Rav’s eighth yahrzeit, which was 3 Cheshvan.

Chacham Rav David Yosef shlita, son of Rav Ovadia Yosef, spoke first. He shared that Noach saved himself, but he didn’t save anyone else. The Midrash teaches that Hashem told Noach that if he had shed one tear before the Mabul, He wouldn’t have brought it. During the 120 years that Noach was building the teivah, he was trying to make baalei teshuva. However, he couldn’t make baalei teshuva because he was cold and didn’t show people that he cared about them. We have to care about our brothers and all of Klal Yisrael. He shared that his father loved to study Torah. He traveled from place to place by bus, teaching Torah, because he knew that this was the way to bring Torah to people, and he loved them. He said, “Hashem wants me to give my life to bring people to Torah.”

Rav David shared that they are trying to continue his father’s mission. He noted how Chazaq has brought more than 1,000 children from public school to yeshivah. “This is the way to continue my father’s work – to bring their souls to help them remain Jewish. Everyone has to follow the way of my father, and the main way is to bring Jews to Torah and mitzvos.”

Next, Rabbi Uri Lati, well-known speaker, shared that every Sephardi’s dream is to be like Rav Ovadia Yosef. “His wisdom was surpassed only by his love for every Jew.” Rav Ovadia would share stories and spread Torah. “He was a walking Sefer Torah. He was the Moshe Rabeinu of our time.” He devoted his days and nights to Torah study. “Don’t ever lose faith in your students. He never lost patience. He always invested in everybody and always taught Torah to everybody.” Rabbi Lati shared that we know that, if we invest in something dear to us, it will come with siyata diShmaya.

Next, Rabbi Ilan Meirov, Director of Chazaq, spoke about Rav Ovadia Yosef’s mesirat nefesh. He loved every person and he encouraged parents to send their children to yeshivah. We live in a generation where people look to kill some time. Chacham Yosef excelled in the idea that time is life. Every moment passes and you are not getting it back. He taught everyone to appreciate every moment of life. “Do something constructive. Do something productive. Get involved in a mitzvah. Spend time with your family. Go to a shiur. Don’t kill time!”

Rabbi Meirov noted that Rav Noach Weinberg zt”l used to ask students how much money they would give him for their last month, their last week, their last day. No one would trade money for that, and so if that is how we think of our last day or week, then why are we giving it up for nothing, spending time on things that are meaningless? “Why not spend time with learning Torah, doing mitzvos, and being with family? Chacham Yosef took account of every moment of life. Every free moment he took out a Sefer to learn. “Think over and do personal introspection on how you are dealing with your day. See how much time you can spend learning. Everyone should do this on his own level and see how he can increase his learning.” Spend time learning on Shabbos. “Don’t kill your time. This is the lesson of Rav Ovadia Yosef zt”l. Take your time seriously.”

Following this, Rabbi Yaakov Mizrahi, well-known speaker, stated, “If we knew what we lost, we wouldn’t stop mourning.” Why did Hashem place a window in the ark? The answer is because Hashem told Noach not to forget to look outside of your daled amot. If you see that someone else needs help or chizuk, stretch out a hand to him. How many Jews would like to come hear a shiur or meet a new rabbi. They are waiting for chizuk and they are drowning in a mabul. “Whoever is able to stop someone from sinning and doesn’t, then he gets punished as well.” As Benei Yisrael, we are responsible for every Jew. “Rabeinu was a walking Sefer Torah. You saw him and you would see life.” People went into his shul to see the shine of his face. Their simcha was his simcha and their pain was his pain. He went from city to city by bus teaching Torah. He spent sleepless nights trying to be matir agunot. He took the responsibility on his shoulders. He would cry for them.

He had 25,000 sefarim in his personal study, and inside his books were notes on the margins or letters. Rabbi Meirov then shared the copy of one beautiful letter from Rabbi Belsky that was found in one of Rav Ovadia Yosef’s sefarim. The letter shared that Rav Belsky thanked the Rav for visiting Yeshiva Torah Vadaat and for his beautiful words that gave them a lot of strength to continue in this holy project of the Yeshiva and to make it stronger and to make it greater. Rav Yosef was a Sephardi rabbi connected to everyone in am Yisrael. “When Hashem sees you care about His children, you get more siyata from Hashem.”

We have to learn not only for ourselves but to teach to give to others. We have to love am Yisrael. We have to pray for others and expand our horizons and realize that there is a lot more we can do.

Then, Rabbi Yosef Palacci, Rabbi of Derech Emet Torah Center in Brooklyn, shared that Rav Ovadia Yosef breathed Torah. He lived for Torah. “If you don’t have Torah in your life, then what is life?” Hashem gave us a powerful soul from the Kisei HaKavod. He gave us a powerful neshama, because we have a big mission. Let’s not get influenced by the culture of the goyim. We should be the best soldiers for Hashem that we can be.

This inspiring event can be viewed on www.TorahAnytime.com.