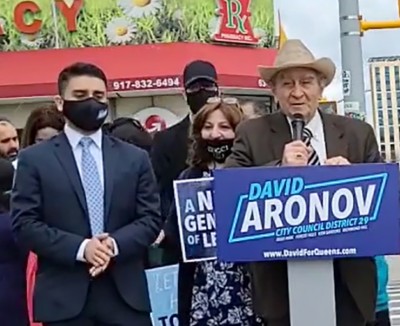 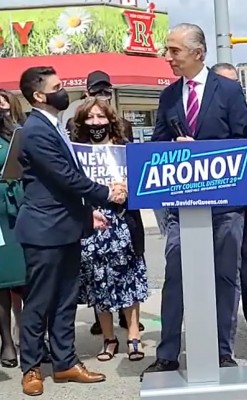 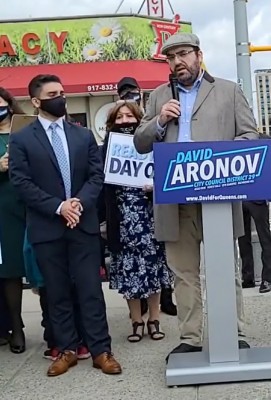 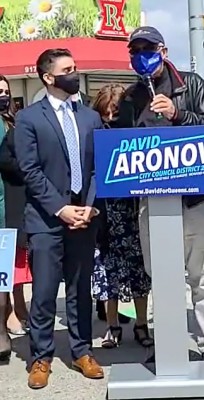 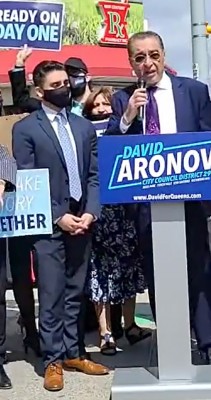 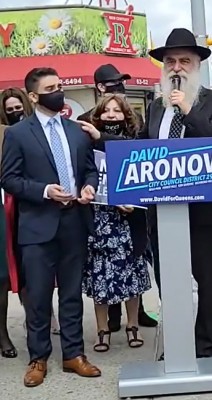 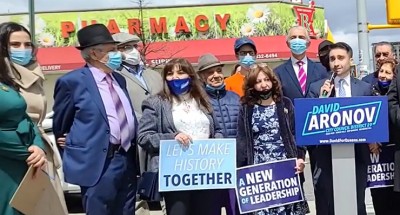 David Aronov, a candidate for City Council in District 29, held a gathering of Bukharian community leaders this past Sunday morning, April 18, on the corner of 108th Street and 63rd Drive in Forest Hills. Emotionally, foremost members of the Bukharian community announced unwavering support for Aronov as his candidacy is a historic move for the immigrant community seeking to have their first representative in elected office locally. Aronov who is poised to become the first Bukharian-American to hold political office in New York is leading a tireless grassroots campaign to awaken the communities of Forest Hills, Rego Park, Kew Gardens, and Richmond Hill.

Leon Nektalov, a vocal community activist and businessperson, began the morning saying, “Within 45 years, this is the first time we have seen a Bukharian run for City Council. Bukharian Jews have been waiting for this day and we have never been prouder to be Bukharian Jews. Our strength is in our unity.”

Aronov is the founder of the Bukharian Jewish Union, a non-profit that unites young professionals in the community and in the past few years has worked to combat the opioid epidemic. For over seven years, Aronov worked in the City Council in the office of Council Member Karen Koslowitz, and most recently served as the Queens Lead Organizer for the City’s 2020 Census efforts. Aronov is an ever-present figure in efforts that work to increase Bukharian representation in political life and a champion for issues important to the community such as language justice and increased funding for community centers and after-school programs.

Ilya Koptiev, president of the Beth Gavriel Community Center, took the podium next adding, “I know David for over seven years and have seen him do wonderful things for our community.”

Rabbi Aharon Chein from the Chabad minyan at the Congregation of Georgian Jews mentioned, “David is young and able to be the bridge between the different generations. Our community of Georgian Jews and Bukharian Jews – all of immigrants – know that David understands our needs.”

Aron B. Borukhov, Esq., the managing director at Concept Equities/Hillbrook Capital LLC and a noted community leader, explained, “It is our responsibility to do what is right for our city as we suffered the most during this pandemic. It is time that our community after so long in this wonderful country put one of their own – sons or daughters into office – someone who knows our community from within.”

David Mordukhaev, a cofounder of the Alliance of Bukharian Americans, also spoke of the historic moment, “In the epicenter of the Bukharian community 108th Street – our community leaders gathered to show unity and solidarity. Our Sages teach us to say little but do much. David says little but does a lot. Anyone can talk, but we need action.” Mordukhaev also called on the community to ensure that their family members are registered to vote.

The event also featured words of encouragement from Aron Aronov, founder and director of the Bukharian Jewish Museum, “Since the Soviet Union collapsed, we have already integrated successfully into the American society with lawyers, engineers, and physicians. Today, we want our voice heard in politics.”

“My story is the same as yours, as your children, as your friends and as so many members of our community and of New York City. It is a story that starts with my parents who came to this country to seek a better life, one free from religious persecution and with the hopes and dreams of seizing the opportunity this country gives to those who come to it with nothing,” said Aronov as the conclusion of the program. “We have a community here that I would not trade for the world. It is one where everyone looks out for each other, where holding one hand to pick someone up doesn’t involve holding one out to push someone down.”

Aronov pledges to bring a Bukharian voice and vision to the table in a way that Queens and New York City has never seen before. He as well called for education reform, affordable housing, and noted his advocacy from his non-profit the Bukharian Jewish Union that took a leading role during the opioid epidemic the community faced. He also called his work as a leader in the Queens Census count a pivotal way to understand how funding decisions are made for the community. Aronov then touted, “Under my leadership, our district received one of the highest self-response rates in the City.” He as well recounted his seven years working within the confines of the City Council gaining knowledge to one day lead the community.