Details
By Times of Israel 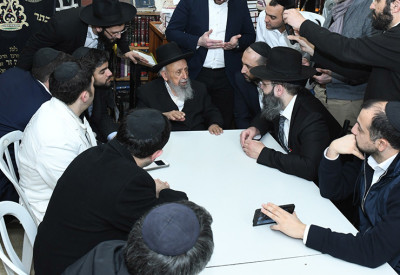 Rabbi Shimon Baadani, one of the founders and spiritual leaders of the Sephardic ultra-Orthodox Shas party, was niftar on Wednesday morning, January 11, after an extended illness at the age of 94.

Baadani, a firebrand rabbi who studied in Israel’s top yeshivot, was mourned as the “splendor of our generation” and a “soldier in Hashem’s wars” by his Shas movement.

“I am broken and pained by the stormy passing of the elder of the rabbinical leadership council, my teacher and rabbi, the glory and splendor of our generation, a genius of humility and awe [of Hashem], Rabbi Shimon Baadani, may his pious and holy memory be for a blessing,” said Shas leader Aryeh Deri.

“Oy, the ship has lost its captain,” he said. Leaders from across the political spectrum similarly mourned Baadani’s death.

“Rabbi Baadani, who served as president of the rabbinical leadership council for the Sephardic public in Eretz Yisrael and around the world, was also characterized by his perseverance. From a young age, he studied his Talmud, gave classes, led yeshivot, and yearned to return Sephardic Jewry to its glory,” Prime Minister Benjamin Netanyahu said. “I send my deepest condolences to his family and all those who loved him.”

“The passing of Rabbi Shimon Baadani is an enormous loss for the world of Torah. I will always remember our meetings and his deep concern for the entirety of Israeli society,” said President Isaac Herzog.

In keeping with Jewish traditions of rapid burials, Baadani’s was scheduled for 1 p.m. on Wednesday in the Ponevezh Yeshiva Cemetery in the ultra-Orthodox city of Bnei Brak, outside Tel Aviv. Anticipating that thousands of people would come to the funeral, the Israel Police said it would be closing the surrounding roads beginning on Wednesday morning and would provide security for the event.

Baadani was born in 1928 to Dawid and Haviva Baadani, who had immigrated to then-Palestine after World War I, settling in the northern coastal town of Hadera.

Baadani studied at the Lithuanian Beit Yosef-Novardok Yeshiva in Jerusalem before transferring to the Old City’s Sephardic Porat Yosef Yeshiva, which was later destroyed by the Arab Legion in 1948 during the War of Independence. (It has since been rebuilt.)

After the war, Baadani helped create a new branch of the Porat Yosef Yeshiva in the Israeli-controlled West Jerusalem, first as a member of the faculty and then as head of the yeshivah. In those early years of the state, Baadani became involved in extreme religious politics, joining Brit HaKanaim.

While he was head of the yeshivah in Jerusalem, Baadani moved to Bnei Brak, where he co-founded the influential Kollel Torah V’Chaim, splitting his time between the two institutions.

In the early 1980s, he helped found the Shas movement, a political party that represented Sephardic ultra-Orthodox Jews. Until then, Sephardic Jews — principally from Middle Eastern and North African countries — were represented by the Ashkenazi Agudat Yisrael, but felt that their voices and concerns were insufficiently heard.

Baadani quickly emerged as a prominent voice in the movement and served on its rabbinical leadership council, eventually becoming its most senior member. Last year, after the death of Rabbi Shlomo Cohen, Baadani was named president of the rabbinical leadership council. Baadani regularly spoke fiercely against Shas’ political rivals, occasionally sparking public controversies.

In 2006, Baadani explicitly blamed former prime minister Ariel Sharon’s debilitating stroke on the fact that the premier had partnered with the secular Shinui party. More recently, in 2014, Baadani made waves after calling then-finance minister Yair Lapid “Amalek” over Lapid’s cuts to yeshivah stipends at the time and other moves meant to encourage ultra-Orthodox Israelis to enter the workforce, which were seen as antagonistic.

Despite his revered stature and national influence, Baadani was considered a humble and pious man, living in a small apartment in Bnei Brak and giving out his direct phone number to anyone who asked.

At the age of 31, Baadani married Shulamit, and the two had three sons, all of whom became rabbis, and four daughters. Shulamit died in September 2020 at the age of 88. Yehi Zichro Baruch.

By Times of Israel