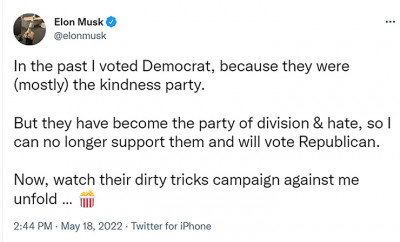 Once upon a time, politics and business were two different worlds.  Not anymore.  These days there is a clear link between the two, and anyone who doubts this need only look at the growing number of billionaires tweeting about politics rather than investments. Will this trend affect the upcoming mid-term elections and beyond? Could it affect the markets?  The answer to both is “Yes.”

One of the billionaires who made an art of mixing politics and business is Donald Trump.  Long before he ran for office, he established ties with many politicians in and out of New York, endorsed some of them, contributed to their campaigns, and spoke at rallies on their behalf.  When Trump became president, he tweeted to a degree that had never been done before, and investors hung on every one of his words.

Former mayor and still super-rich Michael Bloomberg also tried to mix politics and business but was not even nearly as successful.  That, however, hasn’t deterred other billionaires from trying their luck.

Now that Jeff Bezos, one of the richest people in the world, is no longer holding the reins at Amazon, he is freely expressing his political opinions openly.  Crypto billionaire Sam Bankman-Fried and Michael (the Big Short) Burry also have gotten involved in politics.

Given the clear and growing connection between politics and big money, it’s obvious the super-rich will continue to influence markets, politicians and politics.

And Now The Crypto Rich

The humongous gains in some crypto currencies has led to a new breed of billionaires, some involved in politics.  One is Sam Bankman-Fried, who said he wants to help make the world safer and better for children.  However, he didn’t explain exactly how he would do that.

In late May, he said he is willing to spend a great deal of money on the next Presidential race.  Bankman-Fried made piles of money in arbitrage when he noticed a significant difference in the price Bitcoin was trading at in the US and its price in Japan.  He took advantage of that disparity by purchasing Bitcoin for the lower price in the US and selling it in Japan where the price was higher.  This was a very lucrative effort, and he sometimes made as much as $10 million in a day–and he made these trades for years.  Today he owns one of the largest crypto exchanges in the world.

Politics is his new interest.  In recent years, he has donated an estimated total of $200 million to help elect various politicians, and has said that he will spend an additional $100 million in the next political cycle, but may raise that level to $1 billion or even more.

In the past, Bankman-Fried has favored Democrats, but has indicated that going forward he will make decisions on individual politicians rather than on an entire party.  He donated heavily to Biden’s campaign in 2020.  With an estimated net worth exceeding $20 billion, Bankman-Fried can easily afford to continue making huge donations to his favorite politicians.

Elon Musk, the richest person in the world, is no stranger to politics and has been speaking out and tweeting about various issues.  And he has had some very public “exchanges” with well-known politicians, including Dem. Sen. Elizabeth Warren and Dem. Congresswoman AOC, among others.

Several weeks ago, Musk tweeted that in the past he has supported Democrats because they were the “kindness” party and interested in “compassion and humanity.”  He added, however, that they no longer promote those ideals, that they have become the party of “division and hate,” and that in the future he will vote Republican.

The individuals mentioned above have different political philosophies but all are savvy investors and have very deep pockets.  Still, the mother of all political contributors has to be George Soros, a self-made billionaire who decades ago decided to support the politicians and groups whose politics most closely resemble his.

Soros has been supporting left and far-left groups for decades, but there is a difference between his activities now and then because what was considered left years ago is mainstream today.  Arguably, he has done more than anyone else in getting far left-oriented politicians elected, and their policies widely accepted, and to move the entire political spectrum far left.

These days, for example, DAs across the country refuse to prosecute criminals.  Mayors demonize police officers and support defunding the police, which makes no sense because crime is soaring. Security guards watch as “grab and go” looters fearlessly steal merchandise, and hoodlums follow ordinary people who go shopping back to their homes to rob them.

It’s mind-boggling that incidents like these actually happen every day; that they could happen at all is only possible because very far left organizations, such as those funded by Soros and other far-left contributors, give them crucial financial support.

Some news show hosts believe there’s much more.  They say ideas like open borders, ridiculing religion, and of openly promoting very alternative lifestyles to very young children are all part of a very long-term strategy–implemented very slowly by certain groups who are supported by unscrupulous politicians and very talented individuals who care about nothing but money.

Would you say that these policies are a matter of philosophy alone or that someone (or more likely some people) are making incredible fortunes off of them?  Whatever the answer, not all that long ago, policies like these could never even be discussed, let alone implemented, particularly when so many people oppose them.

It would be very easy to say, “let the super-rich worry about these things; I’m concerned about the price of gasoline and food shortages.” But that would be a mistake.  Policies supported by extreme groups at both ends of the political spectrum can and do affect our lifestyles, finances, safety and well-being, and that’s even more true regarding our children.

The next time you read about billionaires taking a stand on political issues, listen very carefully, because they’re not just letting off steam.  You may very well be reading tomorrow’s headlines.  And with the country politically divided and so many people stressed to the breaking point, we are truly living in precarious times.