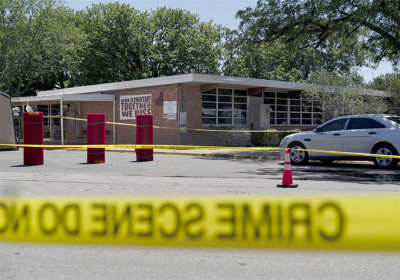 Tragedy struck again, this time in Texas. Like many other times before, the vultures descended on the victims, piling them up high to create a stage for their political purposes. They stand upon this stage not to make societal change, but to anger enough people to swing the electorate in their favor.

For anyone who thinks that guns are the problem–and should we only pass more gun laws we’ll stop tragedies like this–ask yourself a few questions: Why was the topic of conversation after Buffalo the scourge of white supremacy, as opposed to guns? And now that Uvalde happened, it's back to guns? Why is it that no one talks about guns when there is a cavalcade of shootings every weekend in major cities like Chicago?

This is a contentious issue, and unfortunately one that will not be solved because there is no interest in focusing on the real problems in this country. We have mental health crises, we have fatherless homes, we have broken communities. If even one of these issues are addressed, then these tragedies would begin to resolve themselves. But they are not addressed. Instead, they want to talk about guns. So let’s talk about guns.

The United States has tens of millions of gun owners; nearly 44% of the population owns a gun in the household. Half of the people surveyed who don’t currently own a gun could see themselves one day owning a gun. There are hundreds of millions of guns in this country. If everyone who picked up a gun turned into the monster that attacked the school in Uvalde, you would be forced to run serpentine to the mailbox in the morning. Blaming guns is as foolish as blaming violent video games. It’s a scapegoat, not a solution.

Make the problem more micro. Let's say there is a spate of burglaries in your community. Do you scream and protest for the government to ban lock picks and crowbars? Or do you get a security system for your house? That's essentially what the argument is. One side is scapegoating the problem to the tool that was used in the heinous act, and the other side is trying to prevent further atrocities.

Democrats even mock the idea of increasing school security. California Representative Eric Swalwell tweeted, “They would sooner turn schools into prisons than pass gun-safety laws,” when Ted Cruz pointed out the security flaws in the school. Patton Oswalt mocked it by saying, “We should put banana peels around the entrance to every school and also trip wires that trigger huge custard pies that hit intruders in the face and a device that pulls down their pants so they hop around in a circle and also…” Democrats blocked bills pushing for school security–and have been doing so for a decade, since Sandy Hook.

Meanwhile, the President of the United States mocks the idea of gun ownership, repeating that same tired joke of deer wearing Kevlar vests in an attempt to say that we do not need an armed populace. One does not need to be a student of history to know why the Second Amendment is fundamentally necessary to secure the freedoms enshrined by the Constitution. You can ignore the Revolutionary War, the disarming of civilian populations by fascists and dictators from Hitler to Hugo Chavez, and even the ability for armed populations to keep the American military at bay in Vietnam and Afghanistan. Knowledge of those events are not necessary, because there is literally a war happening right now that everyone knows about, which is only still occurring because the population is armed. The only reason that Ukraine still has a fighting chance against the far larger and far more powerful Russia is because of the civilian population taking up arms against foreign oppressors in the early days of the war.

So to answer those questions posed earlier, why are they talking about guns now, when after a similar attack 10 days earlier the conversation was all about white supremacy? The answer is simple and cynical: power. The Democrats are losing. They have been in power for a year and a half, and every aspect of American life is immeasurably worse. Their poll numbers are cratering, and analysts predict major losses in November. They are throwing everything they have at the voters, from abortion to racism to guns, hoping something sticks. But they have no real solutions. They can’t get inflation under control, they can’t lower gas prices, and they certainly can’t keep children safe. It’s up to the voters to get them out of power and put people in place who can govern, instead of those who use their office to accumulate more power.