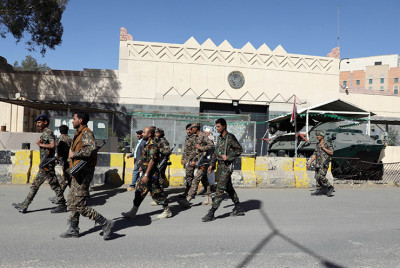 Did you know that Iranian-backed Houthi rebels in Yemen stormed the former U.S. Embassy last week and held U.S. citizens hostage?  Unless you’re an avid reader of the Washington Free Beacon, you probably didn’t. Why was such a monumental story largely ignored by the vast majority of politicians and media?

Taking a step back, Yemen has been in a state of civil war since 2014.  It is essentially a proxy war for a full-scale conflict in the Middle East, with Saudi Arabia backing the Yemeni government and Iran backing the Houthi rebels.  In 2015, the U.S. officially closed its embassy, but still left staff in the building. In 2018, reports revealed that the U.S. was selling arms to the Saudis, which were then sold to the Yemeni government. In January 2021, the Trump administration designated the Houthis a terror group, and a month later Biden removed that designation.

That’s the short version of a conflict that has killed hundreds of thousands of people and displaced millions more.  Americans, who are notoriously ambivalent to international news that doesn’t involve Israel, are largely unaware of the conflict.  In theory, however, American hostages should make some headlines, shouldn’t they?

Apparently not, as legacy media outlets such as ABC, NBC, CBS, CNN, MSNBC, the New York Times, the Washington Post, the Los Angeles Times, the Chicago Tribune, the Boston Herald, the Baltimore Sun, and many, many others have essentially buried the story with a simple explainer of a State Department statement to Fox News.  After all, they have far more important stories to cover, like the trial of a young man who shot people in self-defense last year or Taylor Swift’s new album.

Perhaps the idea of American hostages isn’t news.  After all, it’s been over two months since Joe Biden abandoned hundreds of Americans, thousands of Green Card holders, and tens of thousands of allies behind Taliban-controlled enemy lines in Afghanistan.  And since the Embassy closed six years ago, whoever is still in Yemen deserves whatever happened to them, right?

Consider the case of Otto Warmbier, the American college student arrested in North Korea in 2016 for stealing a sign and sentenced to 15 years hard labor.  Aside from the perfunctory articles, there were few op-eds, few strong opinions on how America should respond when a dictatorship subjects one of our citizens to cruel and unusual punishment. In fact, most of the responses from the media establishment were watered-down versions of “he deserved it.”

Remember when 10 U.S. Sailors were captured by Iran and held overnight, and a terrifying and humiliating video of their capture was spread by Iran to embarrass America?  It wouldn’t be surprising if you didn’t, as there was little discussion of it after June of 2016.  No repercussions for Iran, no discussions of payback.  Simply an apology for being in the wrong place at the wrong time and forgotten about.

This is not how the most powerful nation in the history of the world can and should deal with dictatorships, tyrannies, and despots.  Americans cannot be held hostage without repercussions–severe repercussions; otherwise, the nations who are seeking a greater foothold in their regions will be emboldened. This isn’t conjecture; this is fact.

Currently, there are 100,000 Russian soldiers amassed on the Ukrainian border, a repeat of the invasion we saw of Crimea in 2014.  Chinese military drills are being conducted in the Taiwan Strait, foreshadowing a potential invasion of the island.  North Korea is claiming to have begun testing hypersonic missiles, a capability we already know that China has.  ISIS-K is increasing its power in Pakistan and Afghanistan and desires to reclaim the caliphate that was destroyed.

When no one in America cares that Americans are held hostages, why would anyone care when millions of people are displaced or murdered because of the lack of resolve that we have at home? We have the means and ability to calm the waters on the other side of the world, something we did during the Trump administration.  What we lack is the will, for now. That will only become available when a photographer snaps a sad enough picture of a dead child or mourning mother, and then we jump into action. But by then, it is far too late. Maybe if we paid attention now, when Americans are under attack, we would see results in the future. But don’t hold your breath.