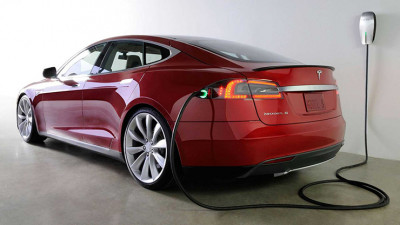 You don't have to be Sherlock Holmes to discover that electric vehicles (EVs) are popping up all over the place. If this trend continues, new billion-dollar industries will spring up, long-established industries could fail, and ordinary life could become very different.

These are some of the forecasts made by Whitney Tilson, a very successful hedge fund manager who’s made a fortune by recognizing important new technologies and investing in companies that successfully commercialized them. His track record is so good that CNBC called him "The Prophet."

EVs already are a significant part of the economy and will become even more important as their sales increase.

"They will transform the energy and insurance industries, and parts of healthcare too by saving tens of thousands of lives each year and helping prevent even more serious injuries," Tilson says. And, he adds, investors who jump aboard early could be very richly rewarded for their efforts.

If these predictions sound overly optimistic, bear in mind that they were made by someone who has a very high batting average. In 2018, Tilson called the exact date Bitcoin would peak, and also said exactly when marijuana stocks would collapse. On March 25, 2020, as the market was at the depth of its worst decline in decades, he stated, "This is the absolutely best time to be an investor," a view that went against the herd but that proved to be exactly on target. Also, he correctly forecasted sharp declines in the shares of dozens of companies, and jumped aboard some of the best-performing stocks very early in their upward moves.

EVs boast breakthrough technology, quiet engines, and are environment friendly, but Tilson's optimism about them has nothing to do with these benefits; rather, it is based exclusively on economics.

These vehicles are already competitive with conventional cars, require just a fraction of the cost for maintenance, and are becoming much less expensive to charge. As battery technology continues to improve, costs will drop even more and their advantages will become even more pronounced.

Tilson is convinced that EVs represent the future of autos and trucks, and will dramatically change the way we shop, travel, commute, the cost of energy, and many household goods and services. "An enormous sea change is coming to our society and an investor frenzy is just beginning," he says.

One of those changes is TaaS, which stands for "Transportation-as-a-Service." Currently, most families own at least one vehicle, many have two, and some have three or more. Tilson says this will change; when we want to commute or travel we'll simply press an app on our phones and get the kind of vehicle we need. As this unfolds on a mass scale, it will create major changes in the economy, specifically, personal cars could become obsolete. Some car dealers and even auto-makers could go out of business and so can companies that finance auto loans, sell car insurance, and that repair autos.

At the same time, individuals and families may save thousands each year in car insurance, the price of oil could collapse, and cities could lose hundreds of millions in tax revenues; New York, for example, might see tax revenues plunge as much as $500 million.

According to expert Tony Seba, EVs are as much as 90% cheaper to operate than gas-powered cars and they are almost free of maintenance costs. And while a good conventional car might run 150,000 miles, he estimates that an EV will last for 500,000 miles–and possibly much more.

As consumers become increasingly aware of these advantages, sales of EVs are expected to soar. According to CNN, even companies that have never been in the auto business such as Sony and Panasonic are developing them; a long-rumored Apple car could debut as soon as 2024. And in China, nearly 400 companies are working on electric cars, in large part because nearly every Asian country–including China, India, Japan, Taiwan, and South Korea–will soon ban the sale of new gas- and diesel-powered cars.

Driverless EVs are already being used without serious problems, and Google, Tesla, Apple, Audi, Mercedes, KIA, and Ford are just some of the industry powerhouses testing this technology in cities across the US and abroad. ARK Invest says that once Google's driverless cars, called Waymo, expands its fleet to 80,000 vehicles in San Jose, it could address half of the city's travel needs. Meanwhile, related services are being tested in Las Vegas, Boston, Pittsburgh, San Jose, and elsewhere. Tilson says driverless TaaS are incredibly safer than vehicles driven by humans, another factor that will boost their sales.

Maybe Easy, But Not So Simple

These trends might make investing look easy; after all, with so much potential growth, all investors need do is buy anything even remotely involved with EVs. But this approach is overly simplistic and probably a huge mistake–and a look into the past makes this very clear.

In 1929, it had become obvious that cars were the future and dozens of companies were getting into the industry. Among them was Stutz Bearcat, a company that made cars that were both very fast and stylish. But like most of the competition, Stutz ultimately folded. A then-little-known company called General Motors survived the Depression and thrived.

By 1979, GM dominated the auto industry with a 50% share of the market. But the company had plans that were even more ambitious: It wanted to use their $40 billion war chest to knock out all the competition. But those plans failed big time and today GM is essentially just an also-ran, and some industry observers wonder out loud whether it can successfully compete in the long term.

Even if Tilson's scenario is only partially correct, investors will have numerous opportunities to score big wins. But that doesn't mean it will be easy, and they will have to be careful to pick the right electric vehicle stocks and not get shocked in the process.