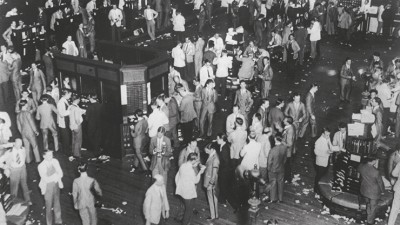 October 29, 1929, was so traumatic, so painful, that nearly a century later it still rattles investors.  Years of unprecedented prosperity, fun, exuberance, and a feeling of invincibility ended abruptly that day. What followed was the unthinkable: fortunes were lost, careers destroyed, families evicted, and hunger became widespread.  The people who experienced these horrors certainly wondered if their suffering would ever end, and for years it seemed that it would not.

For much of the 1920s, Wall Street was a one-way street: Stocks only moved higher.  Business was booming, new cars and homes were selling briskly, and throwing lavish parties had become the norm.

Investors made money “playing” the market, and speculators made hefty profits–often in just a few days and sometimes in just a few hours.  No one doubted that stocks would continue their winning ways, and that every pullback was a new opportunity to buy shares at bargain prices.

More daring (and greedy) people who wanted to make even more money bought stock on margin.  All one had to do was buy shares, and then use those shares as collateral to borrow money and purchase even more shares.  Buying on margin enabled even people of modest means to accumulate a relatively large number of shares.

Buying stock on margin is great when stocks go higher, as profits increase very quickly.  But when stocks fall, losses mount just as rapidly.  Even worse, if the price drops sharply, the investor/speculator could get a margin call from the broker, asking him or her to put up more money.  Those who don’t (or can’t) could suffer terrible losses.

This began happening in September and October of 1929.  In hindsight, the danger signs were evident, but the investors caught up in the thrill of the bull market ignored them.

According to Britannica, “On October 18 the market went into a free fall, and the wild rush to buy stocks gave way to an equally wild rush to sell.”

Much of the decline was attributed to forced margin sales which fueled even more selling.  Nevertheless, “Some major banks and investment companies bought up great blocks of stock in a successful effort to stem the panic that day,” notes Britannica.  At the close of trading, the market was down just six points.  But the bear had just begun to growl, and the following week it came back with a vengeance.

On October 28, “Black Monday,” the market fell 12.8%.  On Black Tuesday, October 29, it fell another 12%.  The market had plunged 183 points in less than two months and almost no stocks escaped the carnage, even the bluest of the blue chips.

Shares in General Electric plunged from 396 on Sept. 3 to 210 on October 29; American Telephone & Telegraph was down 100 points.  DuPont had been as high as 217 in the summer but sunk to 80.  Other blue chips also wilted.  United States Steel dropped from 261 to 166; and shares in Radio Corporation of America (RCA) did even worse: They plunged from 505 to 26.

Well-known and respected politicians and financial gurus–President Hoover and Andrew Mellon notably among them,–tried to reassure the public that Wall Street’s woes were just a temporary setback and that the market and the economy would get back on track very soon.  They emphasized that business remained “fundamentally sound,” and that prosperity was “just around the corner.”  The Dow did in fact rebound in 1930 to 300 but only briefly.  In May it plummeted again and 20 years would pass until the Dow climbed to 200 again.

Of course, there were individuals who made huge profits from the crash. Speculator Jesse Livermore sold short and made an estimated $100 million, a fortune even today and a mind-boggling sum back then.

But Livermore and a few others like him were the exceptions.  Most people suffered terrible losses and overnight became unemployed, were forced to wait in bread lines for handouts, sleep on park benches, and grovel for menial work.  Many speculators who had borrowed money to buy stock not only lost their investments, but were deeply in debt to the banks that loaned them money.  Thousands of banks across the country folded.

The financial losses could be measured in dollars, but there was no way to gauge the emotional suffering, which in many ways was probably even more painful.  The Great Depression had begun, and it took a decade and a World War until America’s economy overcame its problems and got on solid footing again.

Words To The Wise

One would imagine that after all the suffering, society and individuals experienced important lessons from the crash would have been learned and important safeguards implemented to make sure a fiasco like that one could never happen again.

Unfortunately, those lessons were never learned. In fact, some experts are warning that another crash is inevitable and possibly imminent, and they point to numerous similarities between the run-up in the market in the weeks leading up to the crash and the current environment.

For example, as in the late 1920s, inflation has not only increased but is accelerating rapidly; the number of companies completing their IPOs (initial public offerings) jumped sharply, interest rates then, as now, were rising, and there has been a huge increase in the number of inexperienced investors rushing to speculate in the market–the so-called Robinhood investors, who trade wildly inflated stocks, is just one example of this.

Financial writer Maury Klein, author or “Rainbow’s End: The Crash of 1929,” put it this way: “To practiced eyes they represented a new breed of gambler, lured to the market more by hope than experience, like vacationers at a casino trying their luck at a game owned by professionals; suckers are born every minute.”

Unprecedented debt in the US, a worsening financial crisis in China, margin debt at an all-time high, never-before-seen supply chain challenges, soaring energy prices, and rolling blackouts in Asia and Europe are just some of the problems plaguing the market.  And yet, the bull continues its “What, Me Worry?” march to new highs and shrugs off these and other problems.

Is the market sneakily lulling investors into a false sense of security, or is it possible that this time the bull market really is different and it will never end?  More than likely we’ll learn the answer in the very near future.