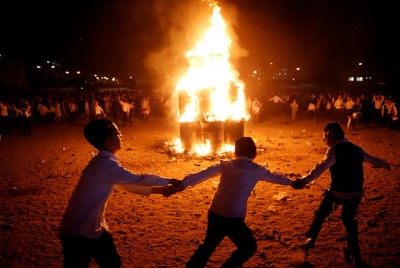 One explanation is that we celebrate the fact that Rabbi Shimon died a natural death, and was not executed by the Roman authorities. A certain person informed the Roman authorities that Rabbi Shimon betrayed them, and they set out to kill the great Rabbi. Rabbi Shimon was forced to flee and miraculously survived for thirteen years inside a cave. He then emerged from the cave and lived to old age. We thus celebrate the fact that he passed away from natural causes and was not killed by the Romans. Others explain based on the comment of the Zohar that on the day when Rabbi Shimon died, his home was filled with the fire of holiness, and a heavenly voice burst forth announcing an invitation to bring this righteous soul to the heavens. The fire that filled Rabbi Shimon’s home is symbolic of the Kabbalah, the esoteric, mystical wisdom of the Torah that, like fire, poses grave danger to those who approach it without taking the proper precautions. (Unfortunately, we see many people today who freely study Kabbalah without adequate preparation and without the seriousness that it demands. They do not recognize that this field of wisdom is like "fire," and must be handled with extreme care.) Thus, we celebrate on Lag Ba’omer – with bonfires – because Rabbi Shimon gave us the "fire" of Kabbalah on that day. The Rama writes, very briefly, that Tachanun is not recited on Lag Ba’omer, as it is a day of festivity. Even though Maran does not include Lag Ba’omer in his list of days on which we recite Yehi Shem instead of Tachanun, Sepharadim have accepted the Rama’s position on this issue. We thus substitute Yehi Shem for Ana both on Lag Ba’omer itself and in Mincha on the afternoon before Lag Ba’omer. Some people have the custom to throw clothing into the bonfires on Lag Ba’omer. This practice commemorates Rabbi Shimon’s miraculous survival in a cave for thirteen years, during which time he did not wear clothes, and instead lived under the ground, with only his head above the earth. Rabbi Shimon during this period reached the stature of Adam before his sin, when he did not need clothing. To commemorate his greatness, many people on Lag Ba’omer throw clothing into the fire, recalling the time when Rabbi Shimon did not need to wear clothing. In Eretz Yisrael, it is customary to visit Rabbi Shimon’s gravesite at Meron (a mountain in Northern Israel) on Lag Ba’omer. Hundreds of stories have been told of people whose prayers at the site were answered on Lag Ba’omer, including women who had been unable to conceive, and ill patients, whose prayers at Meron on Lag Ba’omer brought them the salvation they needed. It is also considered a Segulah ("charm") to purchase beverages for the people who visit Meron on Lag Ba’omer. It is told that the Arizal brought his three-year-old son to Meron on Lag Ba’omer and gave him his first haircut at the gravesite of Rabbi Shimon Bar Yochai. It has thus become customary, following the Arizal’s example, to give children their first haircut when they are three years old on Lag Ba’omer at the gravesite of a Tzaddik, especially of Rabbi Shimon Bar Yochai. In general, the evening of Lag Ba’omer is observed as an occasion of music, celebrations and bonfires. In truth, it is likely that Rabbi Shimon would have preferred that we observe the day of his passing by spending it immersed in Torah learning. Nevertheless, as the famous adage establishes, "Minhag Yisrael Torah" – time-honored tradition has the status of Torah, and it has become customary to observe this day as a day of great festivity and celebration in honor of Rabbi Shimon Bar Yochai.