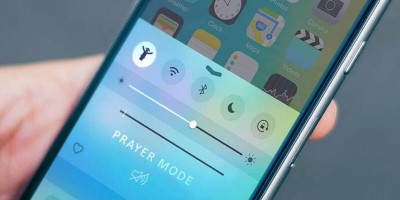 A number of different applications are available providing the entire text of the Siddur of one’s smartphone. Is it permissible to pray using such an application? The Gemara in Masechet Brachot establishes that while praying the Amida, it is forbidden to hold in one’s hand certain objects – such as Tefillin, a Sefer Torah, money, and a knife. We find among the commentators two explanations for this Halacha. Rashi explains that the items mentioned by the Gemara are items which one worries about falling, either because they are sacred items, because they might hurt him if they fall, or because they are expensive items which could break or get ruined if they fall. When holding such an item, one’s mind is preoccupied, ensuring not to drop it, making it very difficult to concentrate, and for this reason, Rashi explains, Halacha forbids holding such items while praying. The Nimukeh Yosef explains differently. In his view, the Gemara chose these examples only because these are common items, and in truth, Halacha forbids holding anything in one’s hand while praying the Amida. The Shulchan Aruch clearly follows Rashi’s view, citing the Gemara’s ruling and then explaining, "…because a person’s mind is on them, so that they do not fall," and this will disrupt one’s concentration during prayer. The Mishna Berura clarifies that according to the Shulchan Aruch, only items which one is worried about protecting, or to ensure that they would not fall on his feet, are included in this Halacha. This would include a baby, who one quite obviously must ensure not to drop, as the Mishna Berura cites from the Chida (Rav Haim David Azulai). The Mishna Berura then notes that some disagree with the Shulchan Aruch, and forbid holding any item during the Amida, referring, of course, to the Nimukeh Yosef’s stringent opinion. The Taz (Rav David Segal) follows the stringent view of the Nimukeh Yosef. At first glance, holding a phone which is worth hundreds of dollars, and which could break if it is dropped, would certainly be forbidden according to both opinions. However, the Shulchan Aruch writes in that same chapter that it is permissible while reciting the Amida to hold a Siddur from which one prays, despite the fact that sacred books are generally forbidden to be held during the Amida. Since the Siddur is held for the purpose of Tefilah, it does not fall under the prohibition. Holding the Siddur serves to enhance one’s ability to pray, rather than compromise his ability to pray, and therefore, this is permissible. This would apply to a smartphone, as well. If one uses the Siddur application on the device, then the device becomes no different from a Siddur, which may be held while reciting the Amida. However, this applies on the condition that one first turns off all notifications, and silences the phone. Needless to say, if the phone rings, or if a notification appears on the screen, even for just a moment, this causes a distraction during prayer. Therefore, one must ensure before praying with a smartphone that he disables all functions which could potentially distract him during the Tefilah, so that the smartphone at that time serves only as a Siddur. Additionally, although it is permissible to pray from a mobile phone, this should not be done unless it is necessary. Rav Gamliel Rabinowitz cites a passage from the Sefer Hasidim warning that one’s prayers are not answered if he prays from a Siddur which was published by a wicked person. Quite obviously, we do not know the people who produced any given mobile device. Although this is not a Halachic consideration which would lead us to forbid the use of a mobile device for praying, it suffices to make it preferable to use a standard Siddur. More importantly, using a mobile phone during prayer compromises the aura of sanctity in the synagogue. There is a certain ambiance of holiness and reverence which must characterize a house of prayer, and this ambiance is diminished, at least to some degree, by the sight of a person looking at his phone. Therefore, while it is Halachically permissible to use such a device for prayer, this should be done only when one has no alternative, when he finds himself in a place without a Siddur and he does not know the prayer text from memory.