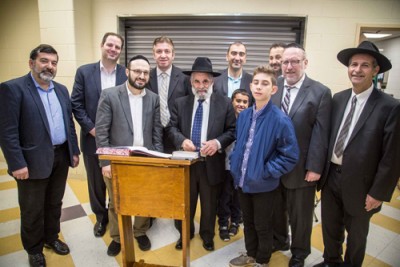 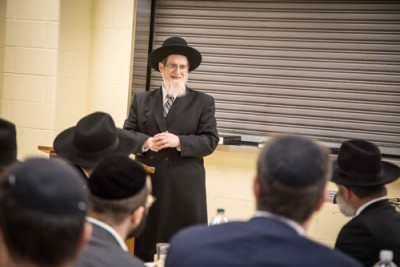 As Klal Yisroel was immersed in the spirit of teshuvah with the commencing of Chodesh Elul and the Yomim Noraim, the Queens Torah community celebrated an evening of inspiration and chizuk. A chaburah of dedicated ba’al habatim, under the guidance of their rebbi, HaRav Haim Alcabes, Mara D’asrah of the Mekor Habrachah Congregation in Kew Gardens Hills, recently marked their completion of Meseches Baba Kama with a moving siyum seudah. The siyum was dedicated to the memory of Rav Alcabes’ rebbi and mentor, HaRav Zecharia Mines, zt”l. Rav Mines, over many decades, learned Torah with his beloved talmidim at a table in the Chofetz Chaim Bais Medresh. After Rav Mines’ petirah, Rav Alcabes gathered a group of his mispallelim and followed in his rebbi’s footsteps to learn together at the same table. The siyum marks the second mesechtah they have completed. Three and half years ago, they completed Meseches Gittin, learning with the same dedication and devotion that Rav Alcabes acquired from his rebbi’s exemplary example. The occasion was also highlighted by the beginning of the next mesechtah the chaburah will be learning: Baba Metziah.

Rav Alcabes set the tone for the evening in his introductory remarks. Noting that it was the Yahrtzeit of the Ben Ish Hai, he explained a Chazal from his writings. The Ben Ish Chai emphasizes that although women do not have the mitzvah of Talmud Torah, when they enable their husbands and sons to learn they become equal partners in this elevated mitzvah. The great sacrifices the wives of the misaymim undertake, when they joyfully encourage their husbands to go out to learn during Shabbat and every evening, entitles them to a role of honor at the siyum. Rav Alcabes shared a wonderful and insightful memory of his Rebbi, Rav Mines, zt”l.  He recalled that Rav Mines never told a student that he was wrong; he would always validate the student and then gently guide him to the correct p’shat. This was a reflection of his immense kavod ha’adam that he exhibited, not only to his cherished talmidim, but to everyone he encountered.

Rav Alcabes then introduced Rabbi Asher Mandel, son-in-law of Rav Mines, to be honored with the siyum of the mesechta. Rabbi Mandel expressed the appreciation of the Mines family to Rav Alcabes for perpetuating his father-in-law’s life, by emulating and personifying the midos that were the hallmarks of Rav Mines. He noted what a great z’chus it is for Rav Mines to have a talmid such as Rav Alcabes, who has continued his avodas hakodesh in harbatzas hatorah with the same love and patience for which Rav Mines was famous. Rabbi Mandel then proceeded to be misayaim the mesechtah.  This was followed by a gathering of all the members of the chaburah, who recited together a moving hadran, led by Mr. Amnon Fayziyev, who has been a talmid of Rav Alcabes for over 15 years. Mr. Fayziyev expressed hakaras hatov to Rav Alcabes for his dedication to the chaburah, and to the wives for assuming so many extra responsibilities at home to enable their husbands to go out and learn. Immediately upon the completion of Baba Kama, the chaburah honored Rabbi Yehoshua Weiss, a son-in-law of Rav Mines, to begin the new mesechtah of Baba Metziyah. In beginning Meseches Baba Metziyah, Rabbi Weiss emphasized the importance of learning the laws of nesikin in order that we are able to properly conduct our business dealings with honesty and according to the laws of the Torah.

Perhaps the highlight of the evening was the words of chizuk from the Rosh Yeshiva, HaRav Grunblatt, Shlita. He noted that Baba Kamma concludes with the dinim of hakpada. Rav Grunblatt emphasized the importance of the midah of “giving in,” of being “ma’avir al midosov.” If we are not makpid upon others, then, measure for measure, Hashem will likewise not be so strict with us and will shower us with his compassion and forgiveness, a theme most appropriate for these y’mai hadin. The Rosh Yeshiva stated that this was the prime midah of Rav Mines, zt”l. He was ultimate “ma’avir al midosov.” He quoted a targum from Koheles that connects being satisfied with what you have with the joy of learning Torah. When a person fills his life with the joy of Torah learning, he needs nothing else. This was Rav Mines: His love of Torah was so great, he was mivatair on everything else. This is meaning of the pasuk in Tehillim, “Pekuday Hashem misamchai lev,” the commandments of Hashem gladden the heart.

The final speaker of the evening, representing the entire chaburah, was Dr. Khaimov. He thanked Rav Alcabes for his dedication to the group and for the great enthusiasm and love he puts into their learning. He pointed out that even though most of the chaburah never met Rav Mines personally, they feel as if they know him through his talmid, Rav Alcabes. He marveled how everything that was said about Rav Mines by the previous speakers can be applied to Rav Alcabes as well. He described how in the chaburah, it was not enough just to read or memorize the words of the Gemara, but that the key was to understand it. The chaburah would never turn the page until everything was thoroughly understood. Another insight that Dr. Khaimov shared was the impact his learning has on the children. He was so appreciative that they also attended the siyum so they could witness the special role Torah learning plays in his life. In conclusion, he mentioned the many practical lessons that were derived from studying Baba Kama - lessons in the importance of honesty in business and being careful of chilul Hashem, halachos that unfortunately are very often overlooked even by religious Jews. He also found in Meseches Baba Kama words of wisdom that have provided guidance in his own medical practice.

The evening was surely one of great inspiration, a true celebration of the simcha of Torah, and a wonderful way to usher in the chagim of Tishrei. The chaburah looks forward to many more  siyumim in the future.