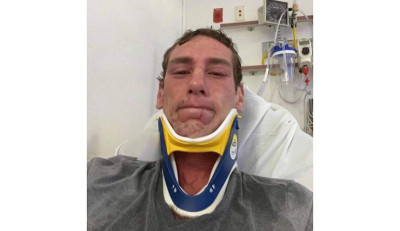 In District Attorney Alvin Bragg’s New York City, if someone fits the right intersectional qualifications, that person can mercilessly beat a Jew in Midtown Manhattan, proclaim he would do it again, and get offered a six-month jail sentence when he was facing up to seven years.

The beating took place near a pro-Israel rally that occurred in May of 2021, when there was greater-than-normal conflict between Israel and Gaza. As per the New York Post at the time, “Joseph Borgen, 29, an accountant from the Upper East Side, said he was walking to the rally when multiple people ganged up on him on Broadway near West 49th Street.

“There was a rally at this location last week, which I had gone to,” Borgen told the Post. “I wore a yarmulke last week, and nothing big happened. I showed up for the same rally this week. I got off the subway at 6:30 and started walking to the rally, and before I could even make it to the rally, a few blocks away, a guy started chasing me.”

“I tried to get away, and the next thing I knew, I was surrounded by a whole crowd of people who proceeded to kick me, punch me, beat me down,” he recalled. “I felt a liquid being poured on my face and, at first, I thought I was getting urinated on, but it turned out I was getting maced and pepper-sprayed. My face was on fire. That pain was worse than the concussion and all this other stuff that followed.”

Waseem Awawdeh, who was wearing a “Palestine” t-shirt during his perp walk with a picture of the Land of Israel combined with the territories known as Gaza and The West Bank (a clear sign that he views true Palestine as “from the river to the sea”), told his jailers, “If I could do it again, I would do it again,” according to prosecutors. “I have no problem doing it again.”

This man has been out on $10,000 bail since the attack, so it’s not like there’s “time served.” The New York Sun broke the story. “The [Manhattan district attorney’s] office confirmed to The Sun that it has offered a plea deal to Waseem Awawdeh that would land him in jail for just six months for his alleged role in the assault of Joseph Borgen. The deal would give Mr. Awawdeh a six-month prison stay in exchange for a guilty plea on charges of second-degree attempted assault with hate motives.”

The only way this offer makes sense is if the District Attorney believes that the alleged attacker is not actually guilty of the crime or cannot prove in a court of law that the alleged attacker is guilty. As Borgen claimed, “multiple people” ganged up on him to commit the brutal assault. Four suspects were arrested, two are going to trial, and two received plea deals.

The reason this is so infuriating, aside from the miscarriage of justice of a man charged with a Class D felony (3-7-year sentence, if found guilty) and a hate crime (up to ten years, if found guilty), is that Awawdeh was literally the poster child for anti-Jewish assault in the name of Palestinian grievance.

Footage of the assault on social media showed Awawdeh beating Borgen with a crutch. When he was released on bail, Awawdeh was carried on the shoulder of a cheering crowd waving that same crutch, being handed a cigarette victoriously for being released. We always hear cases where a prosecutor wants to “make an example” of a suspect as a deterrent for future actions by others; this is a textbook case for that.

The word will get around the community that is willing to commit violence against Jews that they have a friend in the DA’s office – if it hasn’t already. This man beats an innocent Jew on camera, announces he would do it again to jailers, celebrates his release and is hailed as a hero on camera, and is given a six-month plea deal? Imagine what’s said in private, not on camera: how to get away with assault, which lawyers to hire, what to say to prosecutors. This will become part of a playbook. That playbook will be passed around from assailant to assailant, and Jewish blood will become cheaper.

There’s no pretending that this community does not exist. This past weekend, a group of students at the University of Michigan marched around campus waving Palestinian flags and chanting for the destruction of Jews. They repeated phrases like, “Intifada, intifada, long live the intifada,” “There is only one solution: intifada revolution,” and “from the river to the sea, Palestine will be free.” They are not hiding or whispering. They are in plain sight and shouting their intentions: the land currently known as Israel to be devoid of all Jews and renamed Palestine. A second Holocaust.

This plea deal has sounded the alarm for multiple politicians and organizations who correctly see the offer as a slap in the face of the Jewish community. New York City Councilmember James Gennaro called on Governor Kathy Hochul to remove Bragg over this. “We have a District Attorney who essentially condones violence against Jewish New Yorkers,” he said in a statement. “This is an abomination.” The Queens Jewish Community Council put out a statement blasting Bragg, as well. “So, DA Bragg, you will have blood on your hands if this anti-Semite goes through with his pledge to ‘do it again,’” they said. “New York has faced a 41% rise in anti-Semitic crimes in 2022. We wonder what if this were an Asian or Black that was attacked, would you be so lenient?”

What should people do, as they cannot look to the District Attorney’s office for justice, they cannot look to the Governor’s office for more reasonable policies, and the mayor is nowhere to be found on these issues? If Kathy Hochul and the Democrats want to stop the flow of people escaping the state, they need to send a message to criminals that this is not a free-for-all. Sweetheart deals to criminals must stop now, or this will ultimately get worse.