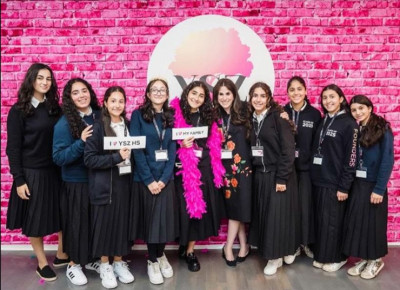 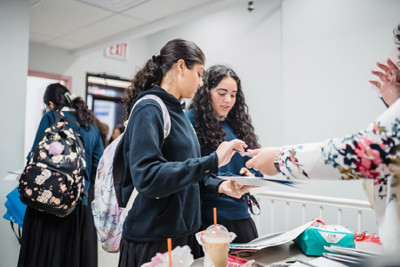 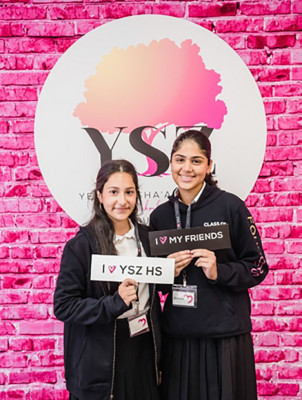 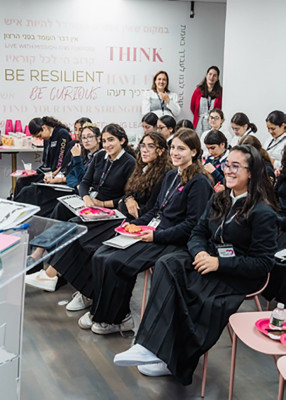 There’s nothing quite like the first day of school. At YSZ High School for Girl’s Student Orientation on Tuesday, September 6th, the excitement in the air was palpable to students and faculty alike. Mrs. Zerykier, along with the faculty, created a warm, encouraging and inspiring environment.

With balloons lining the hall, colorful posters adorning the walls, and upbeat music playing throughout the school, freshmen and sophomores were greeted by faculty as they walked through the doors. There was a wonderful energy in the room as sophomores were reunited with their friends, and freshmen met their classmates for the first time. Students were then led to a fun photo booth where they posed with colorful feather boas and crowns and held uplifting and positive messages reflecting what it means to be a YSZ HS for Girls student. With having a freshman and sophomore class this year, it allows the wonderful opportunity for mentorship and friendship between both grades. The Big Sister Kickoff was then introduced where students understood that the bonds formed in high school can last a lifetime.

To introduce what the day and year is truly about, Mrs. Zerykier and Rabbi Benhaim gave opening remarks in the Student Center. Mrs. Zerykier spoke about the educational philosophy of teaching from “Head to Heart.” She brought home the point that when students bring their heart to every aspect of their lives, growth and success can occur both academically and spiritually. Rabbi Ben Haim continued and reminded students that the YSZ HS for Girls student body and faculty are a family and the school building is their home. Wherever they go, even if they are apart, they will always have a piece of each other in their hearts.

After opening remarks, freshmen and sophomores broke into different activities where they were challenged to think critically and creatively. Freshmen participated in a balloon challenge which enabled them to think on the spot and work as a team. They also discussed different hopes and aspirations they would like to work on for this year. As the upperclassmen, sophomores worked on creating leadership goals and participated in a puzzle challenge that worked on building good communication skills.

Before the day concluded, the entire school came together to reflect on the wonderful day that was spent together. With their chairs arranged in a circle, students were asked to pick one idea they learned and one aspect they were excited about for the upcoming year. Ideas such as time management, fostering an inclusive community, and working on study skills were all discussed. Students of course also mentioned how much they look forward to all the amazing learning, programming, and trips planned for the year. Many students shared how excited they are about freshman retreat next week. Leanna Kataev and Leah Zavlyanov, both sophomores, stated how organized and inspiring the day was. Student Orientation was the perfect way to begin what is sure to be a spectacular and growth-filled year for the students at YSZ HS for Girls!