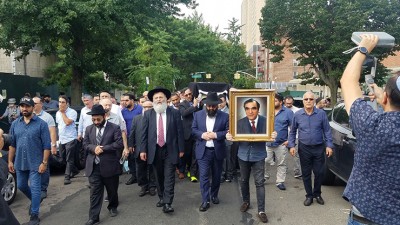 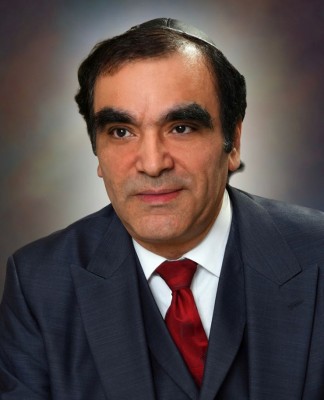 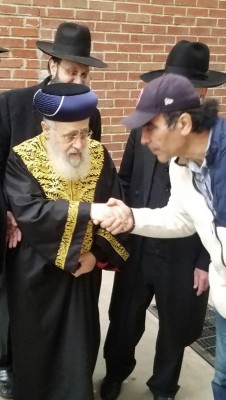 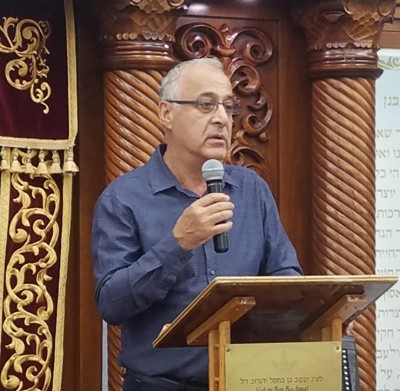 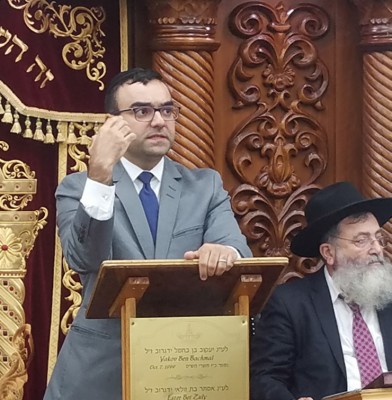 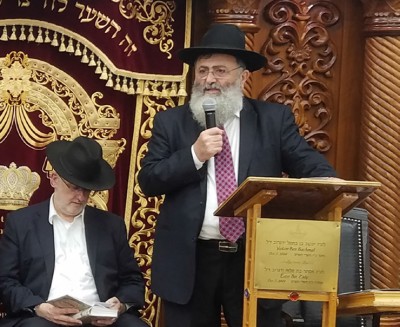 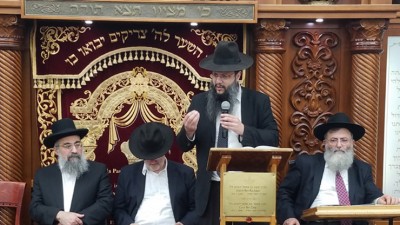 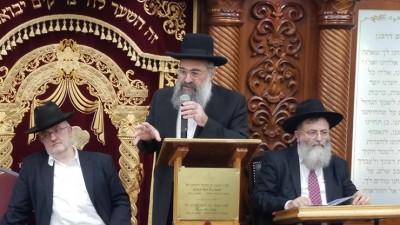 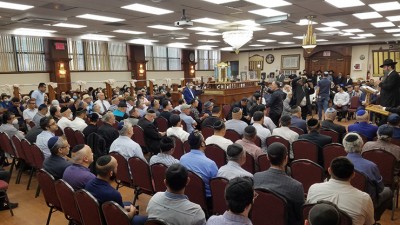 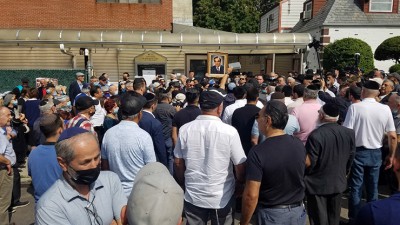 The loss of Boris Bechor Baruch Mordukhaev, a”h, 61, is tremendous. The loss of Mr. Mordukhaev to the Beth Gavriel Community Center is heartbreaking. The loss of the mentch known to many in the Bukharian community simply as Boris is painful.

Boris was a loving son, husband, father, and grandfather that immigrated to the United States to give his family new opportunities and a broader chance at success. Together with his wife, Svetlana (Svetochka), they built a wonderful family of dedicated servants to Hashem. Their children, David and Ilya (Eli) have made remarkable strides in their own respective Queens neighborhoods as leaders advancing the cause of the Jewish and Bukharian communities. Boris was a humble gentleman who acted with respect, and never passed up an opportunity to engage his community neighbors in a friendly exchange.

At Beth Gavriel, Boris took on a larger-than-life role. Known as the building manager, Boris did much more as he took on his role with a unique passion of sanctifying Hashem’s name. Awarded the title for Gemilut Chasadim at his shul, Boris fulfilled this role to the umpteenth degree. Boris and his family first stepped into the shul in 1996 and soon became involved in every aspect of its functioning from its security, to its cleanliness, and the mundane – the placement of its hundreds of tables and chairs. Boris took on each of these tasks with a special fervor. There was no greater perfectionist in the beautification of the Beth Gavriel sanctuary than Mr. Mordukhaev. He assisted with the needs of the Beth Gavriel Mikvah (Be’er Miriam Veh Yaffa), the coordination of its food pantry in conjunction with Met Council on Jewish Poverty, logistics with its in-house boys’ high school, Yeshiva Tiferet Tzion, the continued construction of the synagogue’s new wing, and the daily ongoings of the shul’s general maintenance. Boris was a regular presence within Beth Gavriel that will surely be missed.

At the shul, Boris regularly interacted with the rabbinical staff and presidium. Boris was often on hand to organize meeting spaces for rabbinical gatherings and prepared food and drink for the rabbis to partake. Rabbi Emanuel Shimonov, Rabbi Israel Itshakov, Rabbi Yitzchak Yisraeli, Rabbi Ilan Meirov, and Rabbi Moshe Muratov each interacted with Mr. Mordukhaev and benefitted from his assistance. With a warm and gracious heart, Boris also bid the calling of the shul’s president Ilya Koptiev and Vice-President Simkha Elishayev. Fulfilling their collective wishes and sanctifying their house of worship brought peace to Mr. Mordukhaev.

Rabbi Yitzchak Yisraeli, Chief Rabbi of the USA and Canada said at the levayah, “Boris’ destination was to be in the management business.” The rav explained how unlike others who work all day and night fixing buildings, Boris was privileged to take on this role in the embassy of Hashem where he was always under the protection of the Divine presence. “Every second of his day was a mitzvah.” The rav added, “His blood, his energy is in this house.” The rav encouraged all to look around the facility at walls, floor, ceiling, and on each floor where you see his impact. Rabbi Yisraeli related that several years ago ahead of Rosh Hashanah Boris repainted the railings. When asked why he took on this task that appeared unnecessary, Boris replied, “I want the house of Hashem to look even better and even nicer.” This was the nature of Boris, to bring luxury into Beth Gavriel. Rav Yisraeli also shed light on the dedication that Boris took to clear a drainage issue with the water channel in the shul’s mikvah. “He was like an engineer coming up with plans and ideas on how to fix the issue and then went on to do the hard work and the dirty work until the issue cleared.” It took tens of times and Boris did it all this difficult labor with a joy of accomplishing a mission of building the foundation of the next generation of the Bukharian community.

“Every time when I would through the doors of Beth Gavriel, and I would bump into Boris, a”h, he would always scream, ‘Rabbeinu, rabbeinu, come over here,’” explained Rabbi Ilan Meirov, Director of Chazaq at the levayah. Rabbi Meirov related how Boris would offer him food from the food pantry stock to share with his family and the needy of the community. “When I would say that it was okay and I did not need food for others, Boris would look at me and say, ‘What do you mean, you are a rabbi you have to look for people who need.’” Rabbi Meirov related a character trait of Boris’ that many have come to know over the years. Boris would never give in. In Rabbi Meirov’s case, each time the rav left the building, there would be a food parcel inside to distribute to the less fortunate. Notions like this and his desire to have other share in the mitzvah of chesed exemplified the sensitivity of Boris and how he thought of others.

Above all, Boris had an appreciation for the beit haknesses unlike any other. In one instance, Boris was once given the opportunity to speak with the male teenagers who attend afternoon classes at Beth Gavriel and explained how one should treat their shul. “This is the house of Hashem, there is no such thing as leaving the tables dirty,” he explained. These boys had the tendency to leave a mess after finishing their meals. To Boris the concept of derech eretz kadma l’Torah usurped all and making a kiddush Hashem and respecting the makom Torah as Hashem’s house was his priority.

Rabbi Moshe Aharonov, menhael of Yeshiva Tiferet Tzion High School, a division of Beth Gavriel joined the levayah along with his yeshivah bochurim. “Boris always made sure that the boys were learning Torah in a comfortable and peaceful way.” The rav encouraged the mourners to adopt the ways of Boris as a merit to elevate his departed soul.

Daily, Boris was readily available to assist Rabbi Malkiel Yusupov who works on the administrative functions of the shul and Batya Babayev, the shul’s secretary.

“Boris was a true friend,” said Mrs. Babayev. “He taught me the way of life, how to be strong, and not to fall into life’s obstacles.” Regarding Beth Gavriel, Babayev added, “He had a regular presence in my office. Boris was supportive on Beth Gavriel’s mission in every way. He dedicated his time to the building and did his utmost to save money for the shul where he could.”

Mr. Simcha Musheyev a dedicated board member of Beth Gavriel and close friend of Mr. Mordukhaev spoke with the Bukharian Jewish Link, “Whatever we needed in Beth Gavriel, Boris got it done, no questions asked.” Boris epitomized the well-known Russian phrase “im em’aish” – you got it. “Boris was a doer who conducted his holy work in a structured manner and never left a mess. To Boris a promise made was a promise kept and delivered.” There were always small details that needed attention at the building. “Boris could both be counted upon to fulfill a task that he agreed to undertake. We will miss his humor and will feel his impact always.”

I was privileged to have witnessed on many an occasion Mr. Mordukhaev’s efforts to keep an orderly and organized shul. Boris understood the importance of the many hundreds of events that his shul hosted and their wide-ranging impact on the community. Having had a hand in spearheading some of these events in conjunction with the renown Chazaq Organization, I was able to work in tandem with Chazaq’s events coordinator, Robbie Aboff, and Boris himself as together we disassembled and reassembled the various meeting spaces of the shul for the different functions. Boris’s hands-on approach was what set him apart. Over the past four months, Boris was seldom seen at the Beth Gavriel facility as his medical condition became difficult to grasp. However, ahead of the widely popular annual Tisha B’Av programming, that fell on Motza’ei Shabbat this year, Boris was on hand to guide the custodial crew on the laws and practices of the day. In a similar vein, over the last number of months, Boris took upon himself to come by the Beth Gavriel campus late at night to lend a hand at keeping daily functions orderly. Such was his devotion to the shul since his very first day.

Shortly after his passing, two simultaneous Chazaq-inspired lectures were underway on the main and second floors of the shul. In a fitting tribute, that even Boris would approve of, both were dedicated in his blessed memory.

At the levayah, his son Ilya encompassed his father’s life in the line, “He forgone his dreams in order to facilitate ours, meaning that he came to America for his children.” Instead of pursuing his career from Russia, he drove a taxi to bring in immediate funds to his family and help his children realize their dreams including doing all he could to ensure that his sons received a proper yeshivah education. Ilya explained that his parents opted to pursue the dreams of their children in place of fancy houses and cars. Ilya recalled repaying this debt to his father by making him the first person he told of his acceptance to law school. Such was their relationship, one that quickly became more friendly than that of a typical father and son. “I did my law exam because of your sacrifices for me, and you were there with me during that time,” Ilya once told his dad who always put his family first.

Boris’ love for his Bukharian people also knew no bounds. He would expend every energy to better the lives of his community members. This was a trait that he passed down to his sons in their communal work. At the funeral, moving words were delivered to the Russian-speaking audience by Rabbi Emanuel Shimonov, mara d’atra of Beth Gavriel, Rabbi David Akilov, and Mr. Ilya Koptiev, Beth Gavriel’s president. Mr. Mordukhaev who is survived by his mother, sister, brother, wife, two sons, and grandchildren was laid to rest this past Monday, August 30, following services at the shul he came to know and love, Beth Gavriel. Generally, hespedim are not conducted in a shul, but because the shul owed Boris, an exception was made.