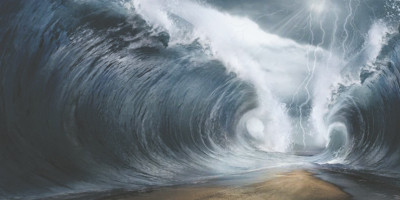 Imagine leaving the exile of Mitzrayim with Klal Yisrael. You have just witnessed the miracles of Yetziat Mitzrayim (the Exodus from Egypt) and are now traveling toward Har Sinai, ready to receive the Torah. In between, however, lies an extraordinary event: Kriat Yam Suf — the splitting of the Red Sea (or Sea of Reeds). One can ask, though, why Kriat Yam Suf was even necessary. Why couldn’t the Jews go straight from the spiritual high and miracles of Yetziat Mitzrayim to the experience of Matan Torah (receiving the Torah)? Why did they first have to pass through the sea? This question is strengthened by the commentators who point out that this journey through the Yam Suf appears to be pointless. After all, Chazal explain that Klal Yisrael exited on the very same side of the Yam Suf that they entered! If Hashem simply wanted to destroy the Egyptians, there were easier ways to accomplish this. What was the purpose of such a journey?

The commentators explain that Kriat Yam Suf was in fact a necessary step before the Jews could receive the Torah, but their reasoning is enigmatic. They emphasize the need for the Jewish People to pass through the waters of the Yam Suf in order to be prepared and capable of receiving the Torah. The question we must then ask is: what is the significance of water, especially in regards to the Jewish People’s journey from Mitzrayim to Har Sinai?

The Maharal explains that Yetziat Mitzrayim was not merely a physical process, in which the Jewish People departed from the land of Egypt and traveled to a different physical location. It was a spiritual metamorphosis — an existential transition, the birth of a people. Prior to leaving Mitzrayim, Benei Yisrael were a collective of individuals, but upon leaving, we became a nation, a single people, a unified whole. (Maharal, Gevuros Hashem, chap. 55)

Water as the Medium of Creation

The Maharal explains that the fundamental nature of water lies in the fact that it is formless. Water has no independent form of its own; it adopts the shape of its container. The ocean is completely formless, and unlike dry land, it has no pathways or landmarks. This attribute of water reflects its essence. Water represents the initial stage in every creative process. Before something becomes expressed and takes on form, it exists in a formless, amorphous state. Through the creative process, physical form emerges from this intangible, formless root. This is why the Torah states that during the creation of the world, there was initially only water. Only afterwards did dry land emerge from the water.

This theme of water as the medium of creation is also prominent in Parsha Noach, when the mabul covered the world with water. The deep secret behind the flood is that Hashem was not destroying the world, He was recreating it. The Dor Ha’Mabul became so corrupted that Hashem decided to start over with Noach alone. Hashem therefore immersed the world in water so that it could return to its primordial state of formlessness and void. Only once it reverted back to its original state could the dry land once again emerge from the waters, recreated and reformed. And only once the dry land emerged, and the world was birthed once more, could Noach leave the teivah.

This deep nature and purpose of water also explains why we are surrounded by amniotic fluids while we are in the womb. Just as during creation, the physical world of form emerged from formless water, each of us has our own creation story, and therefore, we each emerge from our own waters; our birth is like the birth of a new world (Sanhedrin 37a).

As we previously discussed, while we were in the womb, a malach taught us kol HaTorah kulah (Niddah 30b). As the Vilna Gaon explains, this refers to the deepest realms of Torah, a transcendent Torah that lies far beyond this world, beyond the confines of space and time. This Torah is the very root of reality, and we are granted complete understanding of its every detail. Not only were you shown this level of Torah, but you learned your specific share of Torah; you were shown your unique purpose in the world and how your unique role fits into the larger scheme of the human story as a whole. You were given a taste of your own perfection, of what you could, should, and hopefully will become. And from this transcendent realm, you were birthed into the physical world, emerging from these formless waters with the mission to give form and actualize everything you were shown in the womb.

Equally important, this process of recreation and rebirth allowed Klal Yisrael to go through a transformational metamorphosis, leaving behind the shackles of their slave mentality. When they emerged from the waters of the Yam Suf, they were elevated to a state where they were now both capable and ready to receive the Torah, accepting and embracing their lofty mission in this world. Let us now delve a bit deeper into the birth of the Jewish People and show how Yetziat Mitzrayim encapsulates this principle.

Before the Jewish People could receive the Torah, they had to be reborn, recreated with a new identity both as individuals and as a nation. The Ramban constantly emphasizes how we must never forget the experience of Matan Torah. In a deeper sense, whenever we read about, remember, or think about the Jewish People receiving the Torah, we must realize that we are not simply supposed to be remembering what happened thousands of years ago, we are supposed to be re-experiencing this transformative event ourselves on an entirely new level. Every day, we must go through our very own Kriat Yam Suf, our own process of self-transformation and rebirth, so that we can accept the Torah with the utmost desire and commitment.

Every day, we get to choose who we are, what we believe in, and how we are going to live our lives. Each morning, we get to create our identity. We are never stuck in the patterns of our past; each day we begin anew. We must look deep within ourselves and recreate ourselves for the better, taking our lives to the next level of spiritual growth. We can’t continue living the same way simply because it’s comfortable or because we’re used to it. We must challenge ourselves daily, constantly pushing ourselves to become the very best we can be. May we each be inspired to undergo a genuine rebirth in our own personal lives, develop a more empowering identity, and prepare ourselves to accept the Torah on an even deeper, more genuine level.

Rabbi Shmuel Reichman is the bestselling author of “The Journey to Your Ultimate Self,” which serves as an inspiring gateway into deeper Jewish thought. As an educator and keynote speaker, he has lectured internationally on topics of Torah thought, psychology, and leadership. He is also the founder and CEO of Self-Mastery Academy. After obtaining his BA from Yeshiva University, he received Semicha from RIETS, a master’s degree in education from Azrieli, and a master’s degree in Jewish Thought from Bernard Revel. He then spent a year studying at Harvard as an Ivy Plus Scholar. He currently lives in Chicago with his wife and son where he is pursuing a PhD at the University of Chicago. To invite Rabbi Reichman to speak in your community or to enjoy more of his deep and inspiring content, visit his website: www.ShmuelReichman.com