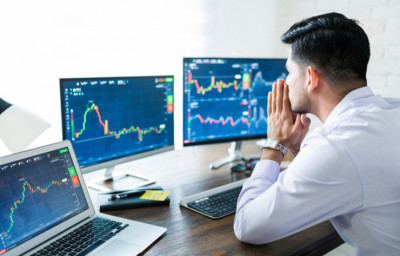 Investors with a long-term horizon don’t worry about the day-to-day market moves; only the long-term matters to them. Day traders, on the other hand, hang on every twist and turn in stock prices. They try to make a quick profit and move on to the next trade. They love volatility and, fortunately for them, there’s been plenty of that lately.

Look at stocks. The Dow made its all-time high of 37,000 at the beginning of the year, then dropped 20%. Over the summer it recouped 58% of the loss but appears to be heading lower again.

Stocks have plenty of company. For a long time, gold had support at the $1800 level, but after five consecutive months of declines – the longest losing streak in four years – it dropped to $1700. In March, silver was above $26/ounce – now it’s at a two-year low of $17.50.

Oil too has been up, down and all around, rising from $77/barrel at the beginning of January to a multi-year high of $120; now it’s in the $87 range. Interest rates are soaring. Cryptos have been the most volatile of all; the group collapsed, generating losses over one trillion dollars.

Despite these sharp declines, long-term players could still make lots of profit. In the interim, some skillful and lucky day traders have been raking in profits hand over fist by buying and selling; others learned a painful lesson about how hard it is to be a day trader.

Following are experiences some would-be day traders have had. Their names have been changed to respect their privacy, but the events are real.

Ben had a prestigious job and high-paying job – enough to cover his expenses and have money left over, which he promptly put into the market. Always a good stock picker, trading was becoming a very lucrative sideline. “Nothing is like trading,” he said, and hoped it would become his full-time job.

Ben should have been grateful for his blessings, but every profitable trade simply whetted his appetite for more. Each day he began devoting more time to the market, searching for stocks making new highs and buying heavily. Unfortunately, this came at the expense of his job performance, which had deteriorated noticeably, a fact that should have been obvious to Ben but wasn’t until a manager made that point bluntly.

Curiously, along the way, Ben’s trading acumen also deteriorated. Profitable trades made so frequently just a few weeks before morphed into losses. Ben made nearly three hundred trades in just a few months. A few were very profitable, but most generated small losses and a few losses that were not so small.

Despite all the time and effort he “invested,” he lost money, his once-good standing at work was ruined, and his enthusiasm for his job and the market gone. True, Ben scored with a few jabs. But when the bout ended, the market was the winner by a TKO.

Richie had a somewhat similar approach to beating the market. He searched for industries moving into favor, followed the strongest stocks in those groups, and waited for them to pull back; then he bought on the dip.

Many of those stocks continued to trend higher, enabling him to make quick and frequent profits. This strategy yielded many winners – none spectacular, but hitting lots of singles and doubles was driving in runs. Richie became so sure that he could beat the market that he gave up his job to trade full time.

The party was great while it lasted, but a sharp downturn in the market changed the game, and in the new normal his strategy stopped working; there were no profitable trades to speak of. Worse, Richie’s cash reserves were dropping fast, and withdrawing money he needed to live on accelerated the decline. He borrowed money from relatives and friends to help weather the crisis, but those were just a bandage on a very raw wound.

Trading every day had become more than stressful – it was agony – and he began suffering from digestive ailments and back pain; at night he couldn’t fall asleep and in the morning lacked energy to start the day. With his physical and emotional well-being clearly deteriorating Richie threw in the towel and asked his former employer for his old job.

Richie was fortunate because he was rehired. Also, he had loyal friends who continued to help. It took almost a year to regain his health and repay his loans – a year that seemed like it would never end. These days he has no investments and intends to keep it that way.

For Better Or Worse

Like others eager to trade full time, Daniel was hooked on the market, but there was a difference: he was a newlywed, filled with dreams and still on a high from his wedding. Armed with his own savings, those of his bride, and wedding gifts, he was eager to do combat with the market.

Daniel had prepared carefully for this day by making numerous paper trades, learning important lessons about both the market and himself.

When making paper trades he was very aggressive and did quite well. But reality was very different, as he hesitated to risk money that had been so difficult to accumulate and that was supposed to be a cushion for a lifetime.

Daniel began second guessing himself, hesitated to make risky trades, and found it increasingly difficult to make decisions. His dreams of becoming a great day trader were elusive and left him frustrated, depressed, and too embarrassed to explain the situation to his wife. Daniel ultimately concluded that full-time trading was not for him, but by that point it was an expensive lesson.

Although these individuals were in very different stages of their lives, one thing they shared is being unprepared for the intense emotional battle traders have to wage each day – not only with the market but with themselves. Maybe dealing with intense emotional swings is what makes full-time trading so difficult, and not the complexities of stocks and markets.

There’s a huge bucket of gold for those traders who can ride this bronco. Unfortunately, only a small percentage of us can hold on for the ride.