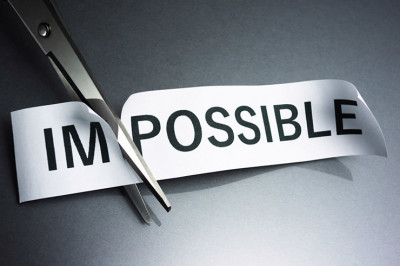 Imagine a teenager lying on a grassy field, gazing into the night sky. As he stares up at the stars, he thinks to himself, “Look at how enormous the universe is. The sky just expands endlessly... It must go on forever.” After sitting with that thought for a few moments, he becomes uncomfortable. “How can anything go on forever? Everything must stop eventually.” But after a few moments of relaxation, his thoughts intrude again. “But how can the universe stop? What exists on the other side when the universe ends? It must go on forever...” And this inner dialogue continues as he struggles to contemplate the infinite within his finite mind. This struggle is not a childish one; it is a challenge that confronts any finite being who tries to connect to the infinite.

Younger children, however, do not face this struggle. They are dreamers, living in a world of fantasy where anything is possible. Just ask a group of children what they want to be when they grow up, and you’ll get some of the most fantastic, unrealistic responses imaginable. “I’m going to be an astronaut fireman, so that I can save people on the moon,” or “I’m going to become a great tzaddik and learn how to speak every language so that I can teach Torah to everyone.” Children live within the infinite, the realm of endless possibility. However, as we grow up, we begin to experience the struggle of reality, where our notions of the infinite start being challenged. We then face the question: How do we, as physical and limited beings, transcend our finite dimensions? How do we relate to the abstract, to the infinite, to the spiritual? Let us approach this question through the lens of Sefirat Ha’omer, the counting of the Omer.

We are commanded to count the days between Pesach and Shavuot, a period known as Sefirat Ha’omer. At first glance, this can be understood on a very simple level: As we approach Shavuot, we excitedly count down to Matan Torah as we anticipate our acceptance of the Torah. This can be compared to a countdown toward a wedding, a vacation, or some other exciting event. However, there is a feature of the Sefirat Ha’omer count that is markedly different: Rather than counting down toward the destination, Shavuot, we count up from the starting point, Pesach. We don’t mark how many days remain until Shavuot; we count how many days have elapsed since Pesach. What is the meaning behind this strange method of counting? And more generally, what is the purpose of counting in the first place? By no other holidays do we count the days between them; we don’t count the days between Sukkot and Chanukah. Why then do we specifically count the days between Pesach and Shavuot?

In truth, we are not counting down to Matan Torah, but rather are building toward it, ascending one day at a time. We do not wait for Shavuot to arrive; we actively bring it ourselves through the time and effort we invest as we count the Omer. If Shavuot — and its accompanying Matan Torah — are a skyscraper, each day of the Omer is a brick. Each day we place the next brick in our building, and each day we build ourselves one step higher. The extensive halachic emphasis on counting each and every day of the Omer highlights the fact that every single brick is essential and that every single day is fundamental. If while building a staircase you miss one step, you simply cannot build the next step up. Each step requires a foundation to rest on. The same is true of counting the Omer. Each day builds upon the previous ones, ascending toward our ultimate destination. Matan Torah does not come after forty-nine days, it comes because of them, built by our effort and investment during Sefirat Ha’omer. This is why we count up. We are not counting down to Matan Torah; we are building up toward it, one day at a time.

This elucidation of Sefirat Ha’omer sheds light on the Ramban’s enigmatic approach to the counting of the Omer. He maintains that women are obligated to count the Omer because it is not a mitzvas Asei She’hazman grama — a time-bound commandment. How are we to understand this? Sefirat Ha’omer, the counting of each specific day between Pesach and Shavuot, seems to be the epitome of a time-bound mitzvah!

However, a deeper understanding of Sefirat Ha’omer clarifies the Ramban’s opinion. In general, a time-bound mitzvah is an opportunity to tap into a certain power of time that exists at that moment. On Pesach, when we eat matzoh, we tap into the power of freedom, a pre-existing reality. This same principle applies to all time-bound mitzvos. For Sefirat Ha’omer, however, we don’t tap into a pre-existing time; we create time. When we count the Omer, we do not tap into the reality of the Omer, we create it. Time does not create the Omer; we do. This is why there is no specific date mentioned for Shavuot in the Torah. Shavuot — and Matan Torah — are not tied to a specific day (the sixth of Sivan); it is the result of the forty-nine days that we count. The fiftieth day, the day of Shavuot and Matan Torah, emerges from the forty-nine days of counting. We bring it into existence. This is why the holiday of Shavuot literally means “weeks” — the seven weeks that we count create the holiday of Shavuot. (Shavuot also shares the same root as the word Sheva (seven), reflecting the seven weeks that creates the Chag of Shavuot.)

Connecting to the Infinite

Just like the teenager in the introductory story, we all struggle to connect with the infinite; to see the spiritual within the physical; to find genuine meaning and purpose in an often turbulent and chaotic world. It can feel overwhelming — if not impossible — to build a skyscraper; the task is quite daunting. However, the key is to have the ultimate goal in the back of our minds while we focus on each individual day, trying our best to place each individual brick perfectly while we build toward our ultimate destination. Each day of the Omer is a new brick — a new part of our journey toward Matan Torah, toward the infinite, and toward marrying Hashem. May we be inspired to create something magical as we build toward Matan Torah, one day at a time.

Rabbi Shmuel Reichman is an author, educator, speaker, and coach who has lectured internationally on topics of Torah, psychology, and leadership. He is the founder and CEO of Self-Mastery Academy, the transformative online self-development course that is based on the principles of high-performance psychology and Torah. After obtaining his Bachelors degree from Yeshiva University, he studied at RIETS, received a Masters degree in Jewish Education (Azrieli), and a Masters degree in Jewish Thought (Revel). He is currently pursuing a PhD at the University of Chicago and has also spent a year studying at Harvard as an Ivy Plus Exchange Scholar, completing graduate coursework there as part of his PhD. To find more inspirational lectures, videos, and articles from Rabbi Reichman, or to learn more about Self-Mastery Academy, visit his website: www.ShmuelReichman.com