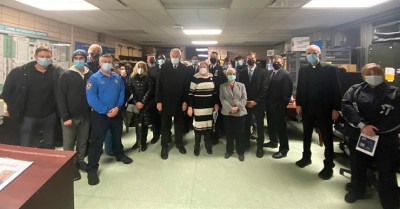 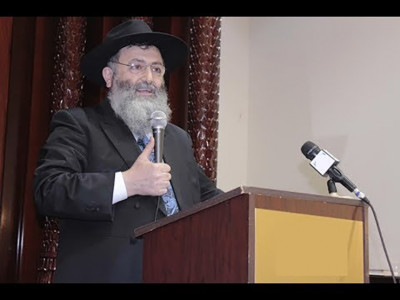 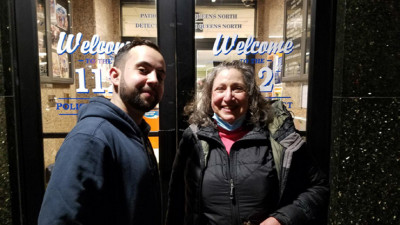 This past Thursday evening, I paid respects to police officers (now detectives) Wilbert Mora and Jason Rivera of the 32nd precinct, who reached their end of watch two weeks prior on January 21. The communal gathering held at the 112th precinct in Forest Hills, under the helm of Commanding Officer Deputy Inspector Joseph E. Cappelmann, was well attended. “I came out to honor the life of the police officers who were killed in the line of duty,” said David Shakhmoroff, who attended on behalf of Chaverim of Queens. “I was unable to attend the funerals and felt joining this tribute is a small way to honor the passing of these heroes who lived their life to protect us.”

The program began with the Deputy Inspector leading with the American Legion Honor Guard and the Pledge of Allegiance, followed by opening remarks by Heidi Chain from the precinct community council and blessings from Rabbi Gerald Skolnik of the Forest Hills Jewish Center and Bishop Paul Sanchez, Episcopal Vicar of Queens and pastor of Our Lady Queen of Martyrs Parish. Prior to the distribution of candles for a private lighting ceremony, Congress Member Grace Meng, Queens District Attorney Melinda Katz, State Senator Joseph P. Addabbo Jr., Assembly Member Andrew Hevesi, and Council Members Lynn Schulman and Robert Holden all addressed the gathering. State Senator Toby Savisky was scheduled to attend. The words repeated by all were embraced by Meng. “They sacrificed their lives to protect New Yorkers and our city will never forget them.”

“The spike in crime and gun violence our city has seen is beyond outrageous. We must continue to stand behind the police and press our elected officials to modify the bail reform laws to empower our police force to be able to properly do their job and keep our streets safe,” explained Avraham Pinkhasov, who represented Queens Borough Safety Patrol Shmira at the vigil. “Policing is not the job of just officers in uniform; it is a joint effort between the police and the community. When the community advocates for safety and peace, it requires standing behind our men and women in blue and working together. This will enable a city that is clean and peaceful.” Pinkhasov urged the community, “Next time you see a cop on a street corner or stopped at a light in a patrol car–instead of just walking past them, stop and thank them for risking their lives to protect your life and the lives of your loved ones. The more support you show law enforcement, the more they will want to serve unconditionally.”

The program was coordinated by the precinct’s community council in support of the precinct and Patrol Borough Queens North.