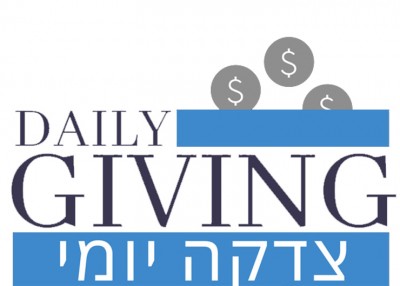 In a show of unity that is refreshing to witness during this dark period of our lives, many of the leading rabbis in the Orthodox community have voiced their public support for DailyGiving.org, a unique online effort to easily allow individuals to give $1 to tzedakah every day.

“The biggest reason we have been able to grow from zero to more than 2,200 members, and why we have already raised more than $1 million for 42 charities, is the support we have received from many well-known rabbis, who have been willing to encourage their followers with public pronouncements to sign up for DailyGiving.org and to give $1 of tzedaka (charity) each day together as a community,” said Donath.

Rabbi Eitiel Goldwicht, the founder of Aish Israel, said, “When B’nai Yisrael gave money to build the mishkan, every individual gave the exact same amount – no matter how rich or poor they were. That’s the charity that Hashem loves the most. Today we have a similar opportunity. DailyGiving.org asks everyone to give the same amount, just $1 a day, to support various charitable organizations.”

Rabbi Zecharia Wallerstein, founder and director of Ohr Naavah, said, “Since nobody is going to shul today, there is no one who is going around collecting tzedaka every day. With DailyGiving.org, even if you’re not in shul, you can still give $1 a day to tzedaka.”

Rabbi Daniel Staum, popular author and lecturer, said, “I get envelopes in the mail every day from needy charities. Many of them are worthwhile organizations, but the reality is that I cannot give tzedaka to all of them. Now there’s a beautiful way that you can give a dollar a day to tzedaka, every single day, by signing up for DailyGiving.org. And each day your dollar goes to a different charity.”

Rabbi Fischel Schachter, author and Rebbe at Torah Vadaas in Brooklyn, NY, said, “We need to do things together, but unfortunately because of social distancing requirements, we are now prevented from this. However, if you sign up for DailyGiving.org, you can give $1 a day to tzedaka, and the money adds up because many others are doing the same thing. The more people who sign up, the more powerful the program becomes. At a time that we are looking for more ways to get together, DailyGiving.org allows up to give tzedaka b’tzibbur.”

Rabbi Gavriel Friedman, noted speaker and Rebbe at Aish Hatorah in Yerushalayim, said, “There are a lot of people who give tzedaka. There are some who give every day. But how many people can say that they give tzedaka every day, and that it gets distributed to 42 different worthy organizations? DailyGiving.org allows you to do just that. It is the most transparent charitable platform you will ever see. Every dollar that is contributed goes directly to a different organization, from bikur cholim to feeding the poor to teaching Torah. When you sign up for DailyGiving.org, you join together with thousands of others – and every day another organization benefits from the dollar that you and each of the other members have contributed.”

Rabbi Paysach Krohn, author of the best-selling Maggid series of books published by ArtScroll, said, “You will be amazed at what DailyGiving.org is doing. Sign up to give $1 of tzedaka each and every day. Many of our charitable organizations are unfortunately struggling today to raise funds, but DailyGiving.org is contributing more than $2,200 a day, every day, to a different organization. It’s one of the greatest organizations in Klal Yisrael.”

Donath said, “Imagine the impact that your single dollar of tzedaka each day can make when it is combined with so many others.  And imagine waking up every morning and knowing that no matter what else you might do that day, you have already performed the mitzvah of tzedaka. Lately, many people are signing up in honor of those who need a refuah shleima and others are signing up to Lilui Nishmat a loved one. It’s really unbelievable what’s happening.”

Here’s how the program works:

Donors sign up to give as little as $1 a day, and decide whether they want their recurring contribution to be charged once a month or once a year. (The transaction fee would be too high to charge daily.) DailyGiving.org acts as a shaliach or “messenger” and distributes the money each day. Everyday donors receive an email, telling them which of the 42 participating charities received the DailyGiving.org donation that day, and how much was donated.  As the number of donors grows, the amount of each daily donation grows—even though each person’s donation amount remains the same.

Donath said that DailyGiving.org, which is a recognized 501(c)3, takes zero money, and does not spend any of the charitable money it collects on administrative costs.  “We are run strictly by volunteers, so every dollar that is donated goes straight to the recipient organizations.”

To sign up for DailyGiving.org, please visit www.DailyGiving.org. It takes only 30 seconds, and you will absolutely love being a part of this rapidly growing organization.