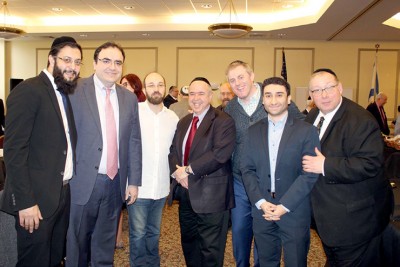 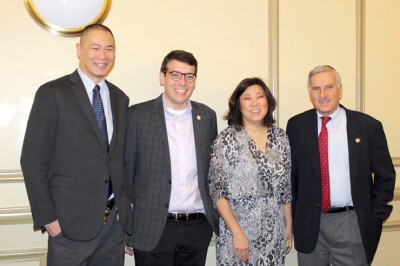 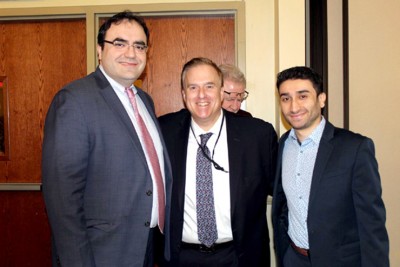 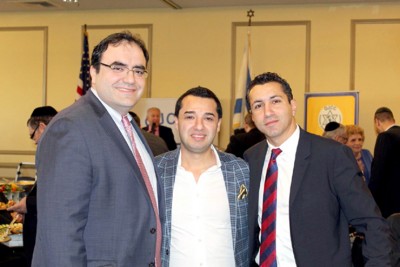 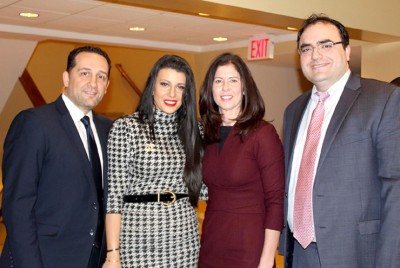 Queens Jewish Community Council, the nonprofit that represents the interests, promotes culture, and provides social services to the sizable and diverse Jewish population of this borough held its annual legislative breakfast at the Young Israel of Jamaica Estates last Sunday. The lawmakers present spoke of their efforts to strengthen the connection with Israel and serving the needs of the Jewish community.

“I found hope in the ways that the communities have come to support each other,” said Rep. Grace Meng, in reference to the rallies against antisemitism last month in downtown Manhattan and Forest Hills where Jews and gentiles stood together. “We had a workshop for community leaders on homeland security grants.” At that meeting, representatives of all Jewish denominations and other religions spoke of their shared security concerns.

Recently inaugurated District Attorney Melinda Katz, who enjoys support in the community was welcomed amid applause and spoke about teaching tolerance from a young age. “We are facing difficult times. We are facing antisemitism and xenophobia and simply hate language. We call it out when it needs to be called out.” Katz then provided an example from home, when she heard her sons using an objectionable term during a chess game. “I call my children out on anything that they wouldn’t say in public.”

With Katz now serving as the borough’s top prosecutor, her previous position at Queens Borough Hall is vacant. “We have a special election for Queens Borough President on March 24,” QJCC President Mike Nussbaum reminded the breakfast crowd, which included candidates Elizabeth Crowley and Donovan Richards. Costa Constantinides was also scheduled to appear but was picking up his wife from a hospital that morning.

Last year QJCC celebrated its 50th year of service and it continues to welcome younger activists in the community. At this year’s breakfast, Nussbaum administered the oath to four young Bukharian Jewish professionals joining the QJCC Board: David Aronov, Manashe Khaimov, Emanuil Kalendarev, and Victoria Zirkiev. They were offered heartfelt congratulations by Board Members Svetlana Levitin and Rabbi Yaniv Meirov, who were pleased to see more Bukharian Jews taking an active role in the larger Jewish community around them. At the breakfast, Rabbi Meirov was also promoted to an Officer within the QJCC.

Aronov is a former staffer for Councilwoman Karen Koslowitz who is now a lead organizer for Census 2020, the federal effort to get everyone in Queens to participate in the once-in-a-decade population count. “It is especially important in Queens, as it has been historically undercounted,” said Met Council CEO David Greenfield. “Every decision the government makes in its budget is based on census information.”

Aronov’s task is to hire field workers, attend events of every community in the borough, and encourage as many people as possible to sign the census form.

Kalendarev is a member of Community Board 6 and the founder of Rego Park Seniors Club, which offers programs and services for elderly people in his community. “Our mission is to cater to the most vulnerable people in our communities and offer them a place where they can feel comfortable,” he said.

Khaimov is the Director of Community Engagement and Development at Queens College Hillel, where he runs the Mizrahi Lead and Meros programs to engage with Sephardic and Bukharian students, teaching them culture, religion, and offering career connections. He is also a board member of Bukharian Jewish Union and a lecturer at Limmud conferences.

Zirkiev has been producing concerts for some of the top names among observant Jewish performers, offering Jewish youth an exciting alternative to secular entertainers whose lyrics do not reflect Torah-based values. She also founded a real estate development firm with her husband Shalom, and they both are longtime supporters of Chazaq.

Councilwoman Karen Koslowitz, the most senior lawmaker at the event warmly welcomed City Council Speaker Corey Johnson, describing his ability to connect with communities and help the most vulnerable. “I have a piece of paper on the back of my apartment door. It reads ‘Do the most good for those who need it the most,’” he said.

“It is part of my faith to denounce hate,” John son said. He noted that the City Council created the mayoral Office of Hate Crime Prevention, allocating all the funding it needs to function.

Concerning Israel, Johnson spoke up forcefully against BDS. He has been to Israel four times so far: once as a tourist and the other times with his colleagues on Rabbi Michael Miller’s JCRC trip. “I’ve seen how Israelis express themselves freely. I’m unabashed opposed to BDS. It is hateful and it is about the destruction of Israel. It is important for non-Jews to speak up year-round.”

With Mayor De Blasio’s term ending next year, Johnson declared his candidacy for the office very early. At the breakfast he announced that Shimi Pelman will be advising and guiding him. The founder of Tomchei Shabbos of Queens is also a Democratic District Leader. His endorsement is crucial for candidates seeking to better understand the Queens Jewish community through its events, institutions, and people.

If elected, Johnson would be the city’s first openly gay mayor. As his supporters note, his experience in reaching out to all communities and life story of poverty-to-success makes him poised for the job of representing this microcosm of the world that is New York City. The funding that he provided for holocaust survivor programs, combating antisemitism and support for Israel in a party where BDS is gaining followers, have made Johnson a vital ally for the Jewish community.

Council Members Barry Grodenchik and Rory Lancman were also present at the breakfast, as were Comptroller Scott Stringer, Assembly Members Daniel Rosenthal, Ed Braunstein, and Nily Rozic; State Senators Leroy Comrie and John Liu, and staffers of the Mayor and Rep. Tom Suozzi. All have strong progressive records on many economic, environmental, and social issues, while remaining steadfast in their support of Israel.

Among aspiring lawmakers, the breakfast is a place to gauge the pulse of the Jewish community and seek its support. Former cop Steven Lee is running in the downtown Flushing Assembly seat held by Ron Kim. He noted that Kim is too far to the left, supports Bernie Sanders for president, and opposed an Amazon headquarters in Queens. His district has few Jewish voters, but Lee understands that endorsements matter, and the potential to find helpful staff, volunteers, and advice.

In a time of increased antisemitic incidents, it is comforting to see nearly the entire political class of Queens and those seeking to join the club, offering support to QJCC and the numerous services that it provides to the community.