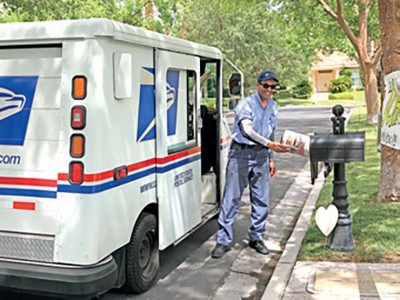 The Shulchan Aruch discusses the delivery of mail by non-Jews on Shabbat. Is it permissible to drop a letter in a mailbox on Erev Shabbat, which will be delivered on Shabbat? The Shulchan Aruch establishes a clear rule: It is permitted, as long as the non-Jew is paid a fixed price and he was not instructed to deliver it specifically on Shabbat. If these conditions are met, it is considered that the non-Jew is working for himself, and it was his choice to deliver the letter on Shabbat. This principle can be applied to modern-day mail. The postage stamp is the fixed payment. When one puts the letter in a mailbox before Shabbat, he is not telling the non-Jew when to deliver it. Even though there is a sign on the mailbox that says it will be emptied on Shabbat, it is not a problem, since the Jew did not ask the non- Jew to deliver it on Shabbat. It does not make a difference to the Jew whether the mail carrier comes on Shabbat or Motzei Shabbat. Moreover, there are additional factors to be lenient. First, the non-Jew is coming not only for the letter of the Jew; he is coming because of the other letters in the mailbox as well. Also, he is not directly in the employ of the Jew; he has a salaried position working for the government. Therefore, it is clearly permissible to drop a letter in the mailbox before Shabbat. This is the opinion of the Shevut Yaakov in his responsa and it is accepted by Chacham Ovadia and Chacham Ben Sion. This leniency applies also to leaving letters in the personal mailboxes of private homes, and not just public mailboxes. There is no issue of Marit Ayin that an outside observer would think that the Jew gave the letter to the mail carrier on Shabbat. Everybody knows that postal workers walk onto the porch every single day of the week. However, it is prohibited to personally hand the mail carrier the letter on Shabbat. The Shulchan Aruch clearly rules that a Jew cannot engage a non-Jew to do work on Shabbat, even for a fixed fee. It would also be a problem to raise the indicator flag of the mailbox on Friday. Actively calling the mail carrier’s attention to the letter is tantamount to asking him to pick up the letter on Shabbat. It would also be a problem to raise the flag on Shabbat in advance of placing letters after Shabbat. This would constitute Hachana-preparing for after Shabbat.