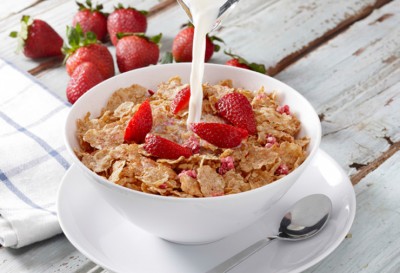 If a person eats cereal with milk, the cereal constitutes the "Ikar" – the primary component of the mixture, whereas the milk is "Tafel" – secondary – as it is added merely to enhance the cereal. Therefore, one recites only one Bracha, over the cereal, and this covers both the cereal and the milk. Even if some milk remains in the bowl after one has eaten all the cereal, and one wishes to drink the milk, he does not recite a Bracha over the milk, since the milk had been covered by the Bracha recited over the cereal. If one adds fruit to yogurt, which is very common, then in most instances, the fruit would be considered secondary to the yogurt. Normally, one adds just a few pieces of fruit to enhance the yogurt’s flavor, such that the yogurt is considered the primary component, and the fruit, the secondary component. As such, one would recite only "Shehakol" over the yogurt, and this Bracha would cover both the yogurt and the fruit. However, if somebody puts a large amount of fruit in the yogurt, such that he eats mainly fruit with some yogurt mixed in, then he would recite only a Bracha over the fruit, and this Bracha would also cover the yogurt.