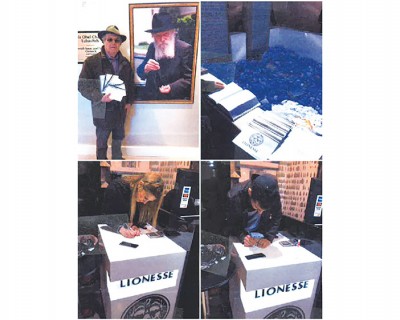 I would like to thank all the readers of the Bukharian Jewish Link. We have received a very positive response to many articles and columns, and the newspaper as a whole.  Over the past seven months, I have been approached and called not only by young, English-speaking, new-generation Bukharians, but also from the older, more Russian-speaking, traditional Bukharians. Many have said that they were waiting for something like this for a long time. Baruch Hashem, we are going strong and slowing growing deeper in to the distant communities.

However, we need your help. We need everyone to let their friends, families, cousins, uncles, coworkers, and other acquaintances know about this great project, the Bukharian Jewish Link. Send them links to the paper, let them sign on to our bi-weekly emailing list, and let them get inspired.

After the distribution of the 15th edition, I received a call from an older American businessman, who works in the garment industry. He had personally called the number in the newspaper, thinking he would reach the office. He told me that he found the publisher’s letter very inspiring and that he enjoyed it very much. He then asked who I was, and when I told him that I was the publisher, he was even more thrilled to know that he was talking to the individual who wrote the message.

He had called me because he wanted to share his own inspirational situation, which happened to him at a Las Vegas garment show. Below is his story. We would like to ask the community to share their inspirational moments with us by emailing your stories to This email address is being protected from spambots. You need JavaScript enabled to view it.. We will publish as many as possible. Thank you everyone.

Letter to The Lubavitcher Rebbe

My apparel company recently exhibited at The Las Vegas Convention Center. I had a great business day Monday.

After the show, several of the fellows also exhibiting went out for dinner at a kosher restaurant.

After coming back to The Venetian hotel, I took a stroll around. As I was walking past a beauty store, a young girl approached me and offered, ”Here is a free sample package of lotions for your skin.” I told her no thank you and asked her if I may come into the store to sit down. She said yes. I then asked her name and where she was from. She said her name is Orit and she is originally from Israel.

She then asked me where l was from and I told her I’m from New York attending the apparel show at the convention center. She asked when I was going back to New York and I told her Wednesday morning.

Then she looked me in the eye and asked for a very special favor. What could she want from me? Orit asked if I would please take a letter to the Lubavitcher Rebbe’s resting place. She needed a blessing from the Rebbe.

I was floored, and of course said I would take her letter with pleasure.

The owner of the store then walked in and asked what was happening. Orit told the owner, Yosef Yitzchak, that I was going to take their letters to the Lubavitcher Rebbe’s resting place in Queens.

He also wanted to write to the Rebbe asking for a blessing. I now had five envelopes to take to the Rebbe. I left the store in awe of what just happened.

On Sunday morning I went to the Rebbe’s resting place in Cambria Heights with the five envelopes.

Thank You, Hashem, for giving me the opportunity to do this Mitzvah and may we all continue learning Torah and performing mitzvot until the arrival of Moshiach Tzidkeinu.