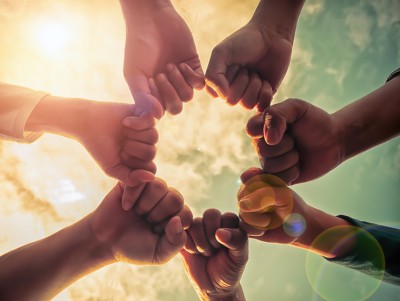 It was the seventh of Adar; the final day of Moshe Rabbinu’s life. He had begun conveying his last will and testament five weeks earlier, on Rosh Chodesh Shevat. His epic words to the nation are recorded from the beginning of Chumash Devorim through the end of Ki Tavo. Now he was coming to the end.

Moshe began by declaring, “You are all standing here today, before Hashem, your G-d.” A Jew is not merely obligated to personally observe the Torah and fulfill his spiritual duties, but he is responsible to do his utmost for his fellow Jew as well.

This became a fundamental tenant of our faith. We are a nation who must stand together. The collective good of the nation affects us all, and we dare not turn a blind eye or deaf ear to the needs of our brethren.

We live in a very selfish world!

Everyone today is busy on their phones and various other devices. You can hardly have a conversation today that merits anyone’s full attention. There is also a prevalent sense of entitlement, and a lack of patience for the requite struggles needed to achieve success. That’s why there’s hardly any concept of a starter home; everyone wants to go straight to the top.

We see it in sports too. There was a time when someone scored a touchdown, and then moved on. Today, the scorer performs an arrogant dance ensuring that everyone know how wonderfully he did.

The Mishna in Avos says – “If I am not for myself, than who will be for me?” That means every person has fulfill his role in life. But the next line of the Mishna states – “If I’m only (thinking) about myself then what am I (worth)?!”

“In my opinion, this idea is hinted at in Hillel’s words, as he used to say, “If I am [not] for me, who will be for me? And when I am for myself, what am I?” It is fitting for each person to strive to be concerned for himself. But with this, he must also strive to understand that “I for myself, what am I?” If he constricts his “I” to a narrow domain, limited to what the eye can see [is him], then his “I” – what is it? Vanity and ignorable. But if his feelings are broader and include [all] creation, that he is a great person and also like a small limb in this great body, then he is lofty and of great worth.”

In other words, according to Rav Shimon, to Hillel the word “ani – I”, has a specific technical meaning. In the ideal, “ani “, a person’s sphere of concern and self-interest, can include the entire world. It will essentially include whoever one allows his sense of “ani” to include.

It’s been said that EGO is an acronym for Easing G-d Out!

Rav Zev Leff notes that it isn’t a coincidence that Avraham, who was the paragon and ultimate doer of chesed, was also the first to recognize and truly believe in Hashem. When there is place in one’s heart for others, then one can come to believe in G-d too. But when one’s “ani” is limited to himself and doesn’t include anyone else, it cannot include Hashem either.

A couple once came to Rav Shlomo Zalman Aurebach zt’l to receive a Bracha following the birth of their son and to discuss a disagreement they were having. The father wanted to name his newborn son Yonatan, but the mother adamantly refused. “There’s an ayin hara on that name!” she asserted. “Our upstairs neighbors had a son named Yonatan and he passed away at the age of eight.”

The father dismissed his wife’s concerns. “Do you think that whenever someone passes away at a young age no one else can ever be given the same name?” he demanded.

Rav Shlomo Zalman listened to the couple and congratulated them on the birth of their son. Regarding how to name the child, he thought for a moment, closed his eyes, rested his head on his fist, and finally said, “It isn’t a good idea for you to name your son Yonatan.”

Rav Shlomo Zalman then gave the couple a warm farewell, declining their invitation to serve as the sandek at the brit and offering a suggestion of someone else who could fill that role. The father left Rav Shlomo Zalman’s home in a state of shock and disappointment. While he had readily accepted the ruling, he also found it puzzling. A short time afterward, the father happened to daven at Yeshiva Kol Torah, and as he was leaving, he encountered Rav Shlomo Zalman emerging from one of the classrooms. The father hurried to accompany the gadol out of the yeshiva, and as they walked, he reminded Rav Shlomo Zalman of their conversation at his home. The gadol remembered the discussion, but uncharacteristically did not smile. Unable to contain himself, the avreich asked, “Is the rov actually worried about ayin hara?”

“Not all that much,” Rav Shlomo Zalman replied, this time with his familiar smile.

“Then why did the rov tell us not to name our child Yonatan?”

Rav Shlomo Zalman placed his hand on the young man’s shoulder and said, “You told me that your upstairs neighbor had a son named Yonatan, correct?”

“And he passed away,” Rav Shlomo Zalman continued.

“Just imagine what would have happened in a few years,” Rav Shlomo Zalman concluded. “When your son is playing downstairs and your wife wants him to come home, she will call from the window, ‘Yonatan, come back upstairs!’ Just think for a moment about how your neighbor would have felt upon hearing those calls.”

After the passing of the Mir Rosh Yeshiva, Rav Nosson Tzvi Finkel z”l, R’ Mordechai Grunwald, the executive director of Yeshivas Mir and close talmid of R’ Nosson Tzvi, was asked to deliver a hesped at the Yeshiva Gedolah of Teaneck. Amongst many stories that he told about R’ Nosson Tzvi, he related the following:

Approximately 15 years before Rav Nosson Tzvi’s passing, there was a family from New York who lost their father, a distinguished Talmid Chacham, and talmid of the Mir. Rav Nosson Tzvi Finkel zt’l had a particularly fond relationship with the deceased father and took it upon himself to ensure that his orphans will have a fatherly figure to turn to and that they will receive proper chinuch. He told the children to correspond with him through letters and that they can ask him any question that they have on their minds or write to him about any issue they may encounter. R’ Nosson Tzvi kept photos of these orphans in his pocket as a constant reminder of his “other” family.

The children took advantage of their surrogate father and would correspond with him about everything. Rav Nosson Tzvi, with great difficulty due to his Parkinson’s disease, would write back letters in response. This went on for many years until the boys grew up and came to Eretz Yisroel to learn in Yeshiva. R’ Nosson Tzvi got the boys into various Yeshivot that catered to each one’s uniqueness. Every Friday night, the boys could be found enjoying their Shabbat Seudah at the table of the Rosh Yeshiva.

After R’ Mordechai Grunwald completed the hesped, he was approached by one of the kollel members of Yeshiva Gedolah of Teaneck who related the following: “The story about the orphans is unbelievable, but it doesn’t end there… There was an 8-year-old girl among those 4 orphan boys. Unlike her older brothers, she didn’t know how or what to write to R’ Nosson Tzvi. After a while of not receiving any letters, she was saddened that she didn’t have a close relationship with the Mir Rosh Yeshiva. That sadness was transformed when her mother handed her a letter from Yerushalayim addressed to her. She excitedly opened the letter and pulled out the paper inside. It was a hand-drawn picture of a large heart shape with a loving message to her, signed by Rav Nosson Tzvi on the bottom. Since her father had died, she never felt so loved. That little girl was my wife, and to this day she recalls how happy that letter made her feel.”

A kallah on her wedding day dressed in her gown was seen making rounds from bed to bed in a hospital. When asked why she explained that she was taught that on the day of her chupah she has an incredible power to give Brachot, and so she wished to share that power with those sick in the hospital.

When we speak of gedolim and people of greatness, it’s never only about their stature in Torah, but also their incredible sensitivity. It’s also about how their “ani” encompasses all of Klal Yisroel.

We may not be on the level of gedolim, but every one of us has a responsibility to live beyond ourselves. We stood at Sinai together and accepted the Torah. Then we stood again in unity on the outskirts of the Promised Land, on the final day of the life of our greatest leader. There we pledged to be a nation – united in purpose, heart, and soul.

Rav Yisrael Salanter quipped that the greatest merit one can have when being judged in the celestial courts, is to be a person needed by others.

There can hardly be a greater merit for us on Rosh Hashanah.