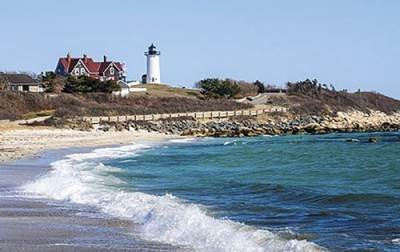 A few years ago, Chani and I spent some time vacationing on Cape Cod. During one of those days we took a ferry to Martha’s Vineyard where we rented some bikes to pedal along a beautiful trail that ran alongside the bay. As we proceeded we enjoyed the scenic panorama all along the way. A few times way we stopped to rest, take a breather, and take a picture or two. Each time Chani asked me if we could meander around the area and enjoy the views in the serene setting. But I was set on getting to the end of the trail in the village of Eatontown. I was sure the sight at the end of the trail was most breathtaking of all and would be worth the extra exertion to get there.

When we got to Eatontown we were quite disappointed. It was indeed a peaceful and pleasant town bordering the water. But it was nothing like the idyllic vacant path we had just traversed. There were stores, restaurants, cars, and regular pedestrian traffic, as in any town. I had foolishly forged on to complete the path, but in doing so I had forfeited the enjoyment we could have had if I would have allowed myself to enjoy the moment.

Isn’t that the story of our lives? Aren’t we always thinking that just around the next bend is the key to happiness?

Someone once noted that people often rationalize that at the next stage of life they will be able to appreciate what they have. A child feels constrained and thinks his adolescent years will grant him maturity and identity. The adolescent pines for early adulthood when he will have free reign over a car, set his own guidelines and live a blissful, self-regulated life. The young adult who is dating and/or trying to make a living is certain that as soon as he/she finds a spouse and a good job life will be set. Then children come along with all the challenges of child-rearing along with its tremendous responsibilities. The parents are sure that as soon as the children are married and self-sufficient, they will be able to retire and enjoy their golden years. When those years finally arrive, even if one is blessed with self-sufficient children who have families of their own, he/she cannot help but wonder where life has gone, and what has become of the wonderful memories of years gone by. “Why didn’t I appreciate it then?!”

When Hurricane Sandy walloped us a few years ago, it was very challenging. During such trying moments one can only focus on one day at a time. No one knows when power will go back on, whether businesses and schools will open tomorrow, or whether the gas crisis will finally resolve itself. Even an imminent landmark presidential election with massive ramifications which  riveted the attention of the nation for months, was temporarily put on hold as people focused on survival and basic needs.

The refrain expressed repeatedly was “we lost a lot but thank G-d we are all safe.” The moments when people heroically rise to the occasion, appreciate what they have, and live in the moment also linger for a long time.

Surely we do not want such tragedies to ever strike us. But if somehow we can hold onto that appreciation for the moment we would live more enriched and happier lives.

A few years ago,  our community lost a mentor who taught us this lesson by example. Howard Israel a’h, was a dear friend, who seemed to have a perpetual smile etched on his face. At his funeral his wife Susan remarked that she remembers only 4 times (!) during 31 years of marriage when she saw Howard become angry. And each time he calmed down relatively quickly and it was over. Another son noted that he had never seen his father get angry - ever!

Even during his last two years while he was ill and feeble he never lost his drive and zest for life. No matter how physically drained he was from treatments and surgeries, when asked how he was his answer was always the same – ‘fantastic’! He was never willing to capitulate. Shortly after completing brain surgery this summer, the day he was discharged from the hospital he walked in to shul for Mincha with that omnipresent smile on his face, to the shock of the kehilla.

We will miss him not only as a beloved neighbor and friend, but also as one who taught us not only how to count our days, but also how to make our days count by appreciating all of the blessings of life, including life itself.

Rabbi Dani Staum LMSW is the Rabbi of Kehillat New Hempstead, as well as a rebbe and Guidance Counselor at Heichal HaTorah in Teaneck, NJ, Principal at Mesivta Ohr Naftoli of New Windsor, and a Division Head at Camp Dora Golding. He can be reached at: This email address is being protected from spambots. You need JavaScript enabled to view it.. Looking for “Instant Inspiration” on the parsha in under 5 minutes? Follow him on  Torahanytime.com.