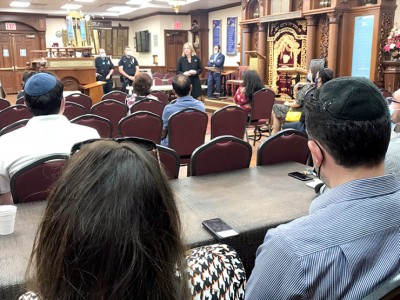 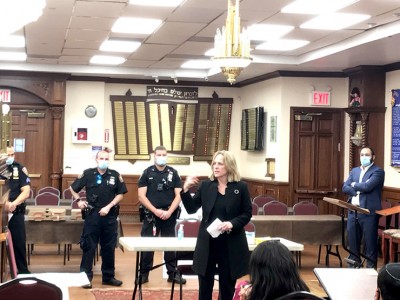 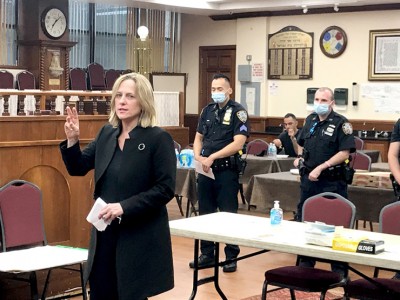 A new patrol paradigm exists in today’s ever-changing world. The cornerstone of today's New York Police Department is the concept of Neighborhood Policing, a comprehensive crime-fighting strategy built on improved communication and collaboration between local police officers and community residents. Neighborhood Policing has been documented to greatly increase connectivity and engagement with the community without diminishing, and, in fact, improving the NYPD's crime-fighting capabilities. The NYPD has long encouraged officers to strengthen bonds with the communities they patrol, but past practice in precincts left little time or opportunity for true community engagement. In recent years, the Patrol Services Bureau has systematically reorganized its patrol methods to achieve the goal of establishing Neighborhood Policing in every precinct.

In attendance was the Honorable Queens District Attorney Melinda Katz who took from her time to join the meeting. Katz, a Forest Hills resident, is a family woman who brought along her beloved son Hunter, not wanting to spend too much time apart from those closest – family. Katz spoke of the uptick in gun violence in New York City, but reiterated that Queens was generally safe and was not falling victim to the gun violence plaguing other areas. The DA calmed her constituents' concerns of a jail opening nearby saying that such a project was stalled due to the pandemic and may never come to fruition. The notorious Rikers Island currently holds around 3700 inmates, a far smaller number than in previous years where it maxed at 7000.

A special division of officers supporting the sector officers and filling out each sector's team are two officers designated as the neighborhood coordination officers (NCOs). The NCOs serve as liaisons between the police and the community, but also as key crime-fighters and problem-solvers in the sector. They familiarize themselves with residents and their problems by attending community meetings with neighborhood leaders and clergy, visiting schools, following up on previous incidents, and using creative techniques and adaptive skills. The Forest Hills and Rego Park NCOs are Police Officer Kevin Nolan and Police Officer Krystle Gonzalez.

Together the NCOs are adding a new dimension to the NYPD's crime-fighting capabilities. They function as adjuncts to the local detective squads, responding swiftly to breaking incidents and developing leads and evidence that might have been missed under the old patrol model. Most importantly, they feel a sense of belonging and responsibility that fosters a willingness to do whatever it takes to keep the neighborhood safe and secure.

The Build the Block neighborhood safety meetings are a form of neighborhood policing that seeks to close the divide between cops and community. But it can only succeed with your support of the community. At the Build the Block meeting a strategic session was held between local police officers and the people they serve. The meeting had two simple goals. First, identify the public safety challenges of our specific neighborhood and then to discuss potential solutions. With the upcoming High Holidays upon us, the officers explained how a larger more noticeable police presence would be seen in the streets of our neighborhoods and how the NYPD would pay special attention to all synagogues. This was an effort of the department to take important steps towards improving trust, collaboration, and safety through neighborhood policing. The officers asked questions of the audience and discussed recent crime levels, car break ins and home invasions. The discussion about issues in our community was well received and allowed residents to have the opportunity to voice concerns about specific safety and policing challenges.

The NCOs are set to remain in our sector for the duration of their tour as they are Steady Sector Officers and are eager to make strong bonds with the community they serve and resolve local quality of life issues we may face. We all share responsibility for our neighborhood, its challenges and potential, because it is our home.

Neighborhood Policing divides precincts into four or five fully staffed sectors that correspond, as much as possible, to the boundaries of actual established neighborhoods. The same officers work in the same neighborhoods on the same shifts, increasing their familiarity with residents and local problems. The radio dispatchers, supervisors, and sector officers work together to maintain "sector integrity," meaning that the sector officers and sector cars do not leave the boundaries of their assigned sectors, except in precinct-wide emergencies.

Neighborhood Policing is sufficiently staffed to permit off-radio time for the sector officers, so they are not exclusively assigned to answering calls for service. Their off-radio time is used to engage with neighborhood residents, identify local difficulties, and work toward reasonable solutions. The sector officer plays the role of a generalist cop who knows and feels responsible for the sector, and who provides the full range of policing services there.

The meeting was organized by NYPD along with Avraham Pinkhasov as community partner and member of Queens Borough Safety Patrol – Shmira. Much credit is due to Beth Gavriel for opening its doors and for the Alliance of Bukharian Americans (ABA) for their active participation. The community of Forest Hills is encouraged to reach out to Avraham if a need arises, This email address is being protected from spambots. You need JavaScript enabled to view it..