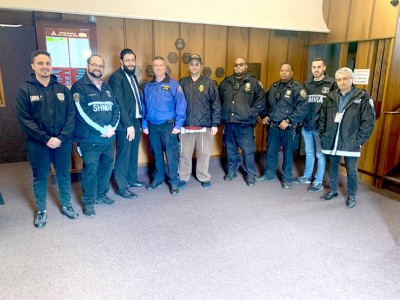 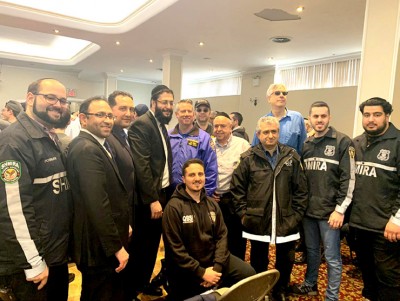 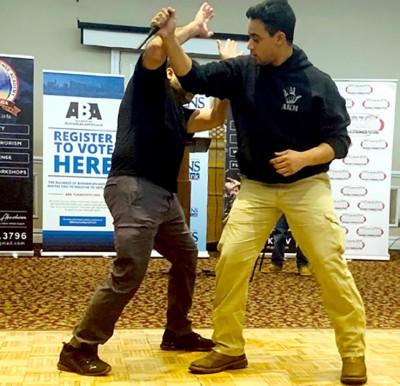 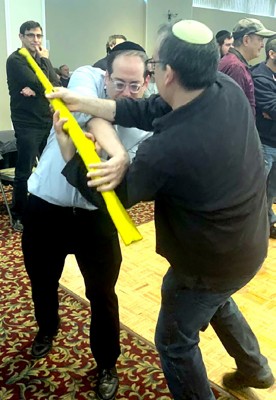 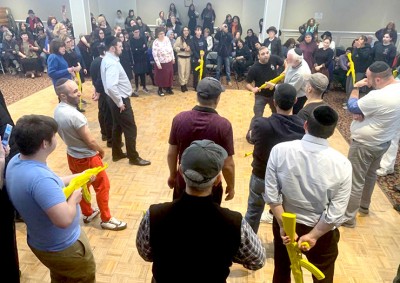 Well over 200 representatives from Kew Gardens Hills and its neighboring communities joined on Sunday afternoon, January 26, for an informative safety training course at the Young Israel of Kew Gardens Hills. Attendees were educated on safety tips and how to be better aware of their surroundings and were shown preventative behaviors and ideas for risk reduction when in precarious settings.

Yoni Dam, a volunteer with the Chazaq Organization a major sponsor of the project, rationalized the importance of self-defense training, “I have paid for similar instruction in the past and it is a quite productive aid when in danger. One should ensure they stay current on Krav Maga lessons with the vast array of available video content.”

The program was billed as an active shooter training course and it certainly lived up to its title. Active Krav Maga Master Avi Abraham who heads the New York Self Defense Academy was the lead sponsor of the course and is a security and counterterrorism expert. He led a detailed interactive training in active shooter situations, active stabbing assaults and random attacks on the street to name a few. “The intention of the event was to give participants a taste of various self-preservation techniques in preparation for more rigorous classes,” said Abraham.

Sam Sturm and Rueben Davis of Congregation Etz Chaim explained that “the lessons were quite interesting, but the community needs to arrange a full series of the hands-on course to gains its full benefits and learn precisely how to react when under attack.” Mrs. Julia Erlbaum from the same shul chose Abraham’s self-defense site as her prime out-of-pocket expense for extracurricular activities for four of her cherished children. “My kids have excelled at various levels in Active Krav Maga and all have acquired important skills while boosting their self-confidence.” Yehuda and Rochella Abraham have taken Avi’s classes prior and joined to support the community and learn how the applications can be applied in a group situation. “This was a great start for the community as a whole,” affirmed Yehuda.

The hype for the program was encouraged by the interaction of prominent community organizations and leaders including Councilmember Rory Lancman who addressed the crowd admiring the resolute of each attendee to learn self-defense mechanisms while sharing in their joint concern of the rise in anti-Semitism, “What we can do as individuals to keep our community safe has been missing from the conversation on safety.” Queens Borough Presidential Candidate Councilmemeber Donovan Richards explained that in his district of Far Rockaway they conduct drills as a “frontline of defense to be full prepared in yeshivos and all Houses of Worship.” The event was also cosponsored by YIKGH, YIQV, Queens Jewish Link, Bukharian Jewish Link, Shmira Queens Borough Safety Patrol, Met Council, Alliance of Bukharian Americans, Assemblymember Daniel Rosenthal and Chaverim of Queens. Community Affairs Police Officer Touhey made a notable appearance at the training.

Chava Miller attended with her daughter Sara because they have been “horrified by the hate crimes and wanted to learn of security measures that can be taken.” Chava elaborated that she comes home after dark and wanted to pick up some tips to keep secure when alone.

Some tips provided may seem obvious but certainly deserve review as they can easily save your life. We begin with a leisurely stroll down your block. Remain alert and keep your head raised; this rule infers one should avoid texting while walking. Often, we enjoy walking with our headphones or AirPods secured in both ears. This is a common mistake that hinders one from being prepared for an attack. Having your earphones in only one ear will allow you to be more vigilant of your environs.

Two Young Israel of Kew Gardens Hills members related their feelings. Arthur Klein expressed that the program was “a superb educational and awareness experience for our community to learn preservation and hopes the course evolves into more programming.” Herbert Kalatsky, took these words further saying, “we gained knowledge to stick up for one another in public.”

As youth we were taught to avoid confrontation at all costs and never walk into a scuffle or instigate an offense. Nonetheless, if one is heaven forbid placed in a circumstance where they are forced to defend themselves, go all in with the end goal to incapacitate the accoster. One should try to strike the goon with the palm of their hand as opposed to a straight punch, as this will give the defender more surface area to inflict damage and be less likely to sustain an injury to your knuckles, fingers or wrist.

If the scenario presents itself where you are provoked by an assailant or a gang of hoodlums, always make eye contact and extend a greeting. This tactic works for someone of any age from children to advanced seniors. If you are able, keep constantly walking around the foe as this will throw them of their game and prove that you are not an easy target. This ploy helps demonstrate that you will not stand for being marked as victim and is vital as you have already seen their face long enough to identify them to authorities.

Another KGH resident, Shoshana, had attended Abraham’s classes for upwards of four years and joined the public training as a show of solidarity with the community and to hone her self-defense skills.

It is all too commonplace for victims that carry weapons to have them used against them in the most vicious manners. Ensure that you only carry defense mechanisms that you have been extensively trained in and are comfortable using. This may include pepper spray, mace, knives, batons and other weaponries. Of course, uphold the law and carry only licensed and legal arms.

When in a tussle it is a great measure to be aware of the most vulnerable areas to cause injury. It was discussed earlier to use palm strikes; these hits should be directed at the facial areas specifically that of the nose and mouth. Then aim for enemy’s knees and never be afraid to give aggressive kicks to the groin and face as these will debilitate the attacker further.

If one finds themselves in an active shooter situation, the first response should always be to locate an ostensibly unobstructed avenue and run away from the chaos or to a hiding place. If these options are untenable one should attempt to fight back. A detailed training course available from NY Self Defense Academy will educate you further on techniques to protect against head assaults, knife or gun attacks and to better prepare for the unfathomable consequences of an active shooter happening through being able to utilize muscle memory practices when compelled.

A female senior who is a member of Yeshivas Ohr HaChaim’s Shabbos minyan stated, “The course was quite informative as we really did learn methods to protect ourselves from attack.” David Linn is the cofounder of the recently established Kew Gardens Hills Community Security who also cosponsored. Linn stated, “There was a definite need for this event in the community and we proudly took a giant leap forward together. As individuals we must never let our guard down always standing in unison.”

Cosponsor Cynthia Zalisky, Executive Director of the Queens Jewish Community Council, observed, “The enthusiasm of the audience must be noted. The community is most definitely ready, willing and able to stand up for themselves when beset with violence.”