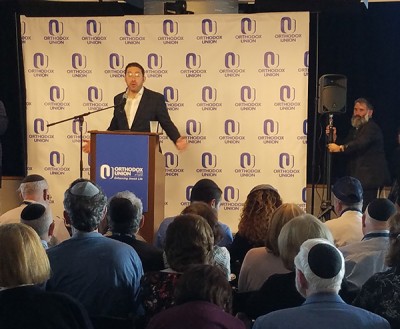 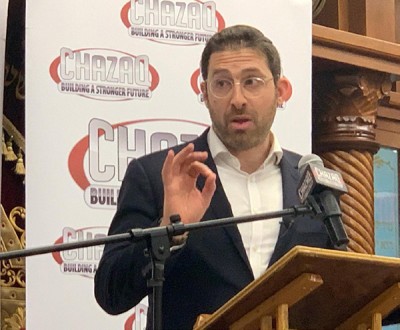 Charlie Harary, Esq is the prototypical definition for having impeccably intertwined the essence of his Jewish identity and the American spirit. In the business world, Charlie is respected as an investor and strategic advisor. Global Jewry have come to admire Charlie for his motivational talks and uplifting poetry of words. The prolific orator’s humble roots have traces right here having graduated Queens College magna cum laude. In Kew Gardens Hills, we have the privilege to interact with his dynamic dad “Moe” the proprietor of our very own Shimon’s Kosher Pizza. At the Orthodox Union’s recent Torah in New York day of learning at Citi Field, Charlie took a moment to give his Queens friends an extraordinary dose of chizuk during the auspicious days of the Aseres Yemei Teshuva.

“The first aspect of Yom Hadin is the idea of the ‘lev,’ – the heart. Hashem does not look at our deeds, He looks through our very heart.

The goal of Judaism is not to simply check boxes and tick off the mitzvos we complete, rather it is to create a profounder relationship with our Creator. So, not matter where you are in life and where you are in Judaism you can always pause and try to connect to Hashem in much more innate manner.”

We have now established that the first aspect during the Days of Awe is to realize that Hashem is looking for the lev – rachmana liba boyeh – He is looking for OUR lev. This expression often comes up when noting Hashem’s love. There is a general sentiment of caring and compassion embodied with emotional feeling.

Charlie delved deeper, “it is incumbent upon each of us to choose our own moment most noteworthy during the Aseres Yemei Teshuva where we can literally change our whole year by straightforwardly slowing down our days, our busyness and the treadmill of life and ultimately committing to establishing a much deeper relationship with Hashem this upcoming year.”

Charlie then enlightened us on the second item to consider. “We read on the first day of Rosh Hashana the concept of b’asher hu sham, literally translated ‘as he is there,’ documenting Hashem’s methods of arbitration.” Chalie illustrates this, “when we concentrate on the blasts of the shofar, pray intently without distractions, even if we would rather tune ourselves out, we choose to remain transcendent to Hashem’s heavenly force. The Almighty is evaluating us as individuals exactly as we stand on this precise day, He is not looking where we may have been yesterday, nor is He looking where we might be headed tomorrow.”

Rashi relates in the name of the Midrash, the angels beseeched of Hashem not to save Yishmael who was left to perish in the desert of Beer-Sheva since his children were destined to persecute and murder innocent Jews. Nonetheless, Hashem questioned, “What is he now virtuous or wicked?” as He could only judge Yishmael according to his present deeds, of being righteous, and not according to what may transpire in the future.

Charlie then culminated this awakening moment, “often in life we yearn to change… one may contemplate, ‘well I used to be’ pondering an abstract vision of how they see themselves while another may think, ‘I am going to be’ visualizing the figure they desire to become. We have not given ourselves the opportunity to stop and focus on who we truly want to be.”

The Yamim Noraim are all about who you want to be. They are about tapping into b’asher hu sham and being the person you want to be on that day. Once you achieve that exalted level of commitment, then Hashem sees the true you and judges you accordingly. G’mar Tov!