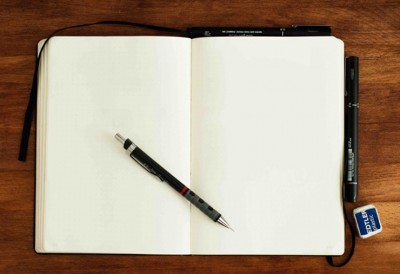 The other week, I was looking for a check I had received a few days earlier so I could bring it to the bank to deposit. To my disappointment, I couldn’t find it anywhere. I looked in every drawer in my office and on every shelf. I even went through the never-ending pile of papers on my desk, but it wasn’t there. I asked my wife and kids if they had seen it, but no one had. I uncomfortably asked that the check be reissued, knowing I would only find the old one after I had received a new one. (It’s just another example of Murphy’s Law. And to think, he is the governor of New Jersey.)

About a week later, I pulled a sefer off my shelf that I occasionally use. When I opened it, I discovered the check in the envelope, exactly where I had left it. I often use papers, tissues, business cards, or anything else at my disposal as bookmarks. I realized that when I was using the sefer a few weeks earlier, the check was in front of me, so I stuck it into the sefer as a bookmark. That was one expensive bookmark.

My rebbe, Rabbi Berel Wein, recently published a collection of essays from his years of writing, in a book called In My Opinion. He pondered that, in preparing the book, he enjoyed reading his old writings because he got a lot of good ideas from them.

In her wonderful book, Find Your Horizon, Elisheva Liss notes that when she reviews her writings from years earlier, she often cringes from her then dogmatic and preachy style. She finds her earlier writings to be bossy, over-confident, and pretentious. What’s more, she often doesn’t agree with her emphatic assertions of decades earlier.

Her words resonated with me because I recently came to the same conclusion about my own writings. This year, for my weekly Stam Torah essay, I have been revising and resending the first Stam Torahs I wrote before I was married in 2000.

I found that 20 years ago. I was much surer about myself and was much preachier. But life has a way of humbling people, and these days my suggestions are not nearly as authoritative.

It’s fascinating that our ideas, beliefs, and perceptions don’t remain fixed or static.

These days, many people seek ways to make themselves look younger. For our emotional health, however, it’s far more important to feel youthful, and that comes from constant growth, and not allowing life to stagnate.

The noted folk artist Grandma Moses (1860-1961) is famous for beginning her painting career when she was 78 years old. Since then, her works have been sold around the world and are displayed in many museums.

Neuroplasticity refers to the brain’s ability to learn new connections and behaviors in response to new information, experience, stimulation, development, or dysfunction. While it was once believed that the human brain was only developing in one’s youth, it’s now understood that the brain constantly changes throughout one’s life.

We are not the same people today that we once were.

A few weeks ago, a couple in Eastern France was enjoying a walk when they discovered a tiny capsule. They opened it and found that it contained a message sent by a Prussian soldier during World War I using a carrier pigeon.

At the time it was written, the message must have been important. But now, over a century later, it’s an irrelevant relic.

We constantly write the book and story of our lives by the choices we make and how we live our lives. Where the bookmark was placed yesterday in our book does not determine where it’s placed today.

I’m happy with this brilliant essay that I’ve written, but by next week I may hate it (in which case I’ll have something else to write about). What keeps life colorful is its fluidity, and what keeps our lives exciting is our ability to constantly change and grow.

The current pandemic has challenged us, but it also has forced us to mold and change our mindsets, behaviors, and attitudes.

Our personal bookmark and the world’s bookmark have been forcibly and irretrievably moved. Our role is to turn to and embrace the page where the bookmark has been placed and do our best to continue writing the most beautiful story we can.